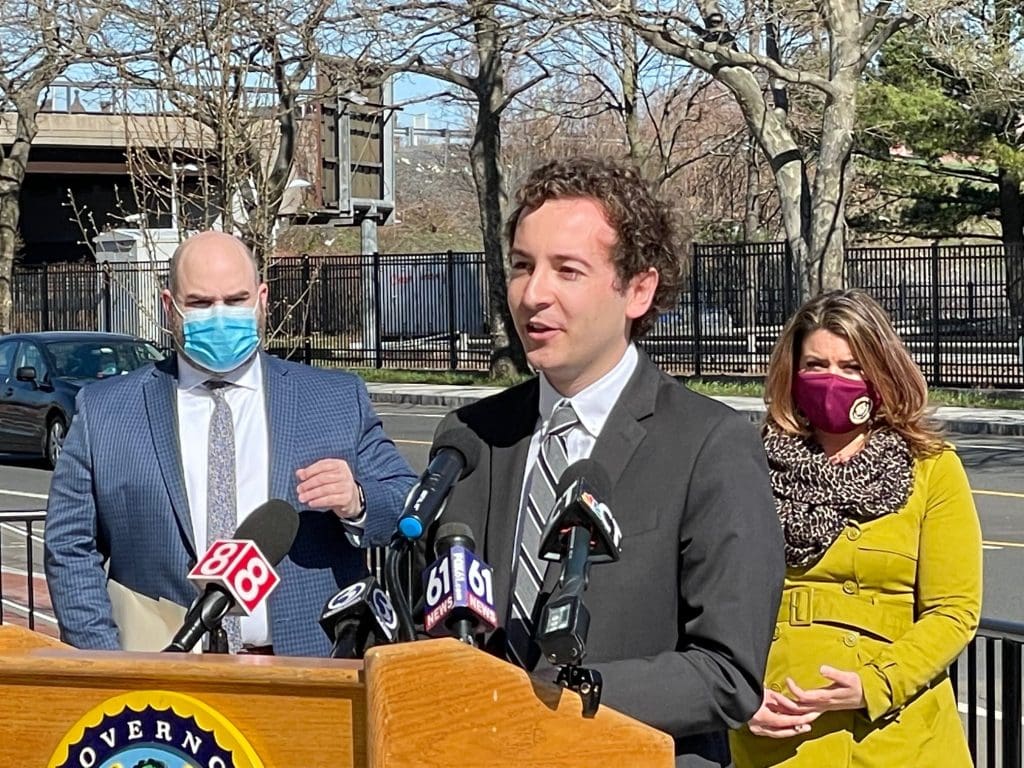 Sen. Will Haskell, then 24, made a generational appeal last year for TCI, the transportation and climate initiative. (Mark Pazniokas, CTMirror.org)

Will Haskell’s book about being elected to the Connecticut Senate as a 22-year-old isn’t out until Jan. 18, but here is a spoiler: It ends with an epilogue explaining his decision not to seek a third term in 2022.

Haskell, 25, a Democrat from Westport who unseated an entrenched Republican in 2018 and then handily won reelection in 2020, announced Monday he is stepping away from politics to enter law school in the fall.

“That was my plan before I started running for office,” Haskell said. “And if I don’t do it soon, I’m not sure I ever will. So it feels like the right decision. But that doesn’t mean it’s not a hard decision to make.”

His decision was personal as well as professional. Haskell recently became engaged, and he will be going to law school in New York, where his fiancée will be clerking for a judge.

Haskell’s election was one of the Democratic highlights of 2018, a year when the presidency of Donald J. Trump accelerated a Democratic trend in many of the Fairfield County communities in the 26th Senate District.

He unseated Sen. Toni Boucher, R-Wilton, with 53.4% of the vote in 2018, when Democrats made their first legislative gains in a decade, winning a 23-13 majority in what had been an evenly split Senate.

Haskell was reelected in 2020 with 58.3% of the vote and seemed well-positioned for a third term.

A slice of Democratic Stamford was added to the district, and all of suburban Bethel was removed, as were sections of New Canaan and Ridgefield.

His book is out on Jan. 18. It comes with an epilogue he wrote a month ago, just before it hit the printer.

But an open seat is an opportunity for a GOP trying to reverse two cycles of losses in the Senate and House. In a special election last year, Republicans recaptured one of the seats lost in 2018: the 36th District seat based in Greenwich.

The new 26th District includes all of Westport, Wilton, Weston and Redding, plus sections of Ridgefield, New Canaan, Darien and Stamford.

“All of that should shake out to make it actually a little bit safer territory for Democrats. But my overall feeling is that this is always going to be a tough race,” Haskell said. “It was a swing district when I ran in 2018. It was a swing district in 2020. Of course, national trends helped us out in both years.”

Incumbency most likely would have helped Democrats this fall had Haskell decided to run.

Haskell said he is open to a return to politics, an avocation he recommends to his contemporaries in his upcoming book, “100,000 First Bosses, My Unlikely Path as a 22-Year-Old Lawmaker.”

The title refers to the 100,000 constituents in every state Senate district in Connecticut.

Haskell was a prominent advocate of controversial measures aimed at improving mass transit and fighting climate change, including highway tolls and a regional Transportation and Climate Initiative. Even as a regular target of Twitter trolls, Haskell said he has found politics in Connecticut to be more productive than partisan.

“What I’ve learned along the way is that politics actually does work. It’s not as partisan as people think,” he said. “A lot of really great work happens on the state level, whether it is deciding the quality of the air we breathe and the quality of the roads we drive or the schools that we go to. And a lot of that work happens sort of outside of the headlines, certainly outside of the rancor of cable news. And it’s inspiring stuff.”

He said he will miss the state Capitol.

“I walked into that building much more pessimistic about the state of politics than I am when I’m leaving,” Haskell said. “I ran because I thought that winning was possible, but I never thought that it was probable. I was as surprised as anybody on election night.”

Stamford will be in three districts under the new map. The 26th District currently represented by Sen. Will Haskell, D-Westport, will reach through Darien and New Canaan into Stamford. (Reapportionment Committee)

As an 84-year-old with pulmonary challenges I would like to thank Mr. Haskel for the breath of fresh air and wish him well in his future endeavors.

Will Haskell did a great job. Had my doubts when he was running, but pleasantly surprised. Wish him the very best in law school. He will be a shining star if he returns to politics.