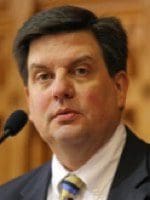 HARTFORD, Conn. – The Senate voted 35-1 on Tuesday to appoint Michael Bzdyra to become the state’s next Department of Motor Vehicles commissioner, despite his admission that he doesn’t hold a master’s degree.

Bzdyra admitted last week that he doesn’t hold a master’s degree in public affairs even though his resume says he does.

He is currently two courses shy of earning the degree he claimed he had received at the University of Connecticut in 1994. He said he is trying to determine whether the credits were properly counted and will go back and earn the credits if it turns out it’s necessary.

Senate Minority Leader Len Fasano, R-North Haven, said Bzdyra “took it on the chin” when the news broke that he didn’t have a master’s degree from the University of Connecticut. “But I talked to Mike over the weekend and he told he he’s going to go back and get that degree.’’

Outrageous. You don’t lie on your resume. It is perfectly easy to show on your resume that you took courses toward a degree without lying and saying you have a degree that you don’t have. I cannot believe 35 out of 36 state senators voted for this candidate.