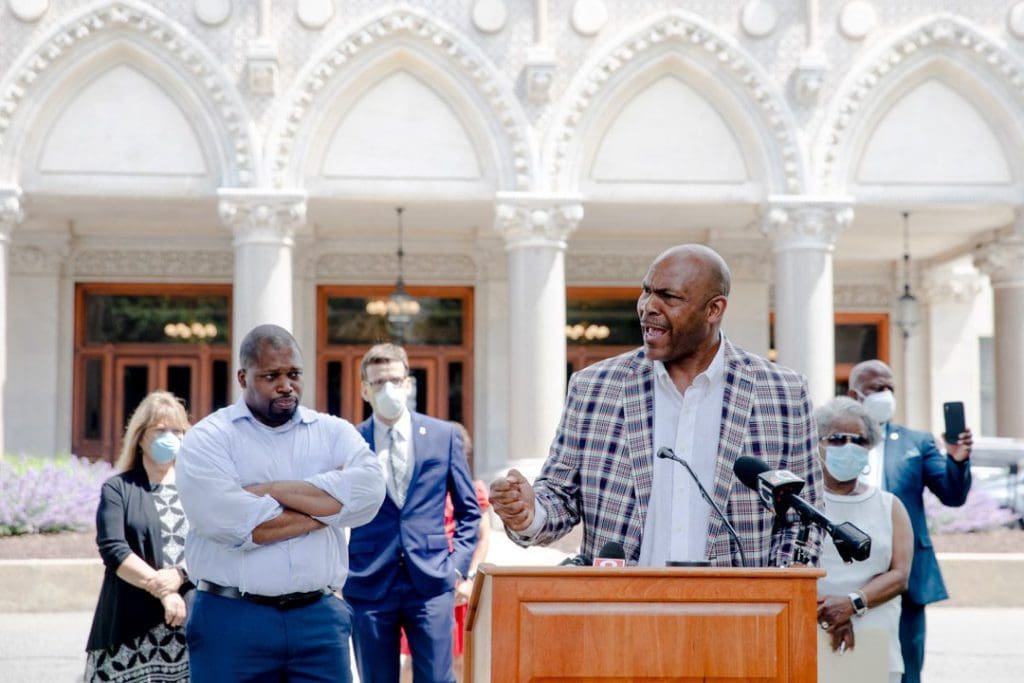 But while they touted this as an agenda for the special legislative session planned for July, they also conceded majority House Democrats and Gov. Ned Lamont haven’t agreed to tackle any reform issues next month except for police accountability.

“This is the time for the state of Connecticut to step up to the plate and be bold for all the residents,” Sen. Douglas McCrory, D-Hartford, said during a late morning press conference on the Capitol lawn. “If we don’t do it now, we will never get it done. If you cannot change the way we’re doing business in Connecticut after you saw what happened the last three weeks, then you’re not a citizen, in my opinion.”

Senate Democrats held their press conference on Juneteenth, a holiday celebrating the liberation of those who had been held as slaves in the United States.

McCrory and others referred frequently to the killing of George Floyd by Minneapolis police three weeks ago, saying Connecticut residents outraged by this action demand immediate, comprehensive steps to combat systemic racial injustice.

“That is what we hear in the streets. That is our battle cry,” said Sen. Marilyn Moore, D-Bridgeport. “They want it now and we must deliver it now.”

But while Democratic senators spoke frequently with optimism about the prospects of broad reform, they were silent — until pressed by reporters — about two huge hurdles: neither the Democratic governor nor the House majority have agreed to tackle reforms outside of police accountability and reforms to the absentee ballot process in the upcoming session.

And some of these proposals have long faced strong political opposition in Connecticut, from Democrats and Republicans alike.

Senate Democrats insist they are now ready, for example, to tackle barriers to the creation of affordable housing, including removing zoning restrictions that allow many affluent suburban and rural communities to prevent this type of housing from being built.

In education, programs would be launched to increase minority teacher recruitment and to allow students from poor communities to attend better-funded, “high-opportunity” school districts.

Disproportionate numbers of black and Latino residents have died during the coronavirus pandemic, and Senate Democrats would expand state-sponsored health care to reverse this trend in the event of another COVID-19 surge.

Regulations would also be tightened on so-called “junk” health insurance policies — temporary options, often for the unemployed, that actually offer little or no protection. 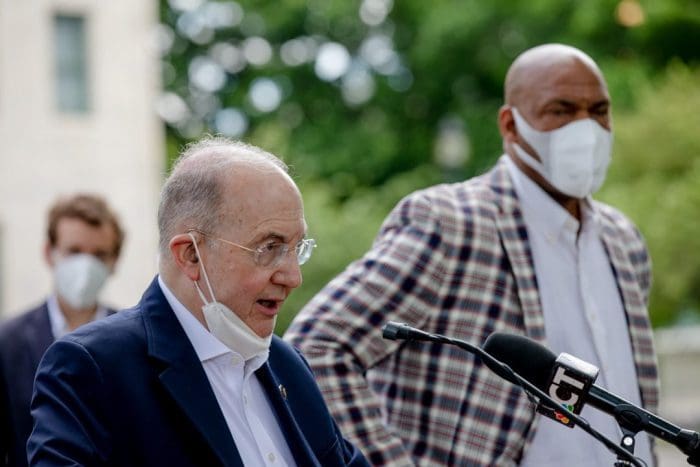 “It is my hope that we ultimately will have agreement from these groups,” Senate President Pro Tem Martin M. Looney, D-New Haven, said when pressed repeatedly whether he had backing from House Democrats and the Lamont administration to now pursue the broader agenda. “You can’t look at these issues in silos.”

But following Friday’s press conference, it appeared the other players in this dynamic were focused on a smaller agenda — at least for July.

“I plan on calling the General Assembly into special session during the month of July to address the issues of police accountability and expanding access to absentee ballots,” Lamont wrote in a statement, who suggested other issues could be tackled during the 2021 regular session, which begins in January. “There’s still more that we need to do in addition to those issues to address the complex and difficult problems of racial and economic inequality. I look forward to working with legislators and other stakeholders on those issues during the next regular session.”

House Majority Leader Matt Ritter, D-Hartford, said his caucus “fully agrees that there are other issues beyond police accountability that we need to address,” and these include exclusionary zoning, insufficient affordable housing and gaps in education and health care access. “We’ve been trying to pass bills to address these for years.”

But Ritter said legislative leaders also committed to the Black and Puerto Rican Caucus to address police accountability this summer.

“We have some deadlines that we’re going to have to meet,” he added. “We need to get those done. I do believe there’s a path to do something, but the clock is ticking.”

“We feel strongly that’s something that needs to be taken up now,” she said. “Let’s focus on what we all agree on.”

Sen. Gary Winfield, a New Haven Democrat and co-chair of the Judiciary committee, said the special session police bill has not yet been written. The proposals unveiled Friday morning were concepts, the product of conversations among legislators. 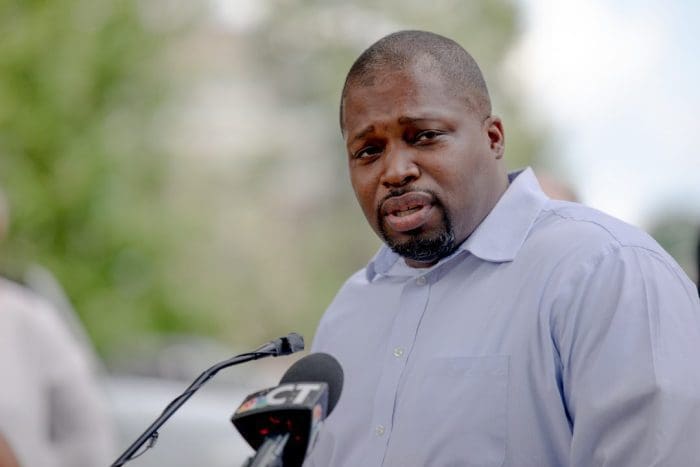 “Maybe this isn’t something that we should say, but I want the furthest reaching bill possible,” Winfield said. “Some people would call it radical. I would just call it what we should have been doing the whole time.”

Senate Democrats would mandate that police officers intervene if their peers are engaging in violence or other forms of misconduct, would require all police to wear body cameras and would ban chokeholds and neck restraints.

Lamont made similar directives in a recent executive order. But Senate Democrats would go further, also appointing an inspector general to lead all investigations into use of force by police and misconduct.

Currently, state’s attorneys are responsible for investigating officers who kill residents, a system that has resulted in just one criminal charge since 2001.

The caucus also would give civilian police review boards more power when reviewing complaints made by the public; as of now, civilian review teams are generally restricted to viewing internal police reports that have already been finished.

Other Senate Democrat proposals include: decertifying officers convicted of misconduct; banning “no-knock warrants,” which allow police to enter a property without knocking; establishing false accusations motivated by race, gender or religion as a specific criminal offense.

A plea to cut the “pious platitudes”

At the same time Senate Democrats were announcing their Juneteenth agenda in Hartford Friday, Lamont was attending a Bloomfield event billed as “A roundtable on Racial Equality and Social Justice” with Lieutenant Gov. Susan Bysiewicz, who told the audience the administration understands the disparities and challenges that people of color face in health care, economic prosperity, and the criminal justice system.

Lamont said he recognizes how important this moment is.

“We’re here because we have an opportunity to make a difference, and that’s why we’re going to do it, and that’s why I’m here to listen,” Lamont said before launching into a 30-second rundown of civil rights triumphs and challenges ranging from the outlaw of slavery to Jim Crow Laws segregating housing and schools. “We’ve had these moments before, and you don’t want to waste them. You want to make sure that we’ve learned and we can do better.

Three state representatives — all of them black, one a retired police officer, another a landlord, and another a teacher – shared their wish lists for improving the lives of their constituents. While many focused on police accountability, many recommendations were made to improve education and housing.

“We do have to come to a point where we can heal, but it really can’t quite happen yet – there’s just too many disparities out there,” said Rep. Bobby Gibson, a Democrat who lives in Bloomfield and teaches at a middle school in town.

Hartford City Council President Maly Rosado said her mostly black and brown constituents are, “tired of a lot of talking, really” and wants to see action soon. “If you have a person who is representing you and is not meeting your needs, speak up, vote. It’s the only way we’re going to move forward as a community.”

That’s when Rev. Cornell Lewis, an activist who lives in Bloomfield and helped organize several protests, interrupted with his megaphone from the back of the meeting after spending the bulk of the meeting holding up a “Black Lives Matter” flag.

“We are tired of pious platitudes and rhetoric that reach up to the sky with nothing substantive. The people in Hartford and Connecticut are angry. You’re lucky that the rallies in Hartford contained the rage of the people,” he said. “I am telling you now we want fundamental change in the way that things are going on in the state in terms of racial inequality. … Cut out the pious platitudes, listen to the people.”

Other speakers said one of the fundamental problems is that their elected officials, police officers, and teachers are overwhelmingly white.

In Connecticut, there is presently one elected black mayor or first selectman — in Bloomfield — and not any Latino town chiefs, according to Bysiewicz. That leaves the movement dependent on their white allies with power to make changes, speaker after speaker said.

Lamont wrapped up the 90-minute roundtable saying, “As a white guy with a little bit of power, I think I’ve got a lot of listening I have to do, and I learned a lot,” he said. “First of all, you can lead, but you need people to follow. You’ve got to change hearts”

Asked by a reporter if legislation will be coming from his desk, Lamont said, “No. It’s a bill that is going to come with working with the legislature.”

Isn’t the real, root cause of systemic racism the systematic destruction of the black family in economically distressed areas? This has resulted in literally every area of concern noted above, those are the symptoms of our fail welfare state policy.

The destruction of the black family is the undeniable root cause of systemic poverty, high crime rates, sub-par schools that don’t prepare black children for life, lack of political clout, sub standard housing, etc. This has been going on for 5 decades, it happened so slowly we have not noticed. The result is the repression of 4 generations of a proud black people.

We are all guilty of allowing this – white, black, brown, yellow, red. We are all complicit. We have all allowed our freckles leaders to kick this can down the road far to long, so long in fact that we are not even aware of this root cause any longer. Shame on us all. Is is any wonder the rage?

Where is the main stream media on this? Where are the conservatives/republicans to push back? Why has the left allowed decades of social destruction?

We all stood by and watched.

If you want to really attack systemic racism change the soul crippling policies of our flawed welfare system. Don’t settle for our feckless leaders on both sides of the aisle as they offer up police department all over the country.

Throwing the police under the bus to appease the mob is a failure of leadership. Tackling systemic racism is courageous leadership.

It all starts with education. Anyone with any common sense knows education is empowerment. Let’s integrate the New Canaan, Wilton, Westport, Darien public schools to enable kids from Norwalk to have an even playing field.
As long as we’re stripping the scab off the conversation about race we all need to also admit there”s fault on both sides. This is not a one way street. The Black movement need to be introspective as well. I haven’t seen that yet, but maybe I’ve missed something.

@Curious is spot on! I’m afraid that all the “fixing” of past wrongs will still far woefully short. The crushing of the black nuclear family is a huge part of this problem. It’s the elephant in the room and isn’t acknowledged by leaders

@john O’Neil. The experiment you are advocating has already happened through school desegregation and busing. The results are in and it failed. Why would busing south Norwalk kids an additional hour a day to reach New Canaan instead of Silvermine make a difference? Data shows that white kids in Norwalk perform at par with neighboring towns, that statistic should make you rethink your argument.

The article below offers a lot of meaningful changes cities should have the courage to pursue, many echo the sentiments commenters above wrote about. However, are we finally willing to truly reform the system and confront decades of failed policies?