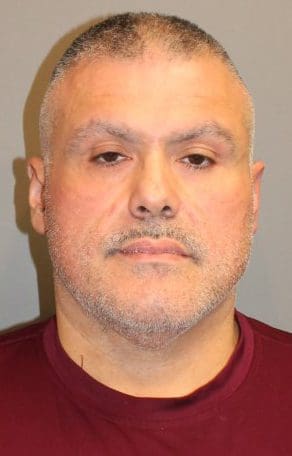 On September 8, 2017 at 11:03 pm, Norwalk Police responded to the Bow Tie Cinemas at 542 Westport Avenue for a male who had negligently shot himself in the leg. Arriving officers located Theo Thomopoulos inside the lobby suffering from a single gunshot wound to the leg. Officers seized a 9mm handgun from Thomopoulos, who was transported to the Norwalk Hospital for treatment. No one else was injured during the incident. An arrest warrant was subsequently issued for Thomopoulos, who turned himself in at police headquarters on October 5, 2017.

Charges: Unlawful Discharge of a Firearm, Reckless Endangerment 2 and Breach of Peace 2

Anonymous Internet tips can be sent to Norwalk Police website at: www.norwalkpd.com

This press release was posted as a public service. A press release is a written announcement submitted to news organizations to publicize an event or activity, a milestone or a point of view. NancyOnNorwalk has not researched the assertions made and takes no responsibility for the content.

The charges are pretty clear -so what was the hold up? Or rather the nexus to arrest him – knee jerk reaction to the Vegas Tragedy? It certainly looks that way.

If you want to shoot yourself in the foot, Norwalk’s the place to do it.

No bump stock here, Murphy is too busy soliciting election funds to bother himself with Bridgeport probably not even a voter.

but then again the guy was only shot 10 times no reason for any of our DC trash to get involved,

Whats interesting is Bridgeport talks about their gang squad, wonder in Norwalk has one?

Maybe Himes will outlaw glasses if they figure out the shooter was near sighted.

On November 28th 2008, the NY Giants wide receiver Plaxico Burress shot himself in the leg accidentally at club LQ in NYC. He turned himself in 2 days later to face criminal charges. He ended up spending 20 months in jail – NYC laws. He likely spent close to a million dollars on attorney’s fees to get a reduced sentence.

Norwalk PD – why did it take a month? Also, anyone want to lay a few drachma he doesn’t spend a day in any CT jail?

Why no arrest here and why the cover up of the names of the cops involved?

@Donald. Shooting range is the appropriate place to discharge a weapon. A movie theater is for watching movies. Just want to clarify since it isn’t clear for you. In your world drivers would be ticketed for speeding on a race track.

@Patrick Cooper, Plaxico Burress was carrying a concealed weapon in NYC without a permit, which is illegal in nyc as there is no open carry law. He was charged with criminal possession of a handgun. Bloomberg also pushed for the fullest possible prosecution. So yeah, different laws. Thomopoulos was charged with unlawful discharge but not criminal possession of a firearm.

I’d love to know what you implied with your drachma comment by the way.

Mitch Adis
Please tell me you are kidding.
The shooting range is the correct place to discharge a gun when facing towards the target. It is not the correct place when discharging the gun to where the people standing. Just want to clarify since it isn’t clear for you. If we were to use your logic or should I say lack of, then In your world it would be ok to kill someone as long as it was at the shooting range.
Tell us are you a current or retired cop as no one else would attempt to justify this crime involving the police.

So were you there to know such details or are you fabricating a scenario?

@Donna – glad you got my point (a little) – it’s the same act but a completely different outcome because of our state laws. I was trying to highlight that – that’s all.

Look, I read your numerous posts here daily – and they are typically lucid, informed, and thoughtful. So I’m curious why you would make light (“shoot yourself in the foot”) of this incident? This man owes the remaining days of his life to “luck”. If his firearm was positioned just slightly different in his pocket, the bullet might have found a child. I accept that by law, people have rights to have and carry weapons. But I have zero personal context to understand why anyone needs a loaded 9mm (with the safety off) in a Norwalk movie theater. Explain that to me, please.

As for the drachma – the “bet” would be worthless – just like the currency. I have Austrian Schillings, French Franc’s, and some leftover Chinese Renminbi if you’d prefer.

Mitch
Actually the one that is wrong is you. A quick Google search will so hundreds of arrests for people accidentally discharging a gun at the range. I along with many others in Norwalk would like to know why no action was taken by the NPD and why the cover up?

@Patrick, if you’re suggesting CT needs more robust concealed carry laws, I’m with you. But the man was arrested under the laws we have, not the ones we want. If he had shot a child, I would not be making light. But I reserve the right to find humor in this incident. We can’t alter our sentiments to make them socially acceptable for the “what if” moments. Or maybe you can, but I won’t.

Mitch Adis
So you continue to say its ok for someone to shoot another as long as it at a gun range… {…}
This comment has been edited to remove an insult, which is against the comments policy.