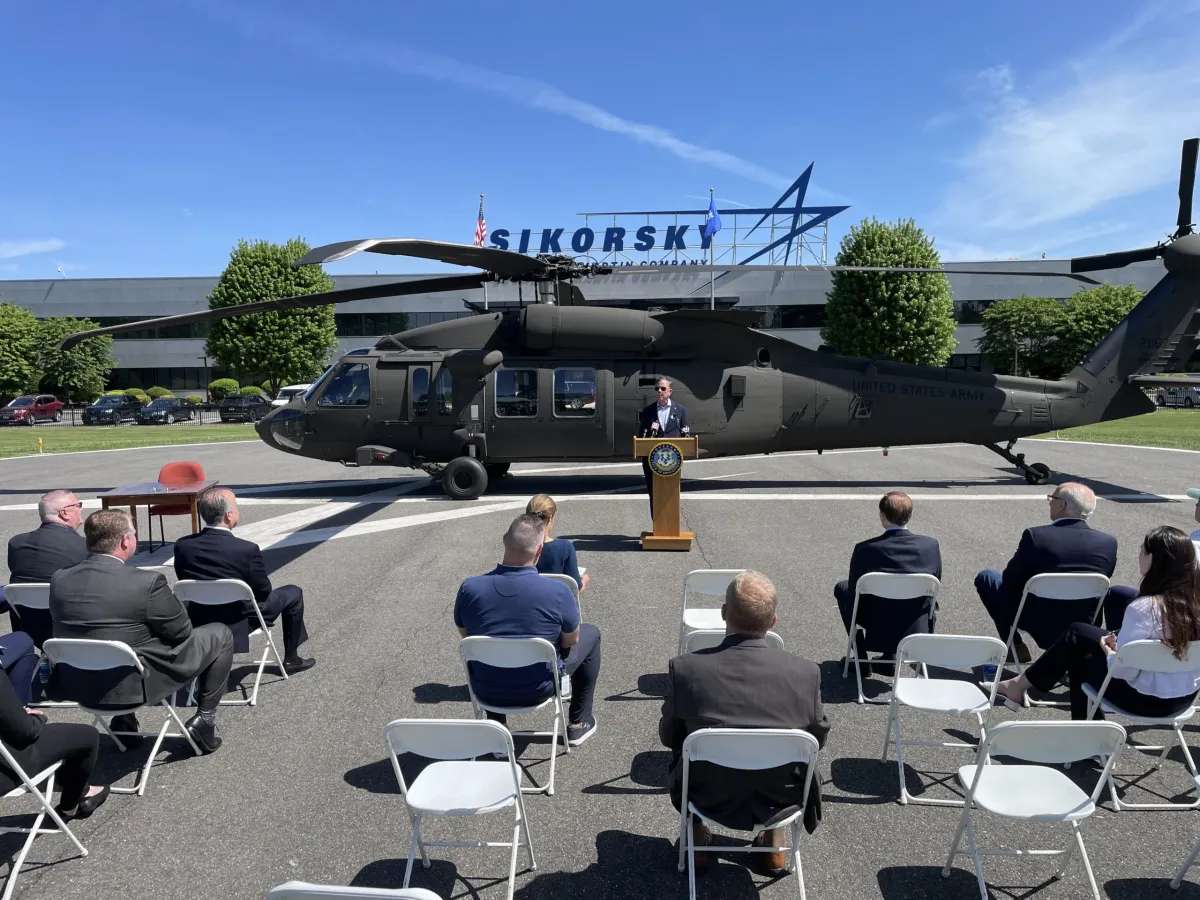 Gov. Ned Lamont speaks at Lockheed-Martin’s Sikorsky in May 2022, where he signed a tax incentive agreement between the company and the state. (Erica Phillips, CTMirror.org)

Connecticut-based Sikorsky announced Wednesday that it filed a formal protest of the Army’s decision to choose another company to build a long-range assault aircraft that is envisioned as a successor to the Black Hawk helicopter.

Earlier this month, the Army selected Texas-based Textron Inc.’s Bell over Lockheed Martin’s Sikorsky to produce an eventual replacement to the Black Hawk. The contract is worth $1.3 billion to start and up to $7.1 billion for an initial round of production with likely billions of dollars more down the road.

Sikorsky president Paul Lemmo said his team received a full debriefing from the Army after the decision was made and followed up with additional questions. But Lemmo said the company chose to pursue a challenge to the awarded contract because it believed the “evaluation criteria were not followed.”

Most protests to contracts are filed with the U.S. Government Accountability Office (GAO), a watchdog agency for Congress. GAO reviews the appeal and can recommend whether to sustain, deny or dismiss the protest.

“That decision was not made lightly,” Lemmo told reporters on Wednesday afternoon. “Still after all that information, it was evident to us that a protest was warranted. The data and the discussions lead us to believe that the proposals were not evaluated to deliver the best value to the army, our soldiers, or the American taxpayers.”

“We remain convinced that based on the selection criteria the Army laid out that Defiant X is the transformational aircraft that ensures the Army’s readiness…and deters rapidly advancing threats,” he added.

The Army’s selection of Bell left businesses and lawmakers in Connecticut and Washington shocked and in search of answers. Sikorsky, which employs about 8,000 people between its Stratford headquarters and other campuses, has been producing the Black Hawk since the 1970s.

The loss of the contract would have ramifications for the hundreds of suppliers to Sikorsky and the thousands of people who work for those smaller businesses. More than 200 businesses provide various services, materials and products to the Lockheed Martin company.

But Lemmo said that regardless of the protest’s outcome, suppliers to Sikorsky who currently work with the company and planned to do so on the production of the new model will still have work related to the Black Hawk.

“We are going to maintain those suppliers as we continue to build Black Hawk and we’ll see the outcome of this protest as it relates to FLRAA,” Lemmo told reporters.

Bell was Sikorsky’s only competition in vying to produce the Black Hawk’s successor through the Future Long Range Assault Aircraft (FLRAA) contract. The FLRAA program, which began in 2019, is part of the Army’s Future Vertical Lift initiative, which aims to replace some of the assault and utility helicopters in its fleet.

Sikorsky entered the FLRAA contract competition with the Defiant-X in partnership with Boeing. Lemmo said the new model met the requirements when it comes to speed and range as well as noting its “maneuverability and survivability.”

Lemmo also argued that the Defiant-X would be cost effective because it uses similar infrastructure to the current Black Hawk helicopter. He said that Bell’s model – the tilt rotor V-280 Valor – has a larger wingspan and would likely need some new infrastructure for the Army to be operational.

Once the Army made its announcement on Dec. 5, both Sikorsky and Bell received debriefings about the selection. An Army spokesman said the debriefs were completed by Dec. 14. The Army did not immediately respond to an inquiry about Sikorsky’s decision to file a bid protest.

Now there is a challenge to the FLRAA contract, the GAO has up to 100 days to make its non-binding decision, though these cases can get resolved much earlier.

If the GAO sustains the protesters’ arguments, it will recommend that the agency involved – in this case the Army – address the violation. The Army can then decide whether to go along with the recommendation.

It is not uncommon for defense contractors to pursue protests, and companies have at times been successful in overturning initial decisions. Sikorsky has previously won and lost appeals over the years, though Lemmo noted that Lockheed Martin does not often pursue challenges to contract awards. Lockheed Martin acquired Sikorsky in 2015.

Following Sikorsky’s announcement, Gov. Ned Lamont said he spoke with Lemmo and gave his full support for a review of the Army’s decision on the FLRAA program.

“I spoke this afternoon with Sikorsky President Paul Lemmo and I fully support the company’s decision to request an independent review regarding how the decision to award this contract was conducted,” Lamont said in a statement. “I remain confident that Sikorsky is the best and most capable company to deliver this next generation aircraft to the U.S. Army and that Connecticut’s exceptionally skilled workforce is the best trained in the country to manufacture this aircraft.”

Connecticut’s congressional delegation has tried to get more information about how the Army made its determination but there have been legal barriers to them obtaining further details with the process still open and the possibility of appeals, especially before Bell and Sikorsky had received their debriefings.

About a week after the decision was announced, Sen. Chris Murphy, D-Conn., and Rep. Rosa DeLauro, D-3rd District, said they spoke with Army leadership and pressed the department to make sure there was a fair process. DeLauro is the outgoing chairwoman of the House Appropriations Committee whose district includes Sikorsky’s headquarters in Stratford.

“We are always in the business of making sure that Sikorsky is healthy and continuing to hire,” Murphy said in an interview earlier this month, prior to Sikorsky’s decision to protest. “There is no shortage of helicopter work to keep Sikorsky going, notwithstanding whether or not they ultimately win this award.”

“Sikorsky, Pratt & Whitney, and Electric Boat regularly lose contracts and they regularly win contracts, so this is part of the life cycle of being a defense contractor,” Murphy added. “No doubt this is a big contract, but there are other big contracts coming down the pike.”

The Black Hawk will continue to be in production for several years.

When submitting the bid, Lemmo said the companies were asked for a quote of less than 1,000 aircraft, adding that the Army did not set a “buy objective.” The current number of Black Hawks in the Army’s fleet is 2,150.

The company will also keep building Black Hawks through 2027 for a different Army contract.

The Lockheed Martin-owned company is also seeking the Army’s FARA [future attack reconnaissance aircraft] contract with its Raider X prototype, which will likely be decided in a few years.

Plus, Sikorsky – as well as other Connecticut defense manufacturers like Electric Boat and Pratt & Whitney – are getting a major boost from the federal government. The recently passed annual defense bill authorized funding to increase production of three of Sikorsky’s aircraft: UH-60 Black Hawks, CH-53K heavy lift helicopters and combat rescue helicopters.

“This decision, whichever way it ends up going even after the protest, certainly will not define the future of Sikorsky,” Lemmo said.

Even the Pentagon, who’s budget comes from printing presses, realizes that they can get more bang for their buck from a Texas supplier. Don’t worry LMI (who bought Sikorski) will get their money elsewhere in the lower cost states where they supply the war machine.

Looks like people would rather do business with a red Republican state than the old Yankee blue🥵👎🏽🙈🦔 this trend is been going on for more than 10 years, when I visited Austin so Connecticut better wake up😩

Military industrial complex is the biggest problem our government can’t stand up to. Embarrassing to see how obvious the cash grabbing has become and the role politicians play.

@Babar nailed it. Notice the Ukranian money doesn’t even count on the DoD budget which is closing in on $900BN. The war machine is profitable, but always looking for more profits.

As seems to be the tradition, commentators come out to complain about a topic they know nothing about. The Army does not shop for a VTOL aircraft to find ‘bank for buck’ as if they were shopping for the weekly ground beef deal at S&S. The Bell solution was considerably better than what Sikorsky designed, and everyone knew it. More range, more lift, more speed. End of story. The gov’t. had already done Sikorsky a favor in steering the Presidential White Top business their way, so this was a straight up fight that Sikorsky lost. But the Pentagon wants Sikorsky to survive well into the future, so…

As far as the topic of Pentagon (black hole) budgets… all this required is political will, but currently it seems only “communists” and “socialists” want to see that budget controlled. /s.

@Peter. Sikorski could not compete. That has everything to do with budgets. Could Bell have made a better product in CT? Doubtful with our current war on business here.