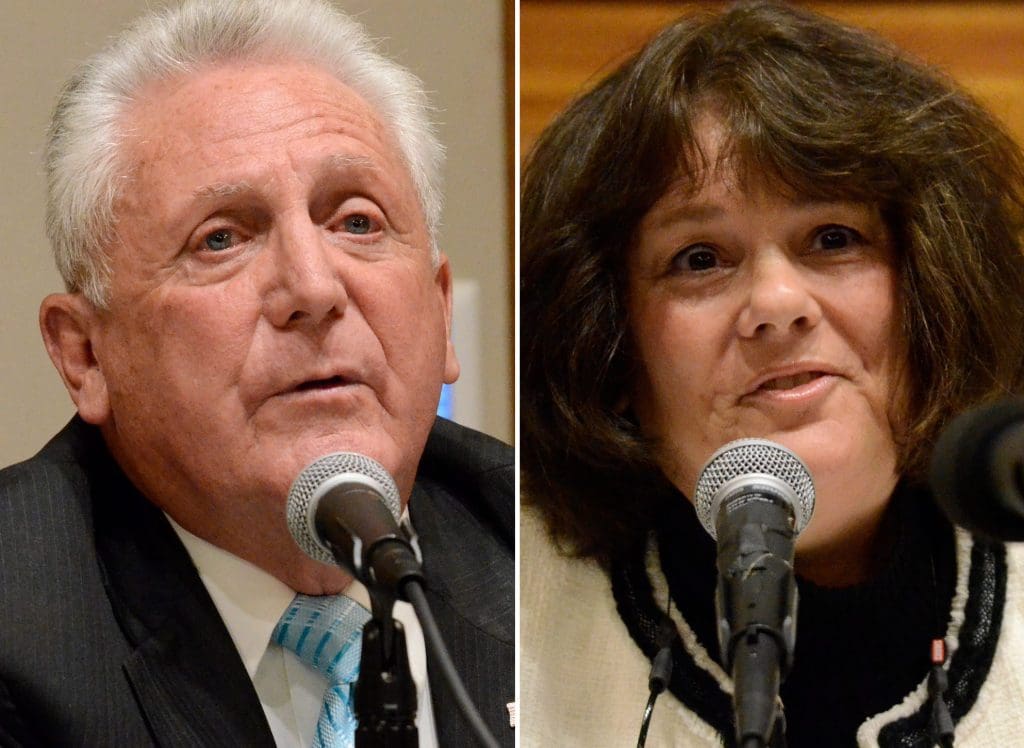 “I look forward to working with Lisa to amplify Norwalk’s voice and advocate as Norwalkers regardless of party affiliation… I believe Lisa understands the climate of what is happening here in Norwalk and I’m positive she would be a woman of her word and will champion everyone in our great city!” Simms is quoted as saying.

“Lisa has a long history of advocacy on behalf of South Norwalk,” Dumas is quoted as saying. “She understands the importance of education and job training for our young people. She is also committed to helping long-time South Norwalk residents stay in their neighborhood and improve their quality of life.”

Simms is a former Council member. In that role, he frequently expressed distrust and anger toward Rilling, former Norwalk Police chief. Dumas was appointed to the Council to fill a vacancy in the last term and is running unopposed for reelection.

“I have known Travis Simms and Ernie Dumas for many years, and they care deeply about Norwalk,” Brinton is quoted as saying. “I am humbled by their courage to look beyond party line and recognize who will serve all Norwalkers better. This is what my campaign has been about, Norwalkers uniting for a better future for our community.”

Rilling released a statement in response to the Simms-Dumas endorsement:

“Although I am blessed to receive this broad support, the most important endorsement comes from the voters on election day. I ask you, the residents of Norwalk for your support again – I hope you will believe in our city and believe in our progress under my leadership.”

Thank you SIMMS and DUMAS as we all know retaliation in Norwalk is real, faceless, nameless folk that undermine those that do not fit in the ‘boys club’ or are ‘friends of dems’. You both are proven to be looking out for NORWALK and its best interests.

It’s time that politicians look past party affiliation, political rhetoric and photo opp’s to show their alliance to our community.

Over the past six years, while serving on the Common Council under the last two Mayors, I’ve experienced the most dysfunctional and divisive administrations in our history.

The Black community specifically in South Norwalk has purposely been marginalized, disenfranchised and ignored.

look around South Norwalk. There no more social service programs for the people in our community who need it the most.

There are no after school programs, recreational places or outlets for our children to go to just to be children.

Just look at the streets and sidewalks on Woodward Ave. Which have been on the Spring schedule every year to be paved over the last 2 decades.

It seems that black community can’t have anything for itself, unless it’s ran by someone else, who is not black.

Our community has a lack of programs, services,
Infrastructure repairs and our district buildings; which, have always have been a safe haven for many of our children and residents have been farmed out to organizations that doesn’t equally serve the the people I represent and our residential properties have been sold to developers whose only interest in building 1 and 2 bedrooms units that are unaffordable and drives property taxes out the roof and that’s why we need a mayor that will support rent control in the urban communities.

It’s time that we as the people, say we had enough of the promises and lies.

It doesn’t take 6 years to have positive change on the most vulnerable in our city.

It’s time that we go in a different direction and choose a Mayor that’s not political in nature but have the optimism, enthusiasm and vision to inject real leadership for all of Norwalk and not just the few.

So, next Tuesday, November 5th, I’m asking voters of Norwalk to come out and make this an historical turn out and vote for an unaffiliated women who gets it… Lisa for Norwalk!!!”

Just look at the streets and sidewalks on Woodward Ave. That have not been paved in over 2 decades.

I believe what Lisa says. Her track record and the way that she speaks indicates that this sharp lady is up for the job. There have been so many questionable issues with Mayor Rilling over his tenure. The need for a brand new mayor, especially a lady, is overdue. Let’s get behind Lisa and give her a chance to apply her management skills to running Norwalk. Time for a woman’s touch!

Having sat through many Coalition of Neighborhood Associations (CNNA) meetings for years listening to Mr. Dumas describe the poor living conditions residents in some parts of SONO suffer through and then recently hearing the mayor in his 3 term and his staff pad themselves on the back for holding listening sessions about SONO, I can only imagine the frustrations he must feel…

The mayor is out of touch and apparently so are his endorsers. I find Rep Himes’s video insulting… “the kind of developments WE want… historically low taxes”… sigh…

Party over principle is how we got ourselves into the mess we’re in. Thank you, Mr. Simms and Mr. Dumas, for showing the vision, wisdom and dedication to our city’s residents with your endorsements of Lisa Brinton.

Doing what’s good for Norwalk!!! This is what this election is about! And this is why Lisa is getting endorsements from well known Democrats! They see the new path we must take and Lisa is the one to guide us through it! She WILL BE Norwalks Next Mayor!! VOTE LISA ON TUESDAY!!!

@Travis: One other thing to work on : Norwalk needs Hartford help with ELL funding. The lack of help has to be hurting Norwalk programs you are supporting. ELL program students have cost Norwalk over $200 Million over last 10 years with ZERO coming from Hartford. Hence, Norwalk has had to reallocate resources to accommodate this influx. I’m certain African American children have been negatively effected by this. YET, Norwalk leadership including Bob Duff and Harry Rilling have brought in ZERO dollars. The least they can do is “shame” those who are holding back support..I find it shocking that this has goes on for years without being dealt with. I like Harry, but he needs to get to work. Someone needs to get to work..Please let us know your position on this critical issue..