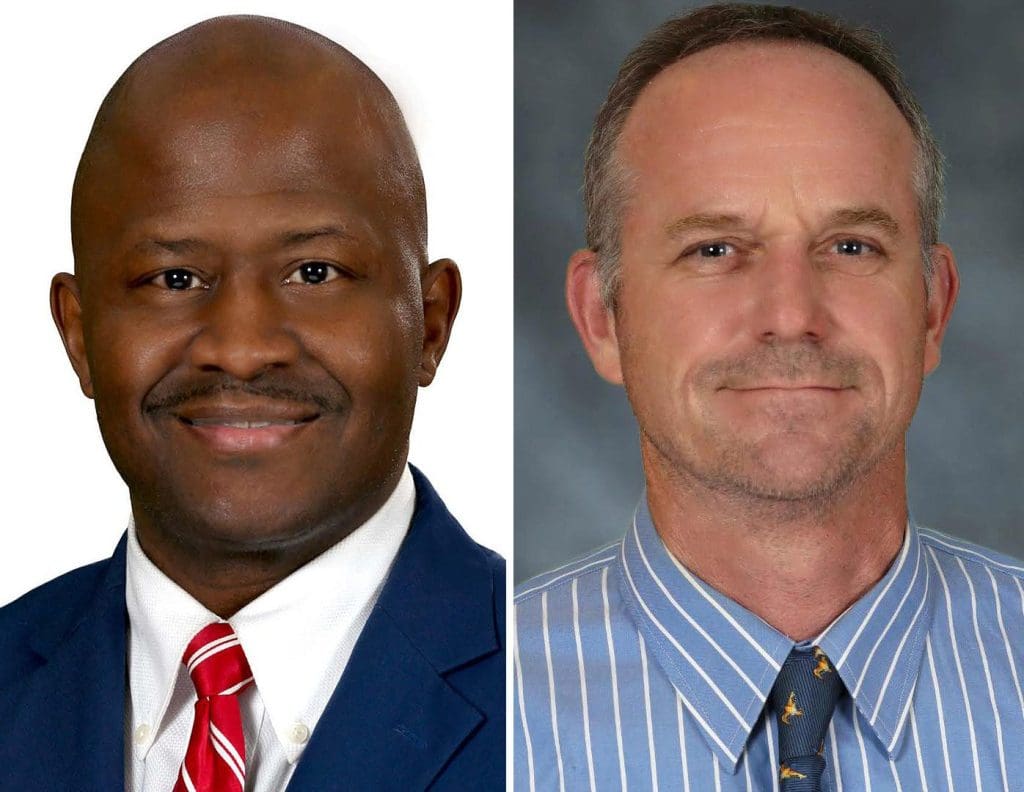 NORWALK, Conn. — The League of Women Voters of Norwalk invited all candidates for State Senate and State Representative in Norwalk’s districts to submit responses to a six-item questionnaire, a photo, and a campaign URL. Here are the answers from State Rep. Travis Simms (D-140) and his Republican challenger, John Flynn.

“My desire to run for re-election for State Representative for the 140th District is conditioned on being part of a broad solution to the issues we face in Norwalk and throughout the state. I want to continue serving and fighting for the taxpayers in the city, and I know the solutions cannot be achieved in one term. Being a lifelong resident of Norwalk, I have strong ties to the community I represent and have always served honestly and with integrity. I’ve served on the Democratic Town Committee representing District B for the past 15 years. Prior to becoming a State Rep, I served on the Norwalk Common Council for nearly 10 years and in the House of Representatives I currently serve on the Appropriations Committee, Environment Committee, and as Vice Chair on the Transportation Committee.”

“My MBA in finance/and BS degree in Business from Villanova will be used to recognize and solve problems. I have held 20 Securities licenses, am trained in insurance/variable and derivative products. I was a biotechnology analyst (Vaccines), own my own NASDAQ Member Firm, Greenwich Global LP, purchased in 1997. I was a portfolio manager in 1990’s, and a position trader/market-maker and partner for a premier Convertible Bond hedge fund and trained others in risk/reward). I am a contractor, carpenter, electrician, plumber, trained engineer and arbitrator. I have a legal background in Pro-se litigation (350 cases), an accounting background with experience in police misconduct cases (11-5013600), money-laundering cases (14-5014345), financial crimes, home-invasion cases (10-5013544-s) and white-collar crime. I am a practicing Catholic, father, and caregiver. I would use my life-experience to assist the community, like no other. 149.”

“The tragic deaths of Eric Garner, George Floyd, Breonna Taylor and countless others have highlighted the serious issues of racial injustice and police brutality. Now more than ever, it’s important that we recognize what’s going on in our communities and do something about it. Police brutality is a federal, state and local issue, and as lawmakers it’s critical that we put forth legislation to combat these issues, ensure human and constitutional rights are upheld, and to hold abusers accountable. H.B.6004 addresses these issues, and provides police officers with the training and support they need to better protect citizens in the communities they serve.”

“As written, I oppose. Malloy Judges refuse to allow evidence into the record protecting the Municipalities and their own re-appointments. In the pending Police Case (20-Fst cv 5023122); 21 Police Officers are being named. I claim the body cams were falsified 4 hours after the TASER. In a related case, the Defendant in (CV 14-5014296) on Jud.ct.gov, was Governor Dannel Malloy, who appointed the Judge that heard the RICO case and denied us a Jury (Conflict of interest). 300,000 felonies occurred. The Accountability Bill gives more power to these Judges, who already have absolute immunity, its racketeering. The bill gives the State’s Attorney more power. Our Chief State’s Attorney, Richard Colangelo, is currently under investigation for bribery and falsifying an autopsy. This bill strips needed protection when discretion is needed.

“I propose revamping the Claims Commissioner to handle Misconduct, making it public. 99% of these cases are currently dismissed by”

“Affordable housing is a top priority for me. On the state level we will need to do more work with the federal government to fully address the issue.

“Housing is the largest problem. Norwalk’s Washington Village was a nightmare. 30 Tenants were poisoned with rat spray, human fecal matter, a year-long gas leak, mold, PCBs and VOCs. The Vesta Corporation recently sued the Norwalk Housing Authority; both accused the other of every conceivable unscrupulous activity (paragraph 17). A private settlement cost the City $1.2 million. Police are not trained to handle mental illness, so the drug dealers fight with the elderly to keep their limited # of apartments. Currently there is a bed bug infestation at Cedar Court. And the City has its hands lied due to the Vesta settlement agreement. The owner of Cedar Court, Arthur has claimed in the past to have bought Politicians and Judges. Congresswoman Rosa De Lauro is now worth 38 million. Colonial Village, Harbor View and Rodner Court have other unaddressed problems like handguns, Candice Greenberg, BPW and FOI.”

“While I feel the state should have more oversight over municipalities for consistency, I also understand the need for local autonomy to ensure inclusivity and equality for all.”

“Districts within a City like Norwalk are different. The 140 has stone crushing, surrounded by residents with Asthma, COPD, in a cancer cluster, during a respiratory pandemic. All the Covid death and all crime is in the 140. Rowayton gets leaf pick up 50 times per year, my street, once. Discrimination, yes?   The 3.7 million Residents have over 1.2 million disabled or elderly. Cities like Bridgeport have substantially greater basic unmet needs and more “undocumented”. Look at $55 million in bonuses to Eversource from Bob Duff?   We have been lied to about Manresa. 600 municipalities and clubs dump contaminated dredging material off Norwalk’s Oyster beds. We have 80 contaminated brown fields and many leaking superfund clean-up sites. The Statewide mandate for Milestone is ludicrous. Local autonomy would assist Norwalk in turning Manresa into a viable transmission station to broker electricity to and from Long Island saving millions.”

“I will be in support of amending our State Constitution to allow early voting/no excuse absentee voting. This will allow every voice to be heard.”

“We need to Vote in person primarily and provide ID with masks and distance one another, the normal exclusions should apply. I recently mailed 100 letters from the Voter rolls of Greenwich; 30 came back undeliverable. The voter fraud in Milford and other places is disturbing. Our Chief of Police Kulhawik, is an Ethics Commissioner of Milford, which had a case of voter fraud. As a resident of Milford, of course, two ladies falsified absentee ballots for $400 each and he found no wrongdoing. I have 13 unanswered ethics complaints filed in 2018 and 2019 with the City Norwalk.

“My top priorities will remain the same. I will continue to educate myself and the public on the importance of following state health guidelines. As the state continues to reset, I will continue to address issues we face with our new school system, rent stabilization for citizens and small businesses, and unemployment.”

“Return to school. Testing is essential, getting back to work is vital. The Covid testing is patented, so is the Virus itself, so it is man-made. This problem was pre-ordained. A friend, Joe Stacey worked for Emerson in Danbury (Branson Ultrasonics). They had a Chinese plant, which was closed; the employees were sent back to CT. Three were infected. Joe caught the virus; 8 weeks in a coma, organ failure and died at age 55. What did CT do?  Congressman Himes gave Emerson a 10 million $PPP forgivable loan to fire all the CT employees and outsource the labor to Massachusetts and New Jersey. Forgivable Federal tax money used illegally like Vanderbilt, Planned Parenthood, and other unconscionable acts.

“A first priority is to have HIPAA changed because the hospital refused all informational requests and others in Danbury are now infected because Contact Tracing is seriously flawed.”

You’ve got to be kidding!! They couldn’t find ANYONE other than Mr. Flynn!!! Please for all of our sakes read some of the numerous posts from Mr. Flynn. If after you’ve read them and still want to vote for him, you’re doing a disservice to our community.

Another anonymous comment I must be doing something right.