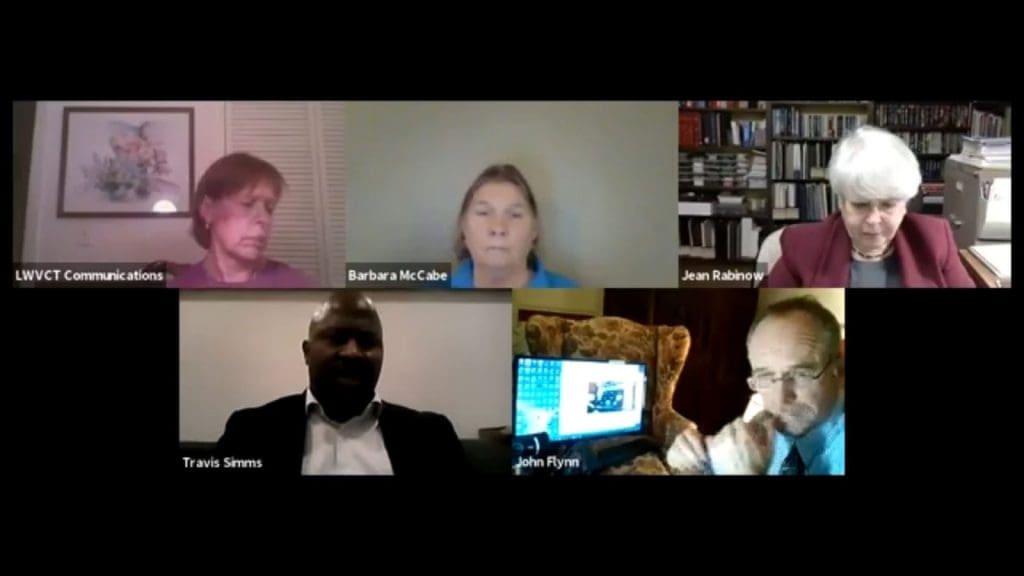 The election is Nov. 3. Many Norwalkers are voting by absentee ballot.

Simms said he deserves a second 2-year term because he and other legislators are “doing phenomenal work… passing many bills that have been sitting on the books for decades.”

Flynn said half the people in the legislature “really haven’t done their homework,” given the policies they endorse.

Simms said he serves on the Appropriations Committee and the Environment Committee, and is vice chair of Transportation. He’s committed to bringing revenue back to Norwalk because “I think been shortchanged over the years.”

Asked what Committees he’d serve on, Flynn said, “I have a legal background and a finance background, and many others.”

Flynn has represented himself in many lawsuits filed against the State, cities and private entities.  He’d like to serve on the Judiciary Committee, he said.

“I think I would do an excellent job interacting with the Claims Commission office, OK, because I’ve sued the Claims Commissioner 30 times,” Flynn said. “It’s never gone to court, not one, everything is dismissed. Nothing is appealed. It’s absolutely ludicrous. What’s going on in the judiciary?”

Asked about the budget, Simms said COVID-19 is a challenge but the State’s rainy day fund is healthy.

“I have faith in the governor, I have faith in my colleagues… I’m not overly concerned that, you know, we’re going to be in a fiscal crisis. But, you know, this is this is certainly something that none of us have seen coming into 2020,” Simms said.

Flynn replied, “When you look at the facts, and how the money spent, I have serious questions about how we’re going to move forward at all.”

Simms and Flynn both said they’re opposed to tolls.

“Connecticut taxpayers are being taxed enough,” Simms said. “And I fought against my colleagues in leadership on this issue. And it’s been hard. But I’m not elected to speak for …myself, I’m elected to make sure that my constituents are being looked after, and that I’m making sound decisions that will impact some of the systems.”

Connecticut needs to look at alternatives, such as sports betting, Simms said.

Flynn charged that the State transportation fund is being raided, and since Simms is Transportation co-chair, “How did he let the money go to something else?”

Asked about COVID-19, Flynn said, “I was a vaccine analyst when I owned a biotechnology research NASDAQ member trading firm. So we’ve tracked 400 biotechs. And half of them fail because of the Securities Exchange Commission.”

“I will support any measures to make sure that the public is safe,” including vaccinations, Simms said.

Moderator Jean Rabinow moved on to the State’s tax system.

It needs a major overhaul, Simms said. Making the top 1 percent pay more will fix the economy and keep the State moving forward.

“The tax issue is at the root of most of the problems,” Flynn said. “…We can’t afford any increases, we should be going the other way.”

Although there’s much talk of qualified immunity in the police accountability bill, “The problem is the absolute immunity of the judge,” Flynn said. “Hello? I sued Malloy for $40 million in 2014. He appointed the judge that heard the case. Hello?”

He continued, “I sued NASDAQ. Okay. The judge, special master, was the NASDAQ attorney. Hello? Go through the list. There are hundreds of thousands of misconduct cases that we don’t even look at. And I can point them out. And we can fix them.”