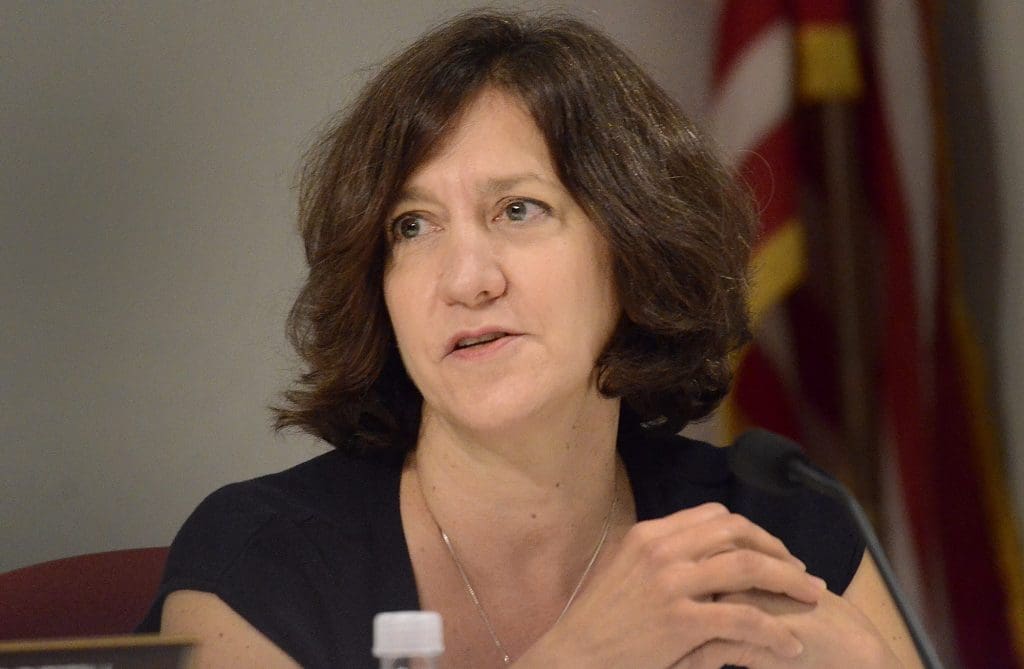 Common Council member Barbara Smyth (D-At Large) was elected as Council President on Tuesday. She is entering her second two-year term on the Council. (File photo)

On Friday, this was revealed as a mistake. “Rev. Phyllis Bolden was selected Council President in 2008. We did not intentionally mean to dismiss Rev. Bolden’s significant work and service to our residents. To Rev. Bolden – we sincerely apologize for our mistake,” Norwalk Communications Manager Joshua Morgan wrote in an email.

So the Council hasn’t been led by a woman in 11 years.

Keegan is the only Republican on the 15-member Council. He has a caucus room to himself.

“Following Mayor Harry Rilling’s reorganization of City government over the last 18 months, which included the creation of a new Community Services Department, two of the Council Committees were renamed this term to better reflect these duties and responsibilities,” the release said. “These changes include renaming the Health, Welfare, & Public Safety Committee to the Health & Public Safety Committee, and renaming the Personnel Committee to the Community Services & Personnel Committee.”

The Council was sworn in for its two-year term, 2019-2021. Council leadership is for one year, with new assignments announced in late 2020.

Smyth received 8,527 votes in the Nov. 5 election, more than anyone else on the underticket and just 255 votes less than Mayor Harry Rilling. At a West Norwalk candidates forum before the election she said she grew up in Western Pennsylvania and settled here to raise a family, sending three children through Norwalk Public Schools. She ran two years ago because she wanted to serve her community and “because I really thought we needed more women’s voices at the table and every level of government.”

“I think the biggest challenge facing Norwalk is balancing responsible growth with the historic nature and culture of our city, while taking care of our neediest citizens,” she said in a pre-election questionnaire. “… We need the right balance of economic and cultural growth while assuring a good quality of life for all of Norwalk’s citizens.”

Let’s congratulate our newly elected chairs of city government and wish them well.

Dr. Kimmel, retired NYC educator, in charge of a $200 million budget guaranteed to grow by 5% this year, before portable classroom construction expenses are factored in. I’m sure the kowtowing to the party bosses will pay off eventually.

Our only Paid member of the BOE who decided to pour drinks while the new BOE had to deal with his last minute politicking to get another two years worth added to the next pension. What’s his name again?

And lastly, and sincerely, the next Superintendent of Schools who will bless us with their guidance and leadership, overlooking the shameless political opportunists who are currently running this city as their reign of ego and self serving power grabs will not last.