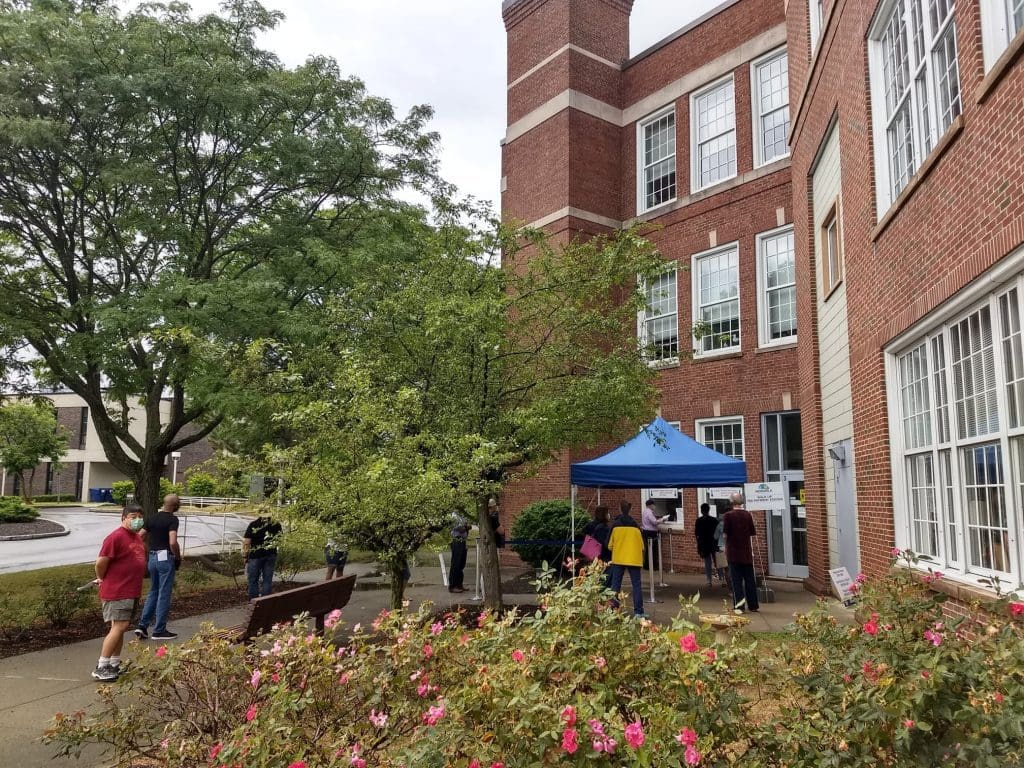 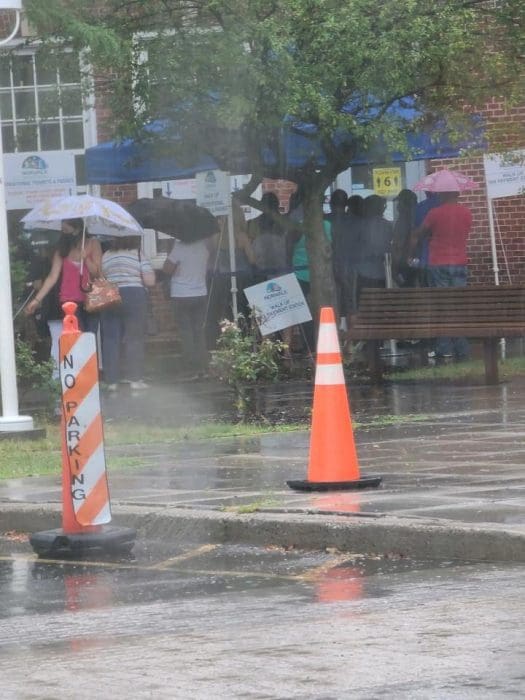 NORWALK, Conn. — The City Hall walk-up window has been getting plenty of use recently, as evidenced in a set of photos submitted to NancyOnNorwalk.

Although taxpayers were granted an extension to Oct. 1, many people are instead heading to City Hall to pay their taxes as soon as possible. Lines have formed, reportedly all day.

“We’ve reminded taxpayers of the grace period due to COVID-19, and the fact they can pay online, by mail, or at multiple banks, but some want to take care of it right away and prefer to use City Hall,” Norwalk Communications Manager Josh Morgan said in a Wednesday email. 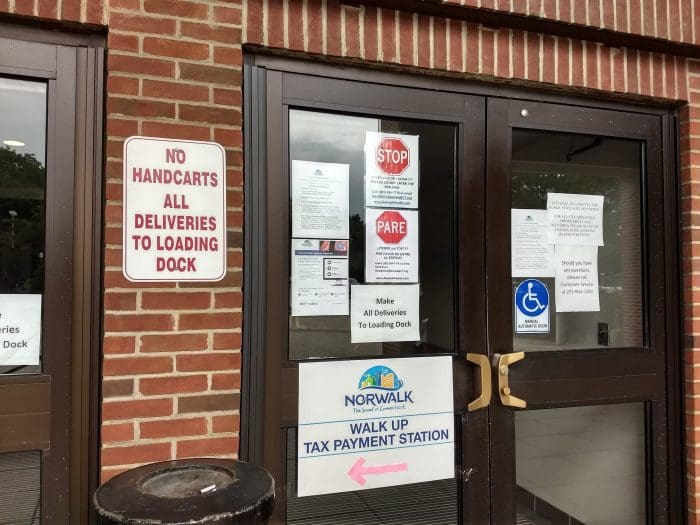 This is in spite of a new online payment service. Tax Collector Lisa Biagiarelli told Common Council members on June 11 that the new vendor would offer a “much more customer friendly experience,” which, “in light of COVID” is “important.” Also, the E-Checks “will be only 95 cents… less than the cost of a cup of coffee,” offering a safe alternative to in-person interactions. 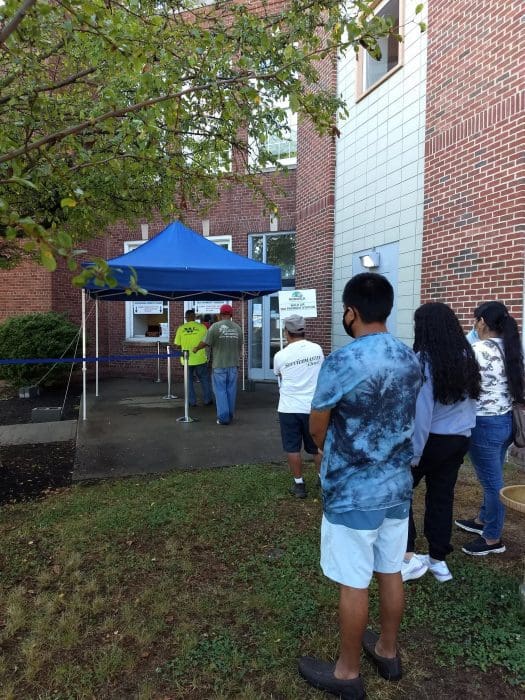 The Tax Office was “really glad” the window was opened, she said. “It’s serving us well because it looked like the building’s kind of closed for a while, but the customers are very happy about it. Our employees are wearing masks, of course … We’re entirely up to date with our work. … We’re collecting money. We’re posting payments. We’re releasing liens. We’re issuing  refunds. We’re communicating with our people, we’re answering the phone. We’re answering mail. We’re doing everything we’re supposed to be doing.”

Some customers like to pay at the bank and thankfully, the banks had agreed to do it, she said. “There’s a demographic in Norwalk that likes to have an in-person transaction. And we don’t want to lose that revenue, we want them to be able to pay the way they want to pay.”

“The rush to pay taxes is nothing new, and something we experience each time tax bills are sent,” Morgan said. “We expect it to slow down within a week or two.” 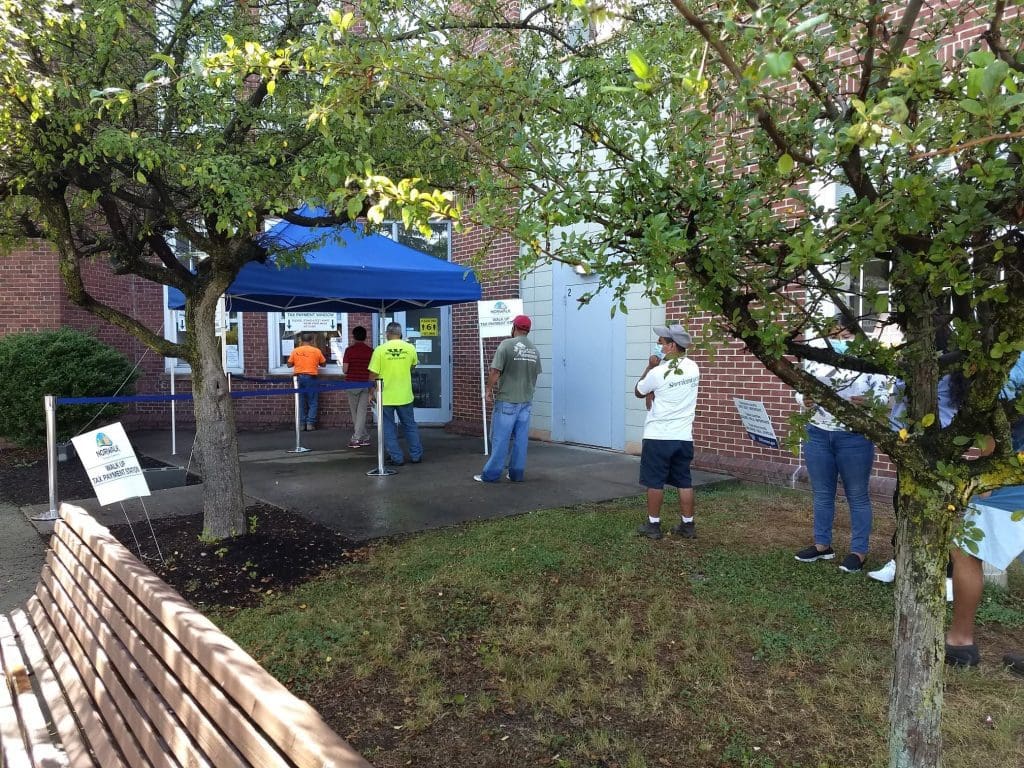 Thank you to all the taxpayers in Norwalk paying their taxes in a timely manner. Although we have an extension to October, it’s good for the City to have money in its coffers to pay for expenses.

Having been to the taxpayer window, it’s not as if employees are very responsive. Good to be a guvment employee. Next visit, the lawn dump.

Never quite understood why people would wait in line when payments can be mailed, made online, or made in local banks (I believe?) They aren’t accepting cash so that can’t be the reason.

How is making people wait outside okay? Why is town hall not opening? Town halls all over the state our safely reopening so taxpayers, attorneys, appraisers, title searchers and other productive working individuals can keep working safely. Our town hall is a huge building. There is ample space for it to open safely with mask being worn, hands being washed and social distancing. It does require management and work to make this happen. Why hasn’t Harry or Laoise King been able to figure this out? Her emails circulating that town hall may not open for 18 months is ludicrous. This is not a vacation and besides the tax collector – the staff needs to be in the building and people need to be allowed in to conduct their business. If people can shop at Home Depot and eat out at restaurants and retail stores can be open – town hall needs to open. It is crazy that the mayor has not opened it. It is leadership by fear! He out protesting at marches but he can’t figure out how to open town hall for business? Instead of smart leadership to provide the community with access within a safe environment. The CDC is very clear. Wear a mask, stand six feet apart, wash your hands and keep the building clean. If the mayor cannot figure this out within his own building how can he be expected to lead businesses to open safely? What happened to me today with town hall should happen to no one! It was appalling that this city has been reduced to this.

Wow. Our town hall might not be open for another eighteen months. Really? Why not?

If not, all those employees better not be getting paid in full.

What’s the deal Mr. Mayor. You got some explaining to do,

The mayor needs to explain this to us and explain it by himself alone in-person on camera. Not with that weird unwatchable Hollywood Squares TV thing he’s been faking us out with for the last 3 months.

Nora-
Agree with you 100%. Its seems all political to me.
I walked by Rowayton School this morning with the dog and saw kids playing at recess. (I’m assuming it was the summer school kids) But Mr. Lib is not allowed to have his camp?
How does that make sense?

And when are the Norwalk libraries opening? Other towns/cities are either partially or fully opened! And the Senior Center? We need our City services. Enough!