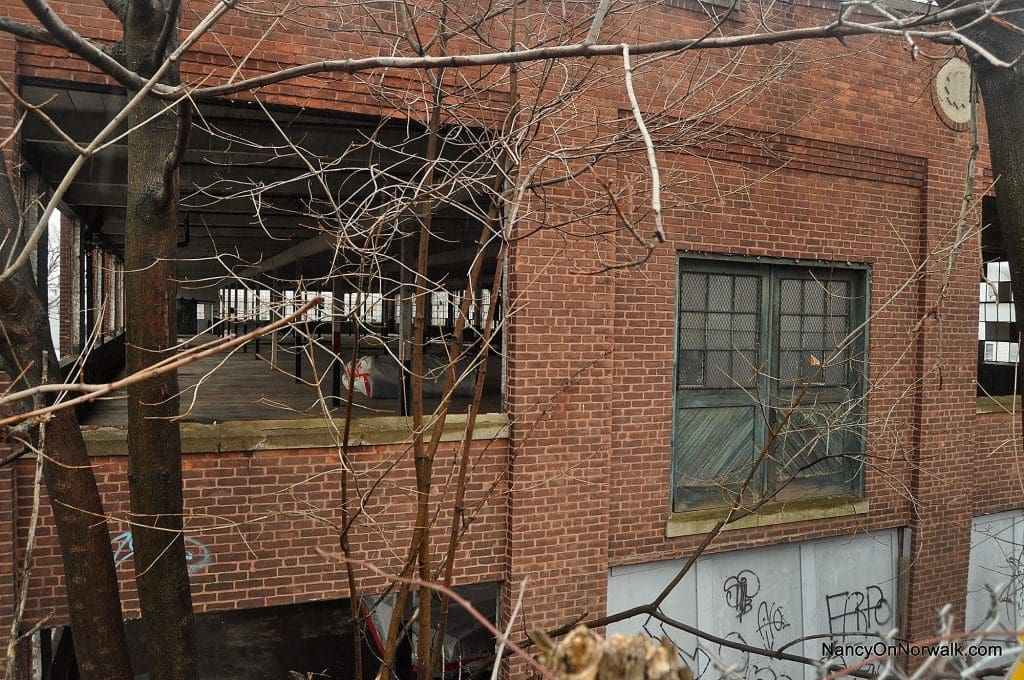 Demolition has begun on the former LeRoy Shirt Company Factory next to the South Norwalk train station. SoNo Metric LLC in 2011 got Zoning approval to turn it into 11,000 square feet of office space on the first floor and 17 residential units on the second floor. 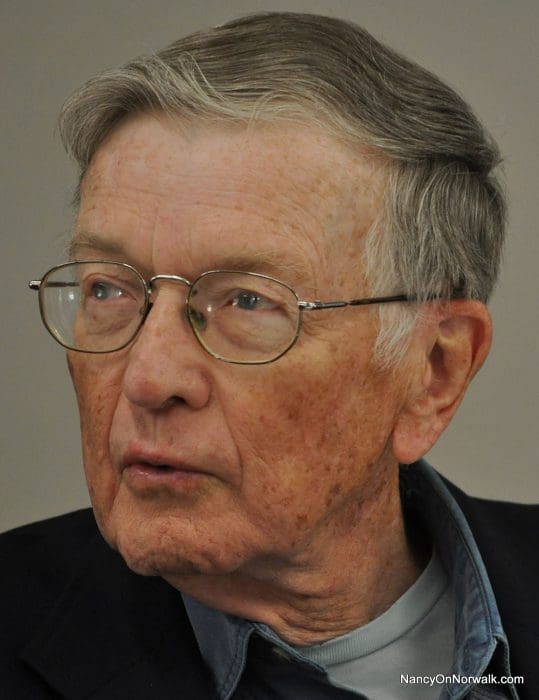 The task force is “not in a period of high activity,” but things are looking up at the Norwalk Parking Authority, said Collins, the task force chairman. The Norwalk Redevelopment Agency is making a move to encourage development at the Webster Street lot, but it’s disappointing that the summer concert series will not resume this year and that a Special Services District is not on its way to being created, Collins said.

“There is interest now in … looking for a developer for the Webster street parking lot,” Collins said. “A little loosening of the ice around that … I would say they’re not that far along, but there is some interest now in digging out the old proposal from 2004 and trying to bring it back to life. There’s a lot of steps that have to go on before that gets out into public view.”

“What we are contemplating is having a consultant actually take a look at updating that master plan,” Sheehan said. “That would be going to the Redevelopment Agency for its April meeting. Based on the update and obviously along with the update to the plan, you have to go through the approval process. Then we’ll probably put it out for a solicitation for developer interest.”

Sheehan said that would probably happen in the fall. “It’s pretty clear that the site has got more value than a surface parking lot,” Sheehan said. 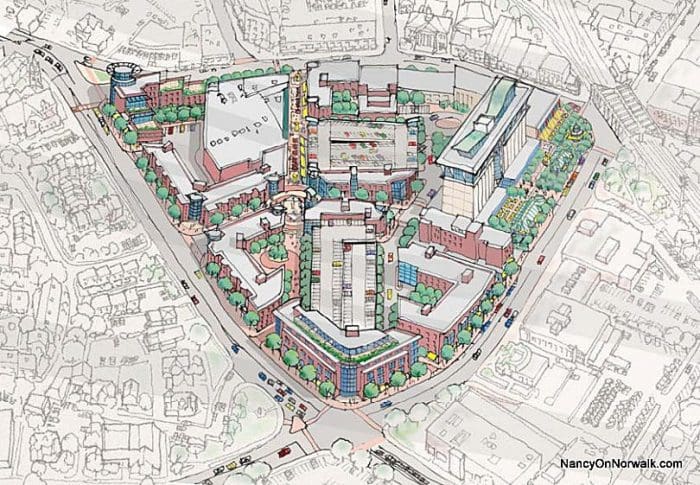 An artists rendering from the 2004 Webster Street Block Planning and Urban Design Study.

Just under a year ago, Norwalk was awarded a $200,000 Department of Economic and Community Development (DECD) Brownfields Assessment and Inventory Grant. The update to the master plan would include the environmental analysis, Sheehan said.

“We know where the hot spots are on the site; it was a phase I and a phase II. Now there needs to be a remedial plan,” Sheehan said.

The parking lot has been mentioned in connection with 50 Washington St., which was bought about a year ago by Mike Oz of Capital Construction and Development. A year ago was that he wanted to turn it into Class A office space. Oz needed to increase the parking for the building, officials said. On Monday, Oz said, “While we are getting very close to make a decision, we are not there yet.”

“He’s got a phased improvement plan for his property, but again, it’s a city asset,” Sheehan said Friday. “It’s a city-owned parking lot, the Webster Street lot, and the city needs to determine what its needs and objectives are relative to its asset.”

Obviously, Oz can’t make plans without knowing what the city intends for the lot.

“I think that’s true not just for Mike Oz, but for other developers that have expressed an interest in the site, of which there have been a few,” Sheehan said.

“I guess, just another area of discussion, there does not seem to be much movement on the Special Services District,” Collins said. “That is in the hands of the developers and property owners, of course. It’s a great idea and Kim Morque is head of the thing in Bridgeport, so I was hoping it would have more movement here.”

Morque, the president of Spinnaker Real Estate Partners, and Tom Rich of F.D. Rich, made a presentation about a Special Services District to the Common Council Ordinance Committee in February 2014. Morque, chairman of the Downtown Special Services District in Bridgeport, said the district would be designed to supplement city services and enhance the commercial district. It would create an independent board of trustees or commissioners elected by property owners, with a budget and a set of priorities that would include safety and marketing.

In September, Morque told the task force that an SSD application should be submitted within three months.

“We believe a Special Services District with clear and achievable objectives, managed efficiently and supported by all stakeholders, would be a positive factor for a safer and cleaner environment in the SoNo community and benefit local businesses,” he wrote. “It’s not an easy task for property owners to agree to voluntarily pay additional taxes and get legislative approval for an SSD.  It takes time for the parties to carefully consider the mission and vision of the Special Service District and work out the legislative requirements and governance issues.  Spinnaker is committed to continuing the dialogue in 2015 and making SoNo a great place to live, work, visit and shop.”

Collins said he is “really cheered” about parking, which SoNo Task Force members have complained bitterly about, because of Parking Authority member Dick Brescia’s recent focus on parking issues and because, “We’re going to get a new appointee to the Parking Authority in a week or two I guess.”

Last week, Brescia presented his “Wall Street Project” to his fellow Parking Authority members, which included studying the parking data and working to come up with a strategy to deal with parking problems. He said the Authority should engage in community outreach.

“Even though Dick’s proposal just covered uptown, it has a lot of relevance to SoNo, too,” Collins said.

Bike/Walk Task Force member Judd Aley attended the meeting and was introduced as the next new Parking Authority member, although he has not been appointed yet.

“I will be discussing this with council leadership,” Mayor Harry Rilling said in an email.

“Life is not full of guarantees but it’s leaning that way,” Collins said. “He is a clear thinker, the way Dick is.”

Last summer, Steven Goff of Red Parlor Records put on a four-Sunday Sono Summer Music Series. Collins said there will be no concert series this summer as it “didn’t work out.”

“The promoter knows what needs to be done,” Collins said. “It worked out well last summer but raising the money and finding anybody to take ownership is very hard. So it doesn’t look like this year it’s going to work. That was a disappointment. I was sorry to see it.”

Etc: Some disappointment, some optimism

The SoNo Task Force has focused on trash, including the development of what Collins called a “wonderful report” that tackled the topic.

“I have not had a lot of luck in promoting activity on that, I am sorry to say,” Collins said. “Of course, spring is here now so we get a little loosening of the ice on that one, too.”

One more topic: “I gather that the consultant who is supposed to be studying the street lighting has finally had her baby and is finally back on task,” Collins said.

Disappointed live music fans fret not. The “Musictochina-Norwalk Recreation & Parks Tour” -go to our so titled FB page for details & schedule. As well as the R & P web page….is here, and fully established to ensure our initiative of “Building Community Through Music” again this summer. With 300 hours of volunteered time to establish the concert series under my belt. And the City’s R & P Department fully behind the successful series. We’re now talking to potential sponsors to enhance what we’ve already put into place. We’re ready to have music an additional three evenings a week this summer in Norwalk. Totaling 33 shows! All musical evenings start at 7:00pm, with open jam night every Tuesday in Freese Park, Thursday concerts in Mathews Park, and Friday shows in Calfie Mu-Tiki Lounge at Calf Pasture Beach. Many truly talented Norwalk and local artists are featured, along with a couple of dates by nationally touring bands. So come on out to our parks, meet your neighbors, and help us continue in our mission to “Build Community Through Music” this summer in Norwalk!