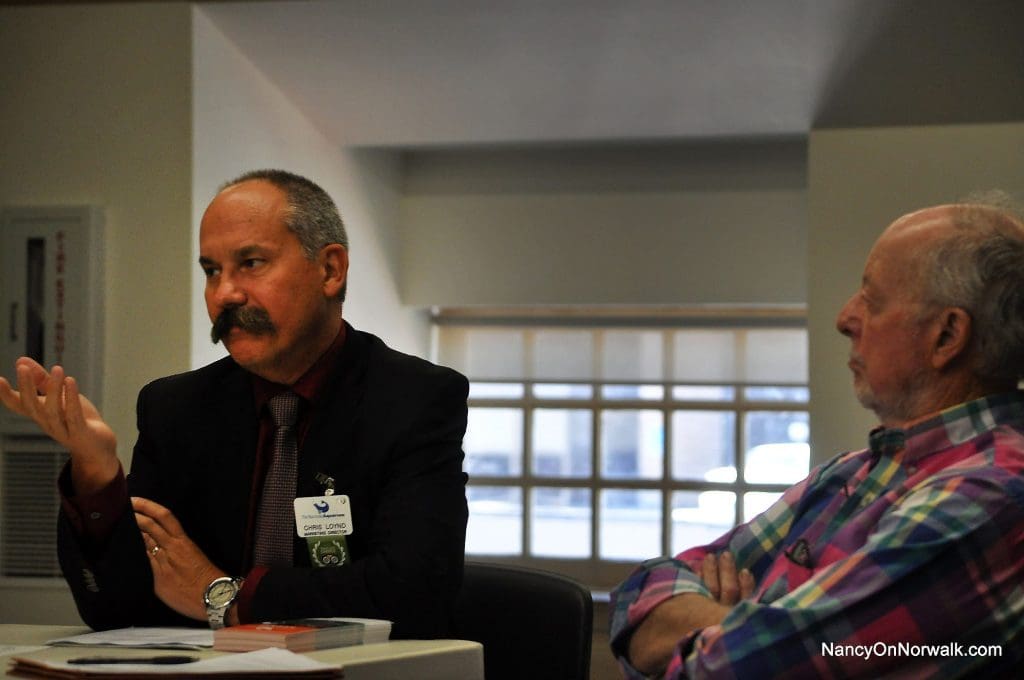 NORWALK, Conn. — Nobody wakes up in the morning and says they want to go to Norwalk for a vacation.

“Cities are competing for tourists,” Maritime Aquarium Marketing/Advertising Director Chris Loynd said last week, stoking thought among SoNo Comeback Task Force members in a presentation requested by Chairman Bill Collins. “Everybody can see this model works and you can know where it works successfully. … My biggest frustration is I don’t think you need to build anything more here. I just think you need to spruce it up, pull it together, make it a thing and get the word out. It’s not like we need to invent an old village or something.”

The talk “about SoNo as a destination” eventually led to the possibly of a SoNo Task Force marketing committee, even if Loynd said that marketing Norwalk properly would take millions of dollars.

The bones are all there, Loynd said, ticking off waterfront dining, the Stepping Stones Museum for Children, Washington Street, North Main Street and the expected mall.

“What you now need is some sort of coalescence to pull all of that together and that is branding and imaging,” Loynd said. “… Norwalk is that close to having all those pieces together, but it requires significant investment. It’s an investment in marketing, it’s an investment in everyone agreeing what that brand is going to look like, where it is going to go. My suggestion is you are leaving money on the table.”

“The bones are in place now we just have to let people know,” architect Bruce Beinfield said. “… It’s something I would love to be involved with. It’s the way that this neighborhood is going to distinguish itself, to let people know about all the good things that are happening. Where else can you find so many good restaurants where you can spend the evening going from one place to another? The kids should be coming out of New York City to come here.”

Get the young people here to have fun with a visit and they might decide the place is nice, and move in, Loynd said.

“They come here to play and visit then want to stay here and put down roots and work. Then as millennials become parents and parents have kids they are sort of locked in, but you have to get them here in the first place,” Loynd said.

But again, the competition is fierce, he said.

As an example, he mentioned Camelback in the Poconos, which has just upgraded to become a year-round water park. It’s being advertised on local television, he said.

“They are pulling Connecticut residents away from us and we have to answer that back,” Loynd said.

“Connecticut has the largest out-migration of 25 to 35-year-olds of any state in the country,” Beinfield said. “South Norwalk is uniquely situated to reverse that trend based on the authenticity, the history, the diversity and walkability that are all attributes that this demographic is looking for. …  Maybe we should collectively let (the state) know this is a place that they should invest in in order to have that outcome of keeping the young people that grew up in Connecticut in Connecticut.”

“I am listening and I understand what we have,” Redevelopment Agency Executive Director Tim Sheehan said.

“The trick with advertising is you have to have a simple, powerful message,” Loynd said. “… SoNo has got to decide what it is, what it wants to be, get a central message together and have a branding.”

“We are missing a critical thing that every tourism destination has – it’s called a department of tourism,” Stephanie Pelletier of T.R. SoNo Partners said.

That’s a funded department with paid experts who come up with “a very considered branding effort,” but the challenge is the SoNo merchants are struggling with day to day issues, even if they “are psyched and would be jazzed to be part of a tourism post card story,” she said.

A SoNo Task Force committee could set up discussions, she said.

“Since the city is doing a branding initiative, maybe we can have a cogent discussion and get an expert to come in and talk to us about tourism and marketing,” Pelletier said. “… Maybe we can get into a SoNo Task Force-sponsored marketing initiative and see what we can do because, you know, waiting for a bid to happen, we won’t be here.”

Marketing would be a multi-million dollar effort, Loynd reminded them. Beinfield said an expert could make a case to the Common Council and the Connecticut Department of Economic and Community Development (DECD).

The discussion moved to the likelihood that hotels would be built soon in SoNo. Sheehan said you need to see who is coming to stay in the hotels.

“Those are issues that most of us would find pretty illuminating,” Sheehan said. “It’s not the tourism customers that you are going to necessarily see in other communities. You really have to fine tune what market you’re going after. I think you’re going to get more of a day trip market for Norwalk.”

Tourism and branding are among the priorities in the city’s recently released economic development plan. Add Lockwood Mathews Mansion, shoreline/islands, restored WPA murals, etc. to the list of cultural assets and one can begin to see how Norwalk is both a destination or a waypoint. The Arts Commission was excited to be contacted via Norwalk Historical Society website by a Georgia bus tour company interested in a WPA mural tour in early October – great stopover between NYC and fall foliage to the north. Incredible potential.

Until the Maritme Aquarium addresses it’s over the top ticket prices, this marketing initiative will remain on the drawing board. Why not start by creative partnering with Sono restaurants, offering 10-20% off a dinner to those who attend the museum? Not do-able? Check out the Westport Playhouse success with this approach…. Of 20% off!