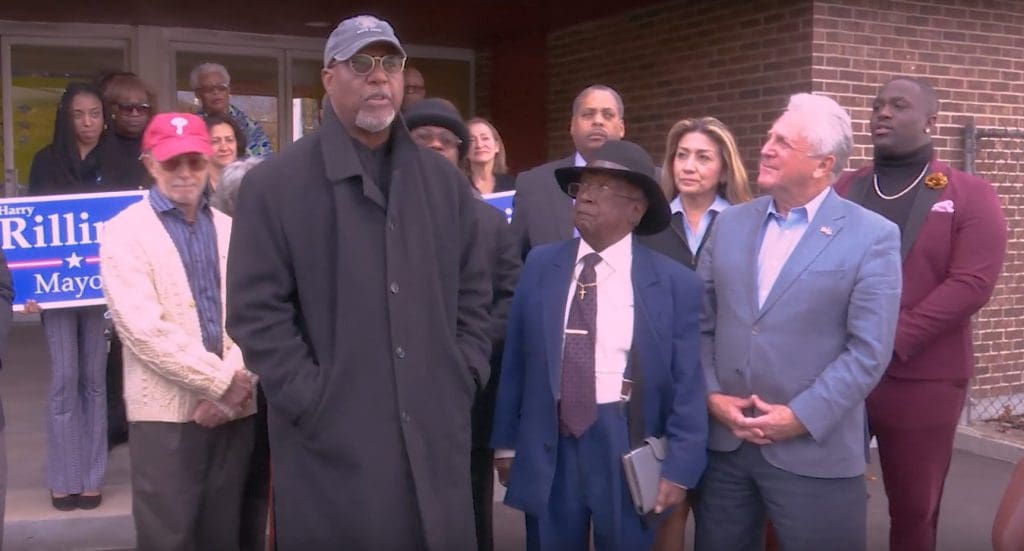 “We stand jointly behind the Mayor, although we don’t agree all the time. But we agree most of the time. Sometimes we agree to disagree. The only way you can solve problems is to constantly communicate and talk about those problems,” veteran District B Democratic leader Bobby Burgess said.

His comments were followed by endorsements from the Rev. Lindsay Curtis, pastor of Grace Baptist Church, and the Rev. Richard Clarke, pastor of Bethel A.M.E. and president of the Interdenominational Ministers Fellowship of Norwalk & Vicinity.

“Make no mistake about it, the people assembled here are the leadership of this city. Their voices are important. Their voices are acknowledged and they are people that are highly respected and highly regarded,” Rilling said, as he stood with about 20 people in front of Grace Baptist.

Simms was not supported by Rilling and the Democratic Town Committee last year in his successful bid to become a State Representative. The DTC supported newcomer Colin Hosten, who Simms bested in a primary with a 542-494 vote.

The conference also came one day after Norwalk Branch NAACP President Brenda Penn-Williams alerted her community to an incendiary email sent in June by Board of Education Chairman Mike Barbis, as explained in a Sunday morning story on NancyOnNorwalk. Penn-Williams promised Saturday to get Rilling to say something about the Barbis email; she attended Sunday’s endorsement press conference but stood to the side and said nothing.

Barbis is a close friend to Brinton.

In endorsing Rilling, Curtis said, “Why would you want to change the leadership that we have, especially some of the things that we have heard come out of the opposition?”

The press conference was planned before Penn-Williams received the Barbis email, sources said.

Curtis said he’s been a Norwalk pastor for 18 years and referred to his long history of working with Rilling, former Norwalk Police Chief, who has “always been sensitive.”

“No one reacts and does everything we expect them to do or we would like them to do, but I must say he has always been a good listening ear and in many occasions has taken actions on behalf of my parish and on behalf of our constituency, and on behalf of the entire city of Norwalk,” Curtis said.

A “good percentage of minorities” worked to construct The SoNo Collection and Rilling supported a training program which has led to several Grace Baptist members working in the mall, Curtis said.

“I have no reason to change horses,” Curtis said. “You have been in tune to our needs and you have done what you can. We are praying that you continue the mayor in this city for years to come.”

Rilling has “been out there working to be sure that the downtrodden, the marginalized are all treated fairly,” Clarke said. “…We are convinced… that he is the right person at this time, that our God has called to lead this city.”

Brinton is emphasizing that she’s not in favor of party politics, using the acronym NURDs – Norwalk Unaffiliated, Republican and Democrat supporters – as part of her campaign.

“I am so proud to be a Democrat, especially when I turn around and look at the people assembled here,” Rilling said. “… Let’s make it a Democratic victory that we can all say, ‘We did it, we did it, and we’re going to keep on moving this city forward.’”

As Norwalk moves further toward a Hispanic city, no doubt opportunities and the landscape will change over the next few decades.

This a violation of the Johnson Amendment. According to this law, the Church must refrain from overtly endorsing a candidate to maintain their tax exempt status. Based on their documented action we need to reconsider their tax exemption. Let’s add this church to the City tax rolls.

Mitch Adis
I don’t see where the church is overtly endorsing a candidate. It is the pastor stating his own history with Rilling. I would say the he has that right.

I hate to break it to South End Leaders — Mayor Rilling has hurt African American kids in Norwalk by diverting resources to ELL Program in a big way. I can’t for the life of me figure out your endorsement. Rilling and Duff have had their heads buried in the sand for 10 years, and have gotten ZERO from Hartford/DC for those programs. When programs are cut, who do you think gets hurt the most? Wealthy kids or poor kids? I’m truly baffled. The new hot phrase “quid pro quo” comes to mind. I don’t know why.

@Ron. I would agree if this occurred at any location other than the Church. However, the official endorsement was announced while everyone was gathered at the Church. This gives the impression it is approved by the Church and not just an individual citizen.

Whether this took place at a church or not is irrelevant nonsense. I’d like to see a salient response to the concerns that John O’Neill has been raising for quite some time regarding the ELL program and its lack of funding. Maybe our esteemed leaders have not responded to Mr. O’Neill’s concerns because they have been derelict in addressing the issue and cannot provide an answer.

I’m voting against Rilling. Sad thing is I voted for him in the past. Wow how things changed.