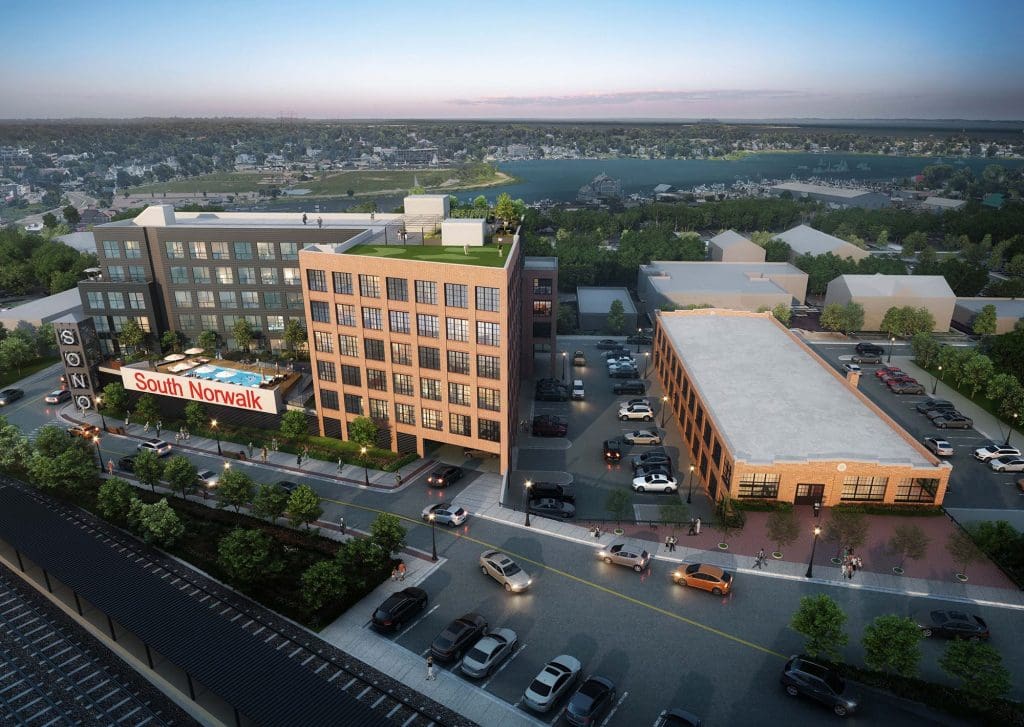 An artist’s rendering of “SoNo Metro.”

NORWALK, Conn. — Plans for a 122-unit apartment complex adjacent to the South Norwalk train station took a step forward Tuesday night when the Common Council Public Works Committee unanimously advanced the developer’s request for a Temporary Right of Access.  Encompassing a small strip of land at 30 Monroe Street, the Temporary Right of Access would enable construction of the new building’s foundation, according to Norwalk Chief of Economic and Community Development Jessica Casey. The requests move on to the full Council.

The plan, originally approved in November 2018, calls for 106 apartments above two tenant parking levels and 5,800 square feet of retail in a new five or six story building bordered by Monroe Street, Chestnut Street, and Railroad Place. Sixteen additional apartments are planned for an existing building at 11 Chestnut St., just south of the anticipated new structure.

“Will the City receive any compensation for this?” asked District D Council Member Tom Keegan.

“We are not receiving compensation for the Temporary Right of Access” said Casey.  “What we are receiving as part of the overall project is approximately $300,000 in streetscape improvements, which includes lighting, sidewalks, street trees, and bike racks…In addition to that, we anticipate approximately $250,000 in building permit fees to be paid to the City for the construction of the building itself.  The foundation permit was $32,000.  We also anticipate payment for a permanent easement which will come in the next 60 to 120 days as a second part of this discussion.”

“The (previous) building’s been torn down and it’s just an empty lot with a little pit in it,” said District B Council Member Darlene Young. “Do you know if that soil has any contamination in it?   A few days ago, I saw two kids playing there.  Kids can still access it.”

“I don’t know the specifics of any environmental contamination because the plan is to put shovels in the ground as soon as possible, but I intend to ask that question and follow up with the committee,” said Casey.

“Given where we are today, what is the building timeline?” asked District E Council Member Tom Livingston.

“They had said that that they would do the foundation work over the next 60 to 90 days…and they would be able to pull a building permit in approximately 90 to 120 days.” said Casey.

The Temporary Right of Access would expire six months after the effective date.

The Committee also unanimously advanced renaming of Chestnut Street between Monroe Street and Merritt Place as Officer Cesar Ramirez Drive, in honor of the beloved Norwalk Police officer who succumbed to cancer in January at age 71.  During his 32 years on the NPD, Ramirez had also served as Housing Authority chairman, and was a longstanding Republican Town Committee member. “Cesar serves as an example for all of us and a pillar in the community,” said Police Chief Thomas Kulhawik in an email at the time of his death.  “He epitomized a public servant and a community police officer.”

The Common Council can be expected to address these items in its next virtual meeting scheduled for 7:30 p.m. Tuesday May 12.

Who is the developer on this project?

After this disease nightmare, who the heck is stupid enough to risk a communal ride on a train, cab, uber or bus.

I would invest heavily in GMC, Ford and Dodge.

The developer is SoNo TOD, LLC.

In a time of social distancing Norwalk is cramming more people into every available plot of land. Brilliant.

@Paul Lanning – I believe when @Billy MacLeod asked “who” – he’s asking for name(s), not the name of the LLC. It’s only fair to ask – who (the person, must be a human) exactly is behind these projects? Maybe someone wants to see if they participate in local elections via campaign contributions?

It’s amazing that an LLC has as a member another LLC. Seems like some folks will do twister-mat level contortions just to keep their name out of the press.

Of course, no history book about the shaping of Norwalk’s land-use transformation under the 4 Rilling terms would be complete without the name Attorney Liz Suchy. She has quite the magical touch with Norwalk’s labyrinth planning and zoning regulations – seemingly able to greenlight any project she gets paid to pander.

This is just one more nail in the coffin – transforming Mr. McQuaid’s quaint vision of a “Village” into this packed, cramped, 10 crabs in a bucket trying to get out, dense mess of a city built purely to appease the Hartford machine – and damn the longtime local taxpayers if they don’t like it.

I’ll be more careful – everything is getting cut at this time – except for hair, nails, and municipal salaries.