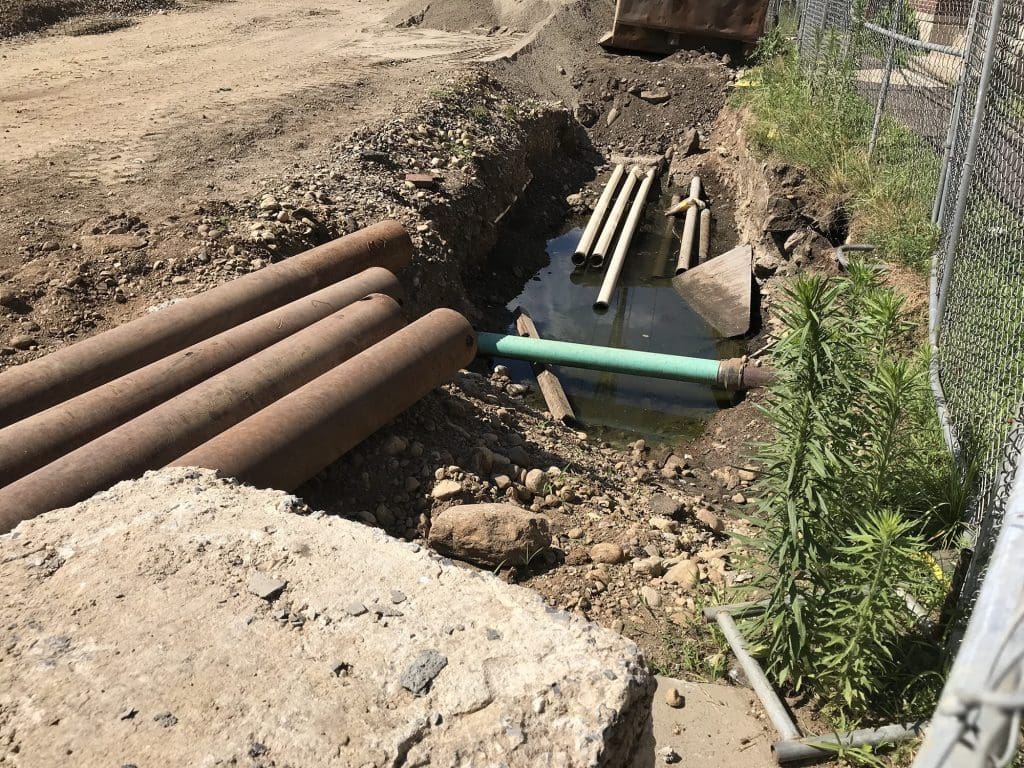 The Norwalk Fire Department found sewage in this Day Street trench, between Washington Village and Ryan Park, on Saturday. 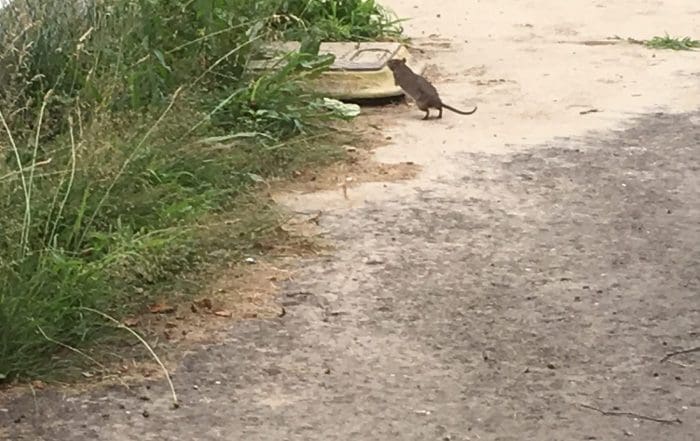 A rat on Day Street on Saturday, according to Rick Reardon. (Rick Reardon)

NORWALK, Conn. — Rats in the street, raw sewage within 20 feet of occupied apartments, and a smell of gas.

That was the scene described Saturday at Washington Village, near a construction site and a City park that has been dug up to remove pollutants.

“Yes, we did respond to a reported odor in the area of 100 block of Washington Village, on Day Street. The problem with the smell of natural gas was not picked up by our meters, although a light intermittent odor was in the air. ….

“The bigger issue discovered was raw sewage in an open pit within 20 feet of occupied housing. DEEP { Connecticut Department of Energy and Environmental Protection} and a representative from Norwalk’s Health Department responded and the sewage leak was contained, but a foot of sewage remained in the open pit. A contractor is scheduled to pump the sewage and apply slacked lime to the area Sunday morning at 07:00. The Health Department will be on scene Sunday morning to monitor the clean-up and will provide an update to Fire and DEEP officials.

“If an occupant smells an odor of gas in their home they should call 911.”

The Norwalk Housing Authority is working in conjunction with Trinity Financial to build new apartments at 13 and 20 Day Street, with the replacement for Washington Village to feature equal parts public housing, affordable housing and market rate housing. Meanwhile, remediation at the adjacent Ryan Park has progressed to the point that piles of contaminated soil have been removed.

“It’s a shame how these people have to live in those conditions, with all the dust and their windows open, the dust and the noise and the things that are going on down there, as they work,” Dumas said Saturday evening.

Many residents have moved out, using vouchers issued by the Housing Authority, Dumas said. 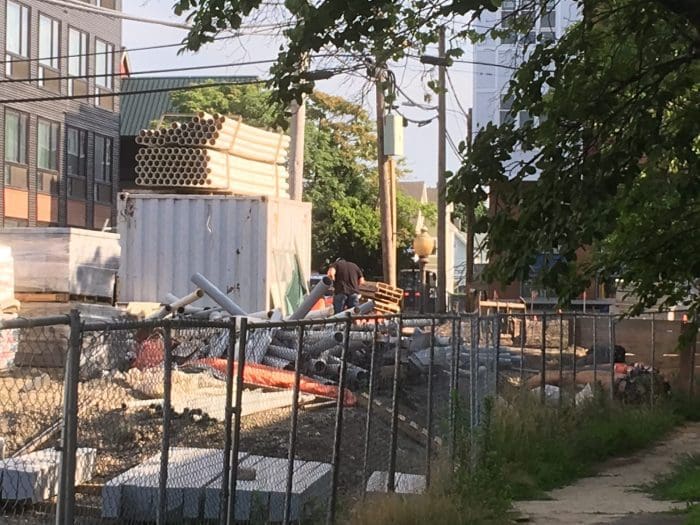 Washington Village is said to be the oldest public housing project in Connecticut, possibly the country. Phase 1 of its replacement, dubbed Soundview Landing, is located across the street.  The new name was chosen through a poll of Washington Village residents.

Khloe Lewis of Inkhouse said in a May 29 email that “new and longtime residents alike will be moving into the 10 state-of-the-art units of housing at 13 Day Street later this month and the 70-unit building at 20 Day Street is scheduled to open this summer. Phase 2 of the project is currently projected to begin construction this fall. Upon completion, this multi-phased revitalization effort will replace the existing Washington Village site with 273 new, mixed-income apartments with modern, sophisticated finishes and exceptional amenities, all in the heart of historic South Norwalk.” 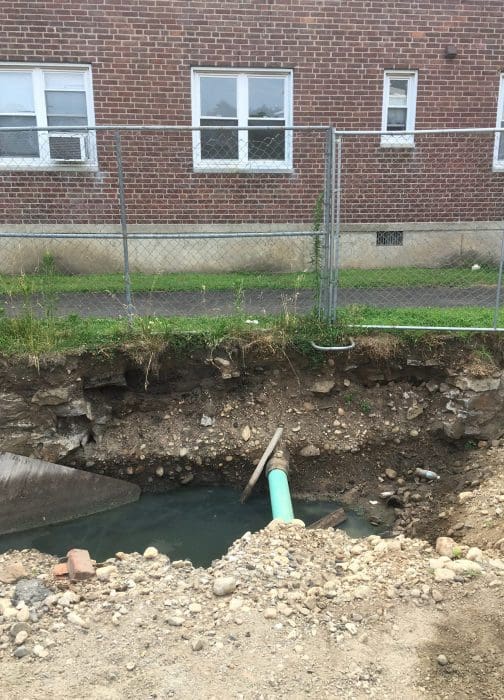 While there’s a fence between the hole and the sidewalk, the gate to the fence is left open when construction workers leave.

Reardon provided a photo of a rat and said he’d seen half a dozen. Dumas said he saw one or two. 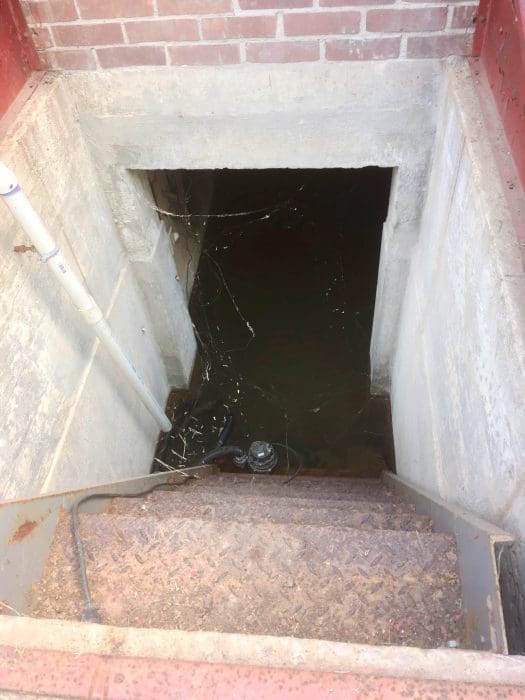 There were rats swimming in this Washington Village basement Saturday, according to Rick Reardon. (Rick Reardon)

The water is underneath building two and the Health Department talked about evacuating a woman who lived there, Dumas said, asserting that the Norwalk Housing Authority wanted to pump out the basement but were told to hold off because the contents of the water are unknown.

Norwalk Housing Authority Executive Director Adam Bovilsky did not respond to an email from NancyOnNorwalk. Bovilsky was on scene Saturday afternoon, Reardon said.

DEEP Emergency Response Coordinator David Poynton said there was grey water in the basement and the trench. It wasn’t sewage in the trench, he said.

Reardon produced a photograph of the trench filled with fluids, dated May 25.

“Not sure why sewage was allowed to sit in open pit. The pipe that was leaking, or caused sewage was capped off, after we all were there,” Prescott said in an email.

O&G Industries, construction manager for the site, “has retained a contractor who is coming out first thing in morning,” Poynton said. “They fixed the pipe.” 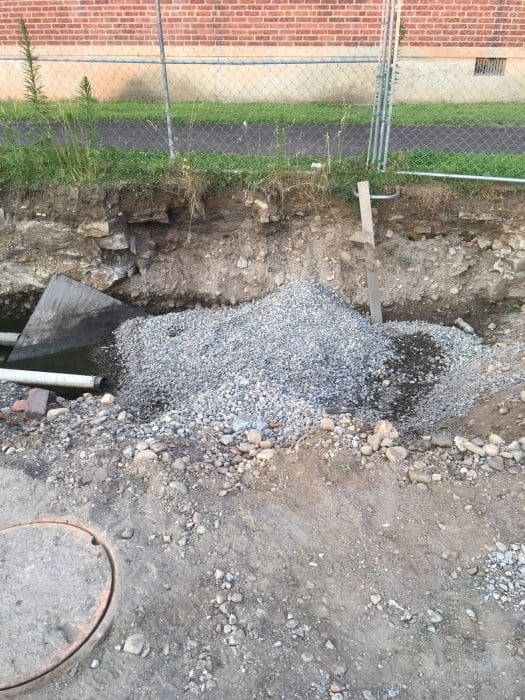 There’s a gas leak, and Eversource propped manhole covers up so there wouldn’t be an explosion, Reardon and Dumas said.

Prescott said he’d been told that Eversource has a practice of venting a known gas leak in a street, until they can get a crew to dig up road and repair the problem.

An Eversource media contact said she had no record of a gas leak at the location.

Asked about the problems by email, Mayor Harry Rilling said he’s out of state but will have the Department of Public Works inspect the area and report back to him.

Reardon said the basement door had been unsecured, and any child could have gone in to the flooded basement.

“How can you have people living in a building above five feet of standing water?” he asked. “…I don’t care what economic background these people are from no one deserves this.”

“There’s quite a few issues in Washington Village that should be addressed,” Dumas said.

Dumas was recently appointed to the Common Council as a replacement for Faye Bowman, who has left Norwalk. He said he’d be asking Health, Welfare and Public Safety Committee Chairman Nick Sacchinelli (D-At Large) to discuss the issues.

“It’s sad,” Dumas said. “There are a lot of people that pay taxes, they work, they should not be going and living in these conditions.” 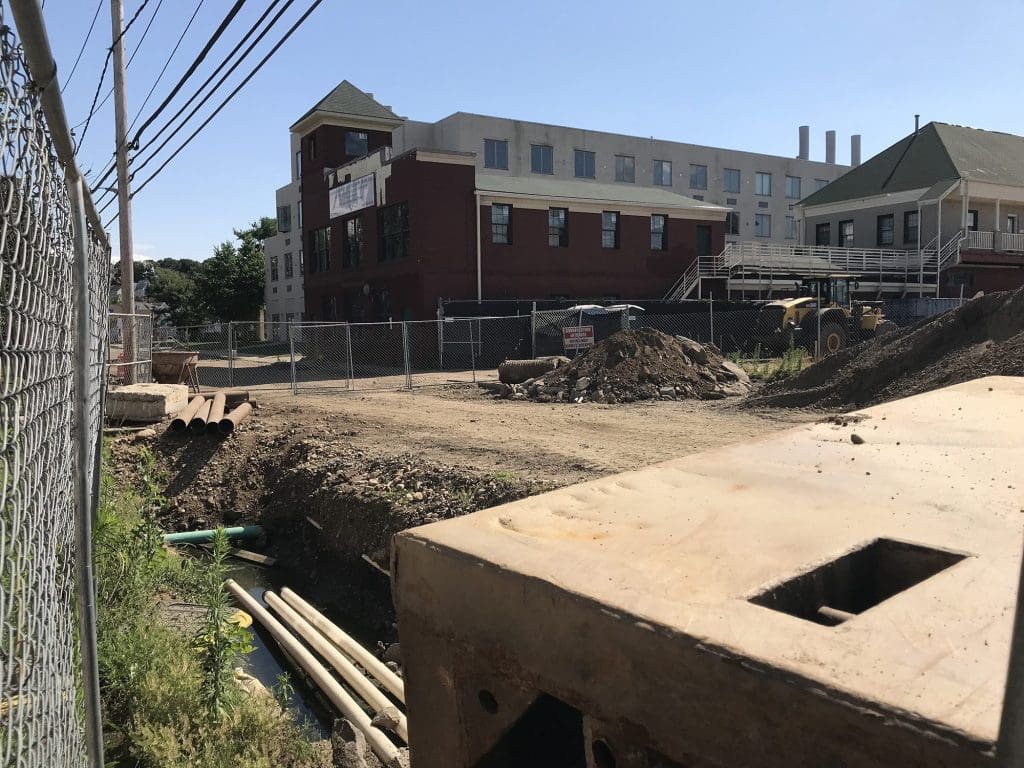 update An Eversource media contact said she had no record of a gas leak at the location on Sat.

This morning after speaking to a RDA executive on site asked him if I could offer any insight on Sat events he said no we are all set, not a little but a lot anger filled the air along with natural gas.

So I called the Eversource hotline for gas smell and he dispatched a truck asap, before the dispatcher left asked him to read the above article he in return to a push on the call.

Eversource showed up and found a substantial leak and called for the emergency crew to respond asap.

People who live in the Village say they smell gas all the time fire department does a great job they are not part of the problem they take each call seriously and always follow thru.

There will be more updates as the story unfolds.

lets talk rats—- Tom Cloister stated today rats are a concern yet no visible rodent control has been in place since construction started what is he waiting for millions are being spent but no money for the rat boxes? The city has had complaints about rats. Still no visible boxes around the day st side is there? None wetre seen in the complex as well.

Trinity Financial builds in cities they didn’t realize the surrounding work was going to create this chaos. These rats are inside the buildings but Tom like’s to minimize his efforts to solve this problem with rodent control for the 200 or so still living in the Village.Notice we hear how many residents yet no children are mentioned.

Tom Cloister said today no sewage was seen yet if he returned my call last week he would of seen plenty. Pictures from May show the same pipe leaking sewage its obvious from talking to the residents the smell has been there since then.

Tom talks tide cycle Chimento agrees water in the basement isn’t sewage yet sewage wasn’t the object and with the help of The Hour it becomes confusing and they help enable the city . ,hazardous waste coming from Ryan park in the ground water cannot be ruled out until tested can it?

Remediation of PCBs and other chemicals down to a certain point has been done in Ryan park , contaminants still remain below where they stopped digging acceptable compliance with the EPA and the state DEEP.

Tom didn’t talk about the ground water level today did he? we all know groundwater doesn’t go uphill does it?

dust collection reports have not been delivered yet to those asking for them in official capacities , hard to say if that was done right without reports on dust Pictures that show unreasonable dust during and after all work days for months intermittently during construction are of course available. pictures are great when your working with limited trust Im told.

Dust from a haz mat site is dangerous but regular dust is just as bad when your in the business of protecting people.

For some reason no one thought anyone was watching the progress and what was going on I truly hope this puts Norwalks experts on notice on phase two and hire responsible contractors and not always the lowest bidder is the best.

Why is the RDA involved in remediation from what we have seen they do a very poor job , when we had the first meeting they assured us nothing like this would happen.

seriously it was like fishing watching the bobber go under and look what we caught. —– rookie fish

The City says no one lives there. Who owns all that laundry drying on the lines