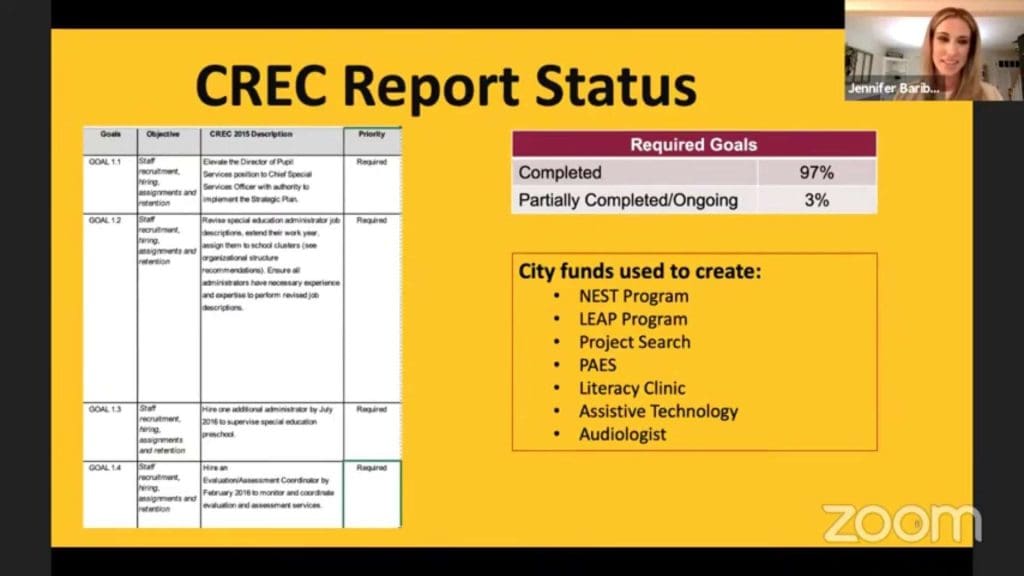 Jennifer Baribeau, Ph.D., an independent education consultant based in Massachusetts, speaks to the Norwalk Board of Education during Tuesday’s Zoom meeting.

NORWALK, Conn. — A trio of Special Education consultants has lauded Norwalk Public Schools for the work done to improve the SpEd department, and laid out a thoughtful, detailed analysis of how to keep the ball rolling.

“I will say that a lot of the times were called in for to look at special ed services in a school district, it’s because of a major problem a lawsuit a class action lawsuit or something you know, big going wrong. And some districts call us in just because they want to improve and that’s what happened here,” Lauren Katzman, Ed. D, said at Tuesday’s Board of Education meeting.

The conversation that followed alluded to legal issues and touched on the problems that have brought Edward Fergus, Ph.D. to town for an extensive “Equity in Education” effort.

It’s “incredible” that Norwalk Public Schools achieved 97% of the goals laid out by the CREC, Jennifer Baribeau, Ph.D. said.

“We cannot give enough credit to your Special Education team for getting these systems in place. It is not easy work to do. They spent a lot of time on this, there was a lot of evidence to back that those recommendations from the CREC report have been fully implemented,” Baribeau said.

“The budget has been stabilized, out-of-district placements have been reduced significantly …funding that traditionally goes out-of-district to pay for those schools actually has come back into the district to create some really strong programming,” she said. There’s City funding to create programs and a literacy clinic, hire an audiologist, and purchase assistive technology. “Really, I haven’t heard of any district that’s doing work like that. So really want to give a shout out to your current team for doing these things, recognizing that the budget needed to be stabilized and then using that funding to really create those programs and districts.”

As for what’s not quite done, “It has been very hard, not just in Norwalk but in districts all over the country, to fill speech and language positions, special education teaching positions. What your team has done is they have created partnerships with universities, they’ve created pathways within the district for staff to be licensed,” Baribeau said.

Even so, Baribeau said, “We think as far as the CREC report goes, it’s time for you guys to celebrate this work. It’s time for you to, I would say, put CREC behind you,” she said. “You guys have built the foundation, the technical systems are in place, it’s really time to think about shifting to that adaptive mindset to support the district in moving forward to the next level.”

The meat and potatoes of the two-hour presentation was wrapped up in phrases like, “Special Education is not a place” and “focused on compliance, more than instruction.”

Katzman referred to the federal Individuals with Disabilities Education Act (IDEA) when she said, “most of the conversation around special education is focused on compliance.”

While the district must comply with the law first and foremost, “We want to, again, shift people over to thinking more about instruction and achievement,” Katzman said. And:

There’s limited collaborative problem-solving outside of Planning and Placement Team (PPT) meetings, and, “We heard that because there weren’t these collaborative structures that in the meetings is when all the decisions and the problem solving was happening, which made the meeting sometimes uncomfortable. That term retaliation came up in those, made them overly long. Not that they shouldn’t be long, if it’s appropriate, but overly long because they’re just trying to problem-solve there,” Katzman said.

The Collaborative recommended that the district have a neutral process to mediate and resolve disagreements. Katzman said:

“Students with disabilities are suspended at much higher rates than students without disabilities, 9 percent versus 3 percent,” she said. “I mean that those numbers are low, which is good, but it’s still a lot more for students with disabilities. And then if you look at where that’s happening, a lot of it is happening for students who are classified with an emotional disturbance. And if the IEP is attending to a student’s needs, and a student with an emotional disturbance has social emotional behavioral needs, then why are they being suspended? So, what’s not happening there?”

There’s confusion about the difference between struggling to learn English and having a disability, and sometimes people say “well, where else can we get them services” and just give students an Individualized Education Program (IEP), according to Katzman. “You want to think about that in terms of when students are first classified, what they’re classified as having, and I promise you that this is an issue across the country,” she said. “And there’s some really good work happening in different places that can help your district to address this issue.”

It may sound expensive but it will ‘save dollars’

“There is no SpEd family that wants to hire an advocate or a lawyer,” BoE Ad-Hoc Special Education Chairwoman Erica DePalma said. “We have medical bills, we have adaptive everything. We have specialized extracurriculars that come at a cost, even our babysitters cost more because they need specialized training. It is not something that we want to add to our plate. So I hope that we get to that desired state, because I think there’s a lot of families out there that struggle with incremental costs.”

“One of the gaps that we currently have in our infrastructure is that we have just one person who’s mainly focused around data accountability from the state, but not necessarily a wishes and analytics team that is taking the special education, multilingual learners, general education, gifted and talented, all of these different data points, and having a comprehensive tool that is compiling all of this information,” Norwalk Superintendent of Schools Alexandra Estrella said.

While there’s “an investment factor that … we have to keep in mind,” NPS is talking with one of its philanthropic supporters about its current data systems and the effects they have on students, Estrella said.

While an investment “may sound expensive, when instruction is data-driven, it will improve our student outcomes, and it will ultimately save taxpayers dollars,” DePalma said.

“I think a lot of the work we need to do moving forward is shifting the mindset of Special Education being a service not a place, having a clear emphasis that special education is not a permanent location, it is something that should build the capacity of the child, so they can be reintegrated into the general education setting,” Estrella said. “…I’m looking forward to the integration of the Special Education department into curriculum and instruction. Because we really have to emphasize the importance of exposing our students that have IEPs to standard-based instruction, so that they can develop the skills and strategies necessary to fully integrate into the general education program, once they develop and build the capacity. So again, just thank you to the team for an amazing job so far, and for setting the platform for the work that needs to happen moving forward.” 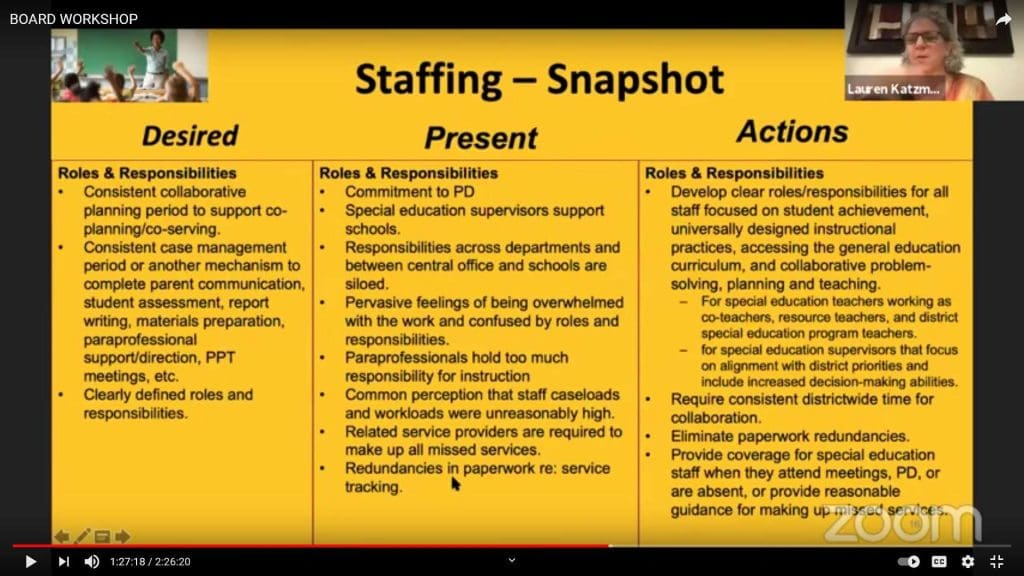 Lauren Katzman, Ed. D. speaks to the Norwalk Board of Education during Tuesday’s Zoom meeting.

A little confused by one statement: “Families who are White with the means to hire Advocates and Lawyers “? — What the heck does that mean? Do only white people have the “means” to hire advocates? What about white people who don’t have the means? What about Black families that do have the means? It’s time to get off the racial component of every venue of life. And since when are Asians a forgotten component of minority discussions? Why does every consultant have a preconceived narrative that to bend the results to..

@John
Welcome to the world of identity politics. I wish the voices of conservative black men and women would be heard. Now go back to your white privilege corner and if and when you fall into an aggrieved group, let us know. Of course, I’ll suggest that you should start clamoring for reparations from the British. They haven’t been kind to many of Irish descent and you and your family’s lineage should receive $$$’s for that. You should also get a credit for slavery since your relatives were likely not here