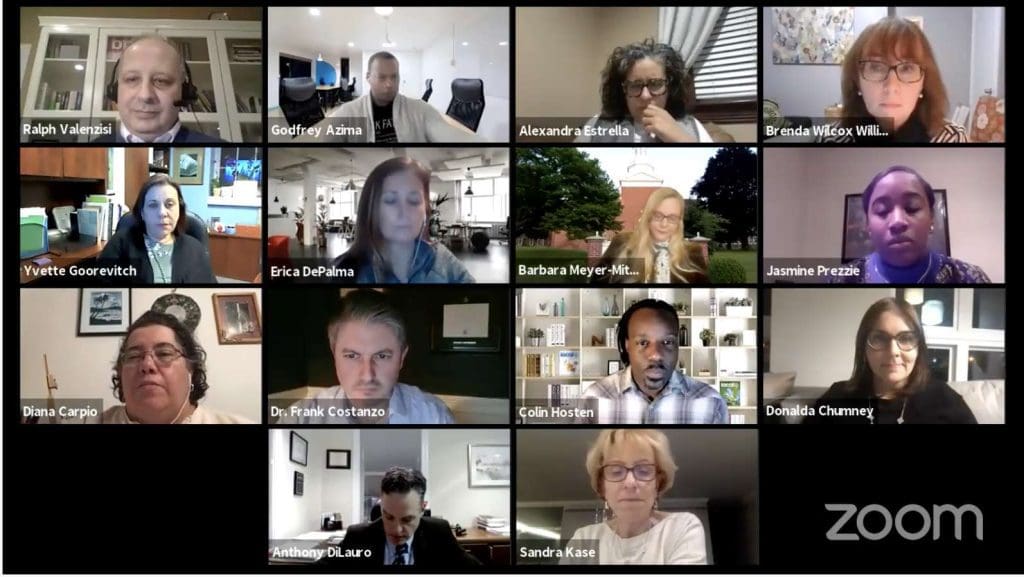 Tuesday’s Norwalk Board of Education meeting on Zoom.

NORWALK, Conn. — When will winter sports start in Norwalk, if at all? What is the status of some of the ongoing studies in Norwalk? These were just a few of the questions that Alexandra Estrella, Ed.D, Norwalk Public Schools Superintendent addressed in her report on Tuesday at the Board of Education Meeting.

The studies serve a purpose, Board of Education Chairman Colin Hosten noted, as Estrella is “in her first year as a superintendent and a lot of that work in the first year entails getting a lay of the land and setting up a plan for the subsequent years, and there’s a lot to cover.”

“I think that we are all pleased to see the progress of so many studies to help us get a better understanding of the way that we deliver instruction,” he said.

At least three parents raised concerns during public comment about when the winter sports season will start in Norwalk, as surrounding towns have opened up practices and tryouts.

Parent Jeffrey Fattone, president of the Norwalk Junior Football League, questioned when sports would be up and running in Norwalk as the State Department of Health allowed some winter sports activities to begin Tuesday.

“The State has opened it up, but Norwalk has, I guess pushed back a little,” he said. “We went through this in the fall, we were in contact with the Mayor, and it just didn’t go anywhere.”

Other parents commented that they were upset with the “lack of transparency around the delay” with winter sports and that it was “unacceptable” for the district to be caught off guard with the start of the season.

Estrella said that her office is meeting with the Norwalk Department of Health on Wednesday, Jan. 20 to get the district’s plans reviewed to make sure they could ensure the safety of their students.

“We’re all looking at safety and the well-being of our students first and foremost,” she said. “When the CIAC released a report that districts could consider moving forward, they made it very clear that we needed to first ensure the safety and well-being for students.”

Estrella said an update would be issued this week.

“We will provide an update on this matter before the end of this week, based on the recommendations made by the Department of Health in collaboration with the central team, but I just want to reassure everyone that what everything we’re doing is first and foremost, to ensure that our students are safe and healthy,” she said.

Board member Mike Barbis said that he would like to see sports and other programs up and running for students to give them a relatively safe activity.

“It’s not fair to our kids, our kids are kind of locked at home and trapped while going to school, and they’ve been socially isolated. And we really need to do a better job of providing safe activities for them,” he said. “In our wealthier towns, a lot of these parents can pay for kids to play in private leagues, all those private leagues are up and running.”

Estrella said that the school district would be working with the city on an “efficiency audit.”

Resident Lisa Brinton, who has run for Mayor in the last two elections, voiced support for an audit to help find efficiencies between the City and school district. She also suggested that the audit could be used to help the City and schools work closely in other areas, such as enrollment tied to building and planning.

“The need for the City and BOE to be more proactive and coordinated than we have been in the past is paramount,” she said. “IT, HR, and other administrative functions may provide areas for joint operational efficiencies, but wouldn’t it be nice if this audit actually led the City and Board of Ed going a step further, from a planning and revenue point of view, by better linking enrollment with building and tax records?”

The school district is also in the middle of conducting numerous studies and community engagement projects, including a facilities study, an equity listening and learning tour, a special education review, the review from the Connecticut Center for School Change, an enrollment and capacity study, and a new operating strategic plan. Estrella gave an update on a few of them.

On the facilities study, she said that they had an “initial conversation with the team that will be working on the facility study.” So far, she said they discussed priorities they wanted in the study that would align with previous capital plans.

The study will also examine whether the building and the use of the facility align, and if not, what can be done to rectify that.

The goal of the facilities study is to provide the district with a clear path of necessary school improvements for its capital plan.

Yvette Goorevitch, Chief of Specialized Learning and Student Services, said that the special education review is almost at its conclusion, as they’ve finished more than 30 focus groups and completed two days of classroom and program observations. They’ve also sent a survey to parents and guardians about the district’s special education placements that has received 234 responses, she said.

As for the enrollment study, Estrella said that is almost complete and will provide the district with crucial insight into how student populations are dispersed throughout the city.

“The final one is looking at the enrollment and capacity of the district, given the current facilities and the number of students within the facilities,” she said. “It will give us a lot of insight in terms of looking at where the different concentrations of student populations are given within our district, and how the density is impacting enrollment throughout the district and some of the things that we have to take into consideration as we continue to plan around the different programs within our district.”

Estrella said that their strategic operating plan task force will continue to meet each Thursday to review all of the information from these studies and incorporate them into the district’s strategic plan.

Story corrected at 1:43 p.m. to show that NPS staff is meeting with the Norwalk Department of Health.

The Superintendent still doesn’t get it regarding sports and her lack of urgency and transparency. Other towns and districts also needed approval from the local health department and made sure they did so before 1/19, and in most cases before 1/16. Why is Norwalk meeting with the health department on the 20th, the day after practice could start? We’ll never know because she doesn’t respond to correspondence neglects to address that in her remarks to the board.

Edward,
The Superintendent is in a tough spot … she reaches out to the City side and gets no response. Let’s remember, Norwalk is the only City Hall in Fairfield County that is still closed … the City is not up and running. It all starts from the top 🙂

Edward, Edward, Edward — Don’t you get it? The woke left doesn’t give a damn about athletic competition. There are winners and losers. That can’t be allowed.