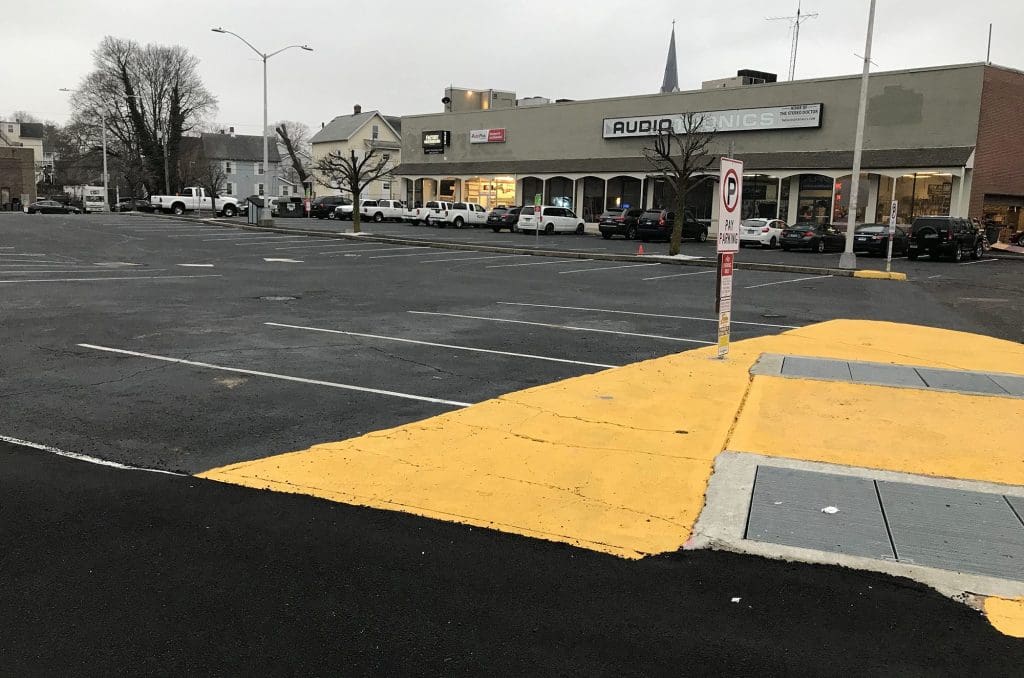 NORWALK, Conn. — The lawsuit filed in regard to “POKO” properties will resume Monday with cross examination of Redevelopment Agency Executive Director Tim Sheehan.

The “Milligan defendants” had been looking to join a motion to dismiss filed by POKO-derivative ILSR Owners. Judge Charles Lee on Wednesday rebuffed that request and ordered the scheduled hearing to go on as planned.

“I think this last gambit may be a bit much,” Lee said to Attorney David Rubin, representing Jason Milligan and assorted Milligan-managed LLCs. 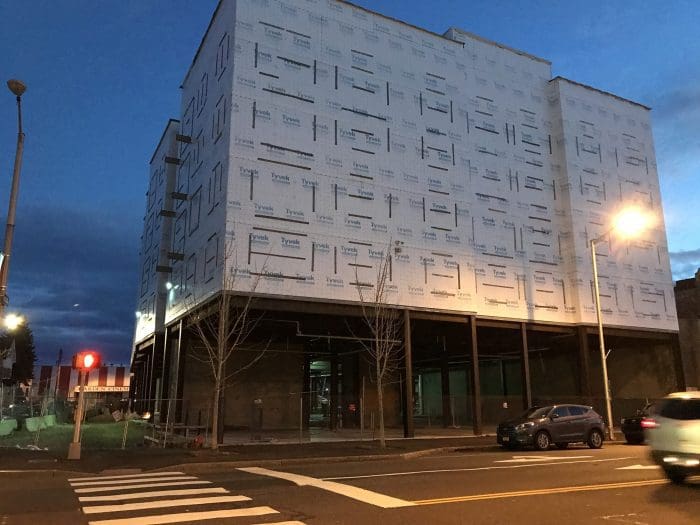 Wall Street Place phase I, referred to by many as “POKO.”

Milligan and Richard Olson of POKO Partners are being sued by the City and the Norwalk Redevelopment Agency under their LLCS, Wall Street Opportunity Fund and ILSR Owners, respectively, because Olson sold Milligan properties that were slated to be used in “POKO Phase II,” the planned second phase of the Wall Street Place development, commonly referred to as “POKO.”

Under the Land Disposition Agreement, the Redevelopment Agency had the right to approve the sale by giving the potential buyer redeveloper status. That didn’t happen.

Construction on Wall Street Place phase I halted in mid-2016. The properties now owned by Milligan were slated to be used as parking for phase I.

The complicated lawsuit has grown to include CC Rivington and Komi Ventures, both mortgage companies, the latter managed by Milligan. Komi foreclosed on Wall Street Opportunity Fund, in what the plaintiffs call part of unfair trade practices. CC Rivington assigned the $5.8 million loan to Komi but land records showed, as of December, that CC Rivington still had a $5.2 million mortgage on the property.

At this point, Lee is holding a hearing on the plaintiff’s request for temporary injunctive relief – a trial would come later. Lee paused the hearing in December, and it’s been set to resume Monday. This was after the plaintiffs amended their complaint; the plaintiffs have issued subpoenas in an effort to understand the financial arrangements between the parties and who is actually involved. Milligan was told he could submit a bill to the Redevelopment Agency to cover his legal costs in preparing a defense to a complaint that Lee called “poorly drawn.” Those costs are $21,519.25, Rubin said in an affidavit.

ILSR on Feb. 15 filed a motion to dismiss “for lack of subject matter jurisdiction,” alleging that because the Redevelopment Agency did not exercise the methods to “cure the default,” as outlined in the LDA, it has no right to sue.

“He is wrong again.  The deposition of CC Rivington went forward last week notwithstanding the ILSR motion to dismiss.  Written discovery has also gone forward although it is not yet complete,” Attorney Joseph Williams, representing the Redevelopment Agency, wrote Wednesday to NancyOnNorwalk.

Lee said Wednesday’s status conference was inspired by “four substantive motions” from the defendants: one requesting that Lee making a ruling without a trial, two requests that some of the charges be dropped, and the attempt to have the case dismissed.

Lee was concerned, he said, that much time could be spent on testimony, only to come to the conclusion that the LDA defined “exclusive” remedies, not “permissive” ones, invalidating the case.

Williams indicated that the plaintiffs want to move ahead, calling the motion to dismiss “incorrect on several points” and promising to file responses soon.

The Redevelopment Agency will be presenting proof of a need for emergency injunctive relief, he said.

“That ability has been put off for a few months now by motions by the defendant, which we believe have become increasingly merit-less, especially when people who are not party to the contract are continuing to make arguments under a contract they are not party to,” Williams said.

Rubin said he planned to file a motion to dismiss, because although WSOF is not party to the LDA, the relief sought by the plaintiffs – to have the property sale revoked – affects WSOF as well as ILSR.

“I believe that if the court hears these motions, this injunctive hearing will not be going forward,” Rubin said. “… I think that motion to dismiss needs to be heard before anything else can be heard.”

“I disagree,” Lee said, asserting that the City anticipated ILSR’s action by saying the default cannot be cured, and he will rule on that.

ILSR could seek mediation but hasn’t done so, Williams said, adding that it still could.

The request for a temporary injunction is scheduled to be heard over the course of four days, Monday to Thursday. Lee has said he hopes that it will wrap up at that point.

Legal costs to the Redevelopment Agency through Dec. 31 were $108,725.31, Sheehan said in a Tuesday email to NoN, explaining that, given the hearings held over several days in December and the 30-day billing cycle, “I anticipate a large increase in the Legal Line Item of the Operating Budget in the forthcoming January Statement to be presented {to the Agency} next month.”

Thank you for the reasonable legal summary.

It would be great if you also gave a practical summary?

The city has not once explained to the citizens what the goal of this lawsuit is. How does it possibly help the city?

Besides boosting a few egos this DUMB lawsuit does nothing but waste hundreds of thousands or soon millions of taxpayer money. Joe Williams has racked up between $300,000-$400,000 of bills and the actual trial has not even started. These past 10 months have only been for a preliminary injunction!!

Joe is going to have a career year or two. The big boys at are Shipman are psyched!

The stated ultimate relief of their DUMB lawsuit is the absurd idea to give the properties back to a defunct single purpose LLC. An LLC who’s main principle is deceased. An LLC without money, desire or ability to own or build anything.

How does it make sense?

The lawsuit is a distraction from failed Phase 1. Nobody is even talking about the Tyvek Temple.

It is much easier to hide behind lawsuits than to solve complex problems, or be a leader.

Where is the entire POKO explanatory statement from Rilling?

What is the plan to fix Phase 1? This lawsuit has nothing to do with Phase 1!!

Can the city walk and chew gum?

Jason, You are the one costing the taxpayers of Norwalk all that money. You purchased a piece of property, KNOWING, that there was an agreement between the owner and city not to convey it without their permission, and you did it anyway. You should reimburse the taxpayers of this city the legal expenses incurred suing you.

That is a very simplistic and inaccurate description of what happened.

The project failed on a massive scale and in so many ways. There were already multiple owners for multiple phases.

The project parcels were never all acquired. The parcels required to complete phase I which is the Tyvek Temple have not all been assembled. In fact, one of the phase I parcels needed is the Dias El Dorado Club which is suing the City for like $3 Million.

The City, The Redevelopment Agency, Citibank, John McClutchy all hid behind a Non Disclosure agreement trying to cook up a scheme to get the taxpayers to bail out this disaster!

Rich Olson was stuck for two years and counting not able to get out in any way. There was default interest on a hard money loan for the phase II/phase III properties accumulating fees at a staggering rate. Like $2 million worth.

Nobody had any solutions or any guts accept me!!!

I am ready, willing and able to have an open and honest debate about all of it. I am open to a variety of solutions. I gave McClutchy an opportunity to buy the parcels he wanted or needed and he chickened out. He hadn’t lined up all of the tax payer bail outs yet.

Notice that nobody else is willing to talk openly.

For the record the poorly written Land Disposition agreement that was amended I believe 11 times is very clear about what should happen if an unauthorized transfer were to take place.

The City and RDA are in breach of the LDA becuase they have not followed it.

The RDA also has the ability to buy the parking lot back. Notice they have not once mentioned that fact or pursued it.

Taypayer-you are ill informed or misinformed or both. I can’t blame you because the current leadership does a nice job of lying.

Happy to educate you and anyone else who cares to listen.