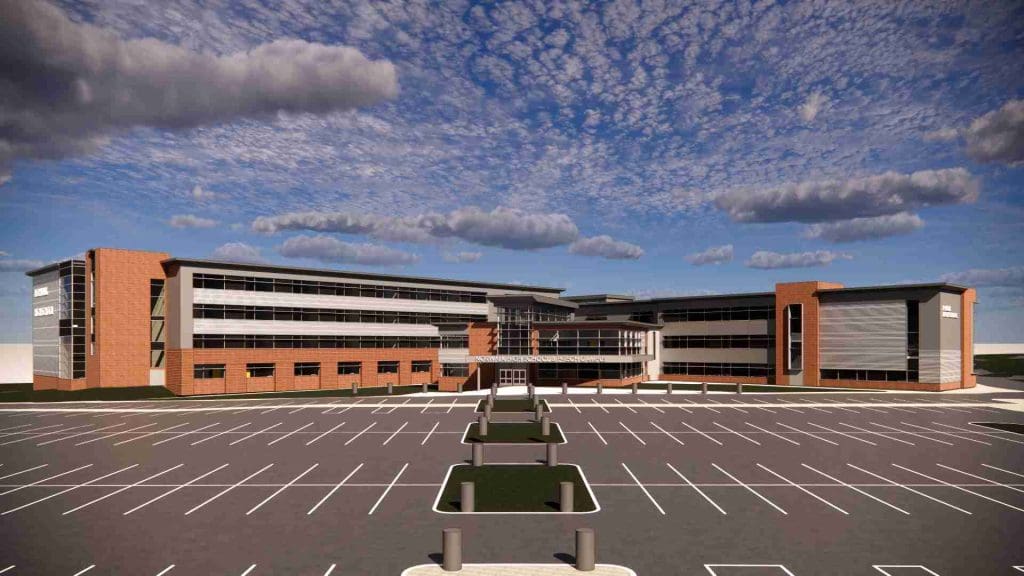 An artist’s rendering of the developing design for Norwalk High School/P-Tech. The idea is to bring natural light into the classrooms, Building and Facilities Manager Alan Lo said.

NORWALK, Conn. – The State has committed another $50 million to the Norwalk High School project. In addition, the City can get 50% reimbursement for construction of a new pool facility, up from the 40% the City’s construction manager predicted in March.

The City developed concepts based on a $225 million budget but the legislature cut that to $189 million. To cut costs, City leaders took the pool out of the budget but funded its inclusion in the school complex’ design. Controversy ensued and in March more than 900 people signed a petition posted to “Save the NHS Pool!”

The State budget passed by the legislature last week and signed by Gov. Ned Lamont on Monday changes the $189 million figure to $239 million.

“I thought that 239 was a good number,” Duff said Wednesday, noting that the City asked for “225” but there are inflationary costs and “I felt that it was that was smart to provide additional funding” for costs that “may be out of anybody’s control.”

The 80% reimbursement and the higher budget figure will “save Norwalk taxpayers $139 million,” Duff said.
In addition, the State budget also says Norwalk can get 50% reimbursement for purchasing properties adjacent to the high school.

With the 80% reimbursement rate, “The state is paying $191 million for the school,” Duff said.

“In addition to the 80% reimbursement from the state for the Norwalk High School/ P-TECH project, we applaud Senator Duff’s remarkable efforts to secure another $50 million in state funding. Senator Duff continues to deliver and be a real champion for all Norwalk residents, especially our youth. Not only does securing these funds save our residents money but it invests in the future of our community by making sure our students have access to a 21st-century world-class education. We want to thank both Senator Duff and Governor Lamont for their tireless efforts and continued commitment to Norwalk.”

“This is even more than we had hoped for,” Norwalk Board of Education Chairman Colin Hosten said in a Thursday email. “Along with the increased 60% reimbursement for new construction over the next 25 years, this is one of the best state budgets for Norwalk Public Schools that I can remember. This is going to be transformational for generations of our students and families.” 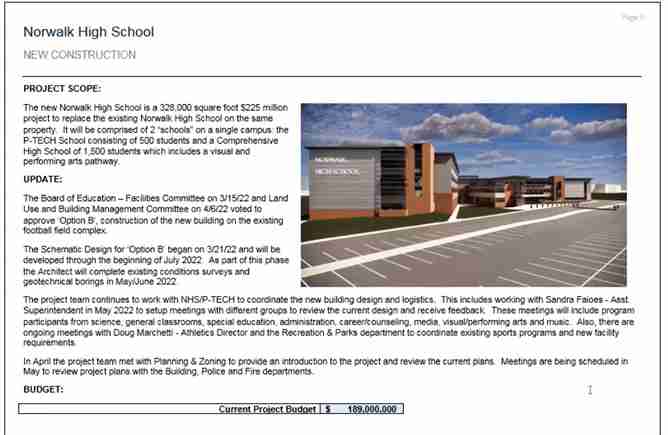 A screenshot from last week’s Common Council Land Use and Building Management Committee meeting on Zoom.

a former blk eyed peas member with an education in technology (Steve jobs HS program in CA) had some very important concerns about preparing kids for the job and open markets of the near future… 2035, and so on. I think that needs to be the topic… here’s the interview:
https://youtu.be/t4iCb52b8EI
Then there is information & investors for entrepreneurs:
https://youtu.be/BzoWqMWKyYE
Check out the conversations, most helpful!

Unfortunately, buildings don’t prepare children with the knowledge and skills for careers and life in today’s rapidly-evolving world. Great teachers to that! Can’t we have some of our own taxpayer money back for that?

This looks like another state institution that our BOE will allow to crumble before our eyes.