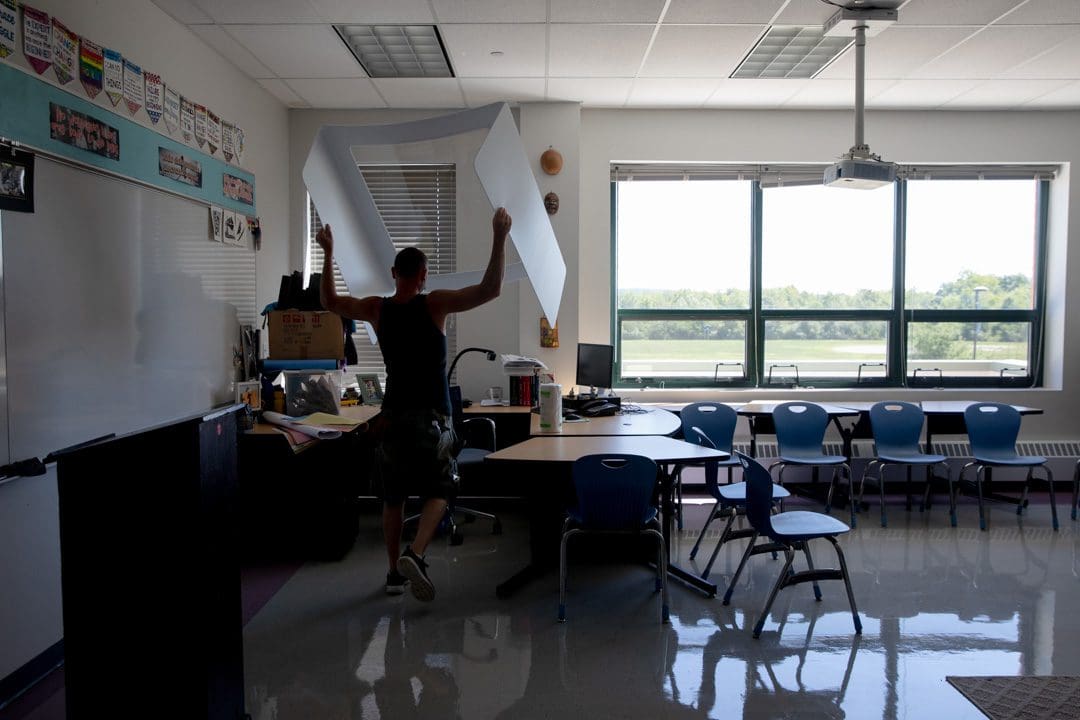 Eric Marston, custodian, carries a desk shield for teachers in a classroom on Thursday, Aug. 20 at Middletown High School. Custodians who worked the second time shift before the pandemic will instead work the first time shift to meet an increased need for cleaning at one time, said Marco Gaylord, chief of school operations. (Yehyun Kim, CTMirror.org)

State officials made adjustments Thursday to how much money districts will receive to open schools during COVID – opting to link some of the funding to whether school districts are offering in-person instruction.

The reasoning, they said, is that districts don’t need as much extra funding for transportation or cleaning supplies if they aren’t opening.

New Haven – the state’s largest district, which is offering only remote learning –will get $200,000 less than the district was informed Aug. 21 it would receive. Bridgeport – which is opening for in-person learning — will get $1.1 million more. Norwalk gets an additional $51,335.

Waterbury and Stamford will lose the most with this adjustment, each set to lose just more than $600,00.  Wallingford is getting the largest increase — an extra $1.6 million.

The adjustments were also based on more recent funding requests from districts, said Peter Yazbak, spokesman for state’s education department. The department did not provide the CT Mirror with those funding requests this week despite numerous requests.

“We said we will fully fund everything they’ve requested in terms of masks and other PPE to make sure you can return to school safely,” Lamont said. “We’re going to provide any funding you need for technology to make sure your classes are equipped.”

While some districts are opening for in-person classes, he added, others — like New Haven — are not, which presents different challenges.

“So there’ll be some money following the children because some kids are going to go to another school district or magnet school in another town if they can’t go to school in their hometown,” Lamont said.

The adjustments are being made to $130.8 million that will soon be doled out by the state Department of Education – far short of the $420 million districts told the state in mid-July they will need to open schools. Some of the gap may be covered with any funding left over from the $100 million in federal funds districts received last school year to help switch to remote instruction when schools abruptly shut down.

While six of the state’s 10 lowest-performing “Opportunity Districts” will receive less with the adjustment, they will collectively receive $44.5 million – 34% of the funding awarded, despite being responsible for educating just 20% of Connecticut’s public school students.