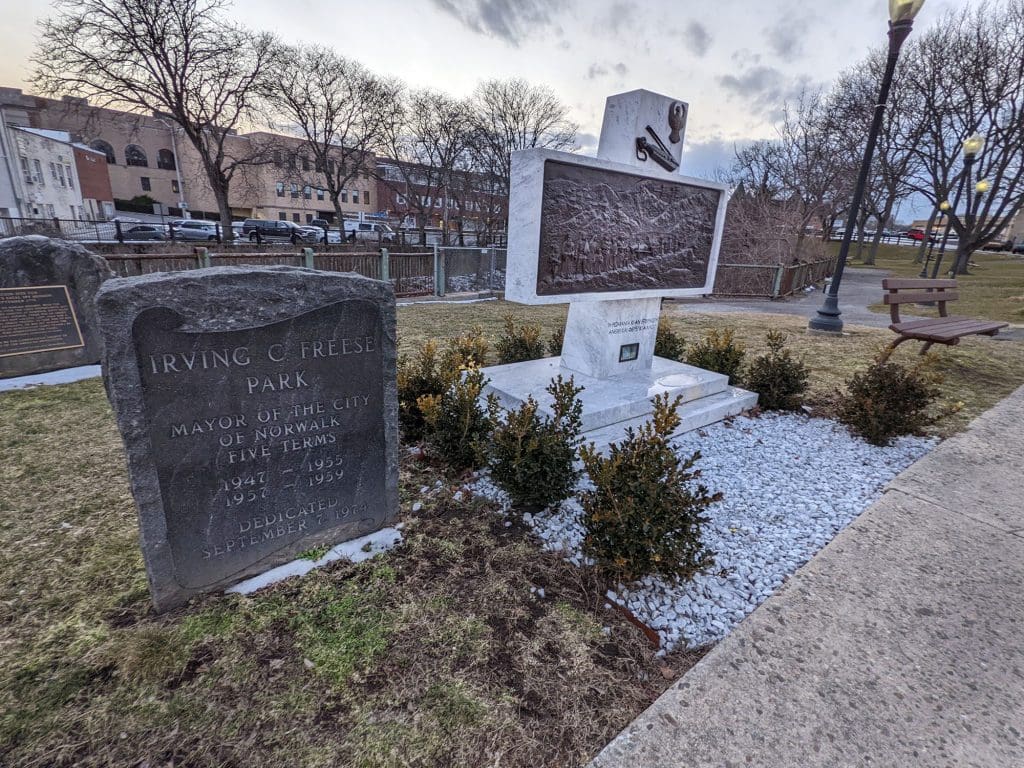 Irving Freese Park in February. The recently-installed monument at right is the Pontian Genocide Memorial, a work by sculptor George Kikotis and funded by the Pontian Community of Norwalk.

NORWALK, Conn. — Norwalk’s parks are set for another boost – $4.5 million in State funding.

The State Bond Commission is poised to approve a $4.5 million “grant-in-aid to the Town of Norwalk Park System for improvements to several town parks” at its Friday meeting. This comes on the heels of Norwalk announcing a plan to spend $2 million in American Rescue Plan Act (ARPA) funding on parks.

“Mayor Rilling applauds Governor Lamont and Senator Duff for their commitment to bringing funding to the City of Norwalk’s Park System through grant funding from the State Bond Commission.

“This funding would beautify our landscapes and upgrade several of our sports fields. It would provide additional funding for the Broad River Synthetic Field baseball complex’s design and improve park amenities at Irving Freese Park.

“Finally, we are grateful that this funding prioritizes the City’s sustainability and beautification initiatives by enhancing our recycling and garbage efforts at our Parks. This includes replacing our garbage receptacle system with a uniformed can system and adding in-ground cans and equipment at all our Regional Parks: Veterans Park, Calf Pasture Beach, Cranbury Park, Oyster Shell Park, Fodor Farm, and Taylor Farm Dog Park.”

The Broad River baseball complex has been an issue for years. It’s Norwalk Little League’s primary baseball field but there are no restrooms and no concession stands, then-Little League President Dan Balliett said in 2018, adding that there are only two porta potties for the 400 players who use the facility during the season.

Design for a new complex was funded with $95,000 in the 2019-20 capital budget but Norwalk Recreation and Parks Director Robert Stowers said in April that the $2.5 million estimated to do the work is “not enough” and “we need to reassess this project.”

The State Bond Commission is expected to approve $34 million in funding that will continue Gov. Ned Lamont’s “priority of improving and increasing access to the outdoors for Connecticut residents in a number of ways,” a news release said.

The news release sums this up as:

“In Norwalk, the City and residents value our parks, green spaces, and incredible beaches, and the $2 million in ARPA funds going towards Norwalk’s Recreation and Parks Department compliments {cq} the potential funding from the State Bond Commission. The $2 million in ARPA funding is critical for helping our Department of Recreation and Parks keep up with and expand our parks and recreation services. This funding is going towards enhancing our playgrounds, improving field maintenance and modernizing our parks and recreation systems. Enhancements towards our playgrounds include replacing equipment at Bouton Park, Flax Hill Parks, and Kendell Playfields {cq} and a complete redesign and installation of playground equipment at Meadow Street Park Playground.  The funding will also improve our field maintenance by providing new equipment for synthetic fields and supporting additional staff hours to complete maintenance of our fields and facilities.”

The investment funding comes ahead of the City approving a new Parks Master Plan.

Then-Director of Recreation and Parks Nick Roberts initiated a master plan process in September 2019 and the Common Council approved $249,975 for a consultant to lead the effort.

It had been nearly 20 years since the last parks master plan, Recreation and Parks Committee Chairwoman Darlene Young (D-District B) said in 2019. The City’s website offers a master plan from 1996.

The effort stalled due to COVID and “the uncertainty of how to handle the public meetings and things like that,” Roberts said in April 2021. The Council subsequently approved a contract with White Plains-based engineering consultants Kimley-Horn.

Outreach began in February and Stowers, who became Director in September, told Common Council members that he expected to have a draft for public review “by fall.”

A “deep engagement” with the community will help the City “get really a handle on what people really want for their recreation in Norwalk,” from facilities to parks, “the programmatic end of things” and “what kind of sports we want,” Stowers said. He predicted a “pretty comprehensive” plan derived from the feedback.

Woods Mathews said Wednesday, “We are on track to have a draft of the Master Plan in November.”

Spending $3 million or more on Broad River Baseball Fields would be a joke. As much as I love baseball the fact of the matter is interest at the youth level does NOT warrant that kind of funding. The money can be better allocated in 20 different ways..Nice facade for Dems to campaign off of though. AND it is a facade.

Nice but no monies for our largest park – Cranberry – that’s being slowly destroyed with overuse with bikes and motorcycles on the trials, packs of running dogs, celebrations, etc. What used to be one of Fairfield County’s best virgin growth parks is now suitable only in the off hours. Weekends in the summer the loud boom boxes reverberate long distances. Wildlife that made Cranberry their home for untold generations – turkey, deer, coyotes, beavers, etc. are all gone. Cranberry is a now a “Party Park”. Even the waterfowl have gotten the message with the “boom boom”. Cranberry has one of the largest uncut virgin forests in the County. Won’t be long now before hunting season begins with shotguns barking in the evening hours. A resident naturalist or even a patrol car would be helpful. Dream on.

I sort of agree with you Pibernan however, Cranberry Park was always the “party” park when I grew up.

There and the beach. The police department liked it that way. All us kids hung out in the two best parks around and they kept an eye on everyone. There was very little trouble as there was give and take on both side.

Not so much any more these days.

Great point John. Duff and company continue to take credit where credit isn’t due!
Let’s spend OUR tax $$$ wisely! To spend so much on one baseball field isn’t smart. But look who’s managing OUR TAX $$$….

My wife and I walk in Cranbury at least 4 or 5 times a week with out 7 yr old golden retriever. I’d be happy to have Pilberman join us. In the 100 or so times we’ve been to Cranbury we’ve once seen a mountain biker- who was totally courteous and with her dog. We’ve run into a host of disc golf players, never heard or saw a motorcycle. Had a large deer crossing our path just yesterday and generally walk by a a dozen or so people in the 45 minute to 1 hour walk. We love Cranbury and not sure when or where Piliberman has gone there and had a bad experience, but in 15 years living in Norwalk, we’ve always had a good and peaceful time. As for grants, Cranbury recently received a significant grant. Sadly some see only grey skies and 1/2 empty glasses— https://www.ctpublic.org/news/2021-12-20/6-2-million-in-state-funding-coming-to-norwalk

I’ve been a steady hiker in Cranberry Park for 20 plus years. And I do not often hear a lot of boom boxes except on weekends. In the past few years the park received extensive improvements to the landscape
around the main area green which definitely upgraded the overall appearance. However, I agree there is very little wildlife to be found along the trails, but it isnt entirely based on human interference. Perhaps, a little more research into how to improve wildlife habitats should be done before anyone starts pointing fingers. I would also like to see more regular park supervision, and paid naturalists offering educational and social activities. During the week, I actually wish I would see more people taking advantage of all the beautiful sites this park has to offer.

Seems we waste a lot of valuable tax payer money on foolish things that rank very, very low on a scale of social importance. Projects that serve few and in reality are nothing more that nice to have and make someone feel warm & fuzzy. Unfortunately the overwhelming majority of our decision making politicians have no experience in how to make a dollar, but yet are allowed to decide on how to spend it.

Who will get a say in what the “improvements” are? I picture City Hall deciding to “grant” space for profitable crap like ice skating rinks under the guise of improvement. Most of you readers know that’s not a made up random examples. What if they make “improvements” without residents of Norwalk inputs? Our City Hall officials and their shadowy offshoot agencies (think “Redevelopment”) do not have our best interest at heart. Their motives are rarely meant to help residents of Norwalk. So who gets to say WHAT the improvements will be?