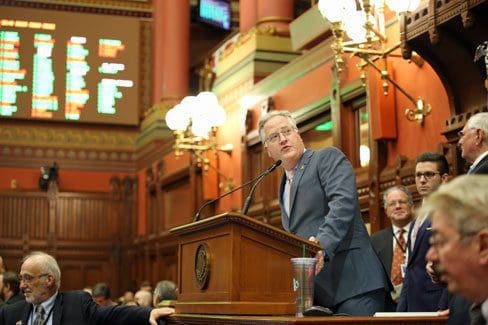 NORWALK, Conn. – Norwalk is facing a state aid hit of $2.1 million if the current Democratic budget proposal is passed intact, according to information passed by Board of Education Chairman Mike Lyons to NancyOnNorwalk Wednesday night.

The $2.1M does not include the potential loss of Priority School District money.

According to, an accompanying spread sheet, Norwalk stands to lose $57.8 thousand from its Educational Cost Sharing (ECS) funds.

“We’re back to losing money on ECS, as well as in many other categories of general city aid and school aid, Lyons wrote in an email.  “This is the budget the governor and Democratic leadership agreed on. The leadership has put this off to a special session to vote on, so it may be subject to more change.  But right now we’re taking a real hit.”

The biggest hit is in the Municipal Revenue Sharing Account (MRSA) funds: $1.5 million. Among other cuts is $473K in PILOT (Property In Lieu Of Taxes) funds

The information came too late to get a comment from Mayor Harry Rilling or other city officials, but, on May 2, Rilling said he expected the nearly $5 million in MRSA funding would remain almost intact.

The General Assembly was scheduled to adjourn at midnight Wednesday without adjusting the 2017 budget, but legislative leaders promised to return, possibly as soon as next week, to balance it.

Lawmakers didn’t have a copy of the budget online or in their hands as of 7 p.m. Wednesday. They only had unofficial spreadsheets and revenue estimates.

“As a matter of democracy and fairness to all the members of the House, it is not possible to do a budget this evening,” House Speaker Brendan Sharkey (D-Hamden) and House Majority Leader Joe Aresimowicz (D-Berlin) said in a statement at 5:30 p.m. Wednesday.

The statement came as the House Democratic majority caucused the budget, which seeks to close $960 million revenue shortfall with $830 million in spending cuts and about $136 million in revenue changes.

“The time it took to reach an agreement, combined with the challenge of staff to physically get a printed bill to the floor, and then achieve passage, would likely require a cutoff of discussions,” Sharkey and Aresimowicz said. “That scenario would not be fair for the purpose of allowing a complete and reasonable debate, and at this point would be a disservice to House members and the public they represent to move forward tonight (Wednesday).”

“The information I have received does not indicate the cuts will be as high as $2.1 million,” Common Council Finance Committee Chairman Bruce Kimmel (D-At Large) said in a Thursday email. “The situation is still fluid and all types of conjectures have been bandied about. The important point is that the city has a plan in place to handle whatever comes our way, fiscally speaking.”

Has anyone explained, in coherent, plain common language, details why there is nearly a billion dollar shortfall? Anyone have a link? Miscalculations? Misinterpretations? Wishful, creative accounting? A revenue shortfall of a billion, with a B? That’s allot of cookies missing from the cookie jar, is it not?

@Grammy, in part when the federal government passed Obamacare and raised the long term capital gains rate on top filers from 15% to 23.9% at the federal level, our state legislature assumed they would gain more revenues from this from our top earners. Then our economically illiterate legislative leadership went on a spending spree like the money was already in the bank. This has been going on for a few years now, but now they can’t hide the facts and all the spending has caught up to us.

What happened instead on the revenue side is that taxpayers subject to those 60% increases in tax rates instead decided to keep their gains in the market waiting it out for eventual repeal of these. Some who did take gains offset them with losses as any financial planner can tell you is smart. Many moved to states with 0% income taxes so they could save 7% from the state’s grab.

The bottom line is when you tax more of something, you get less of it. This is economic reality. But again, the real problems are a result of runaway spending on things we didn’t need and could not afford like 12% raises for political appointees, 50% tax cut for retired teachers, being a sanctuary state, and scores of stupid projects like the $600 million busway that benefits less than 1/10th of 1% of the population.

I could go on, but if you and the rest of us can get this picture and what is wrong with it, maybe there is hope for the state before the legislature drains the sound and sell off all the parks.

So now since Danny Boy and his Democratic Buddies decided to try and construct a budget all on there own Norwalk is taking a DOUBLE HIT! So where is our Democratic representatives standing up for us?!

Bryan from what I can understand of you explanation, taxes were raised on, essentially, stock profits for investors and assumptions were made based on anticipated revenues. And tax cheaters and corporations are basically looking for any and all loopholes to not pay their fair share. Like using offshore island accounts to hide their cash with untraceable hidden shell llc’s and buying condo’s in Florida than renting them out but using the leased condo’s as a primary address to escape the actual home state taxes.

Isn’t it time yet. to crack down on all these tax thieves/cheaters that are robbing from all of us. Robbing from our schools, our hospitals our roads our badly outdated infrastructure?

With that information/history in mind, does 29% on $500,000 seem outrageous? Low income residents with HUD assistance pay 30% of their measly income for the basic human need of housing. Why cant folks and corporations that are doing really really well pay their fair share?
Why cant we make them?

Another interesting figure in this data base, supplied by; taxfoundation.org, is – minimum wage,(the bottom of the food chain), income tax has remained the same since 1989 at 15% while wages have not substantially increased with the cost of living and inflation.

Your dollar buys less, allot less than it did 30 years ago but wages have remained flat.

Thus, the have nots, now have allot less to eat at dinner time, and those new shoes for work, forget it.

All figures are adjusted to today’s dollars for married filing jointly.

Corporate tax rates are another discussion but one we all should have and soon. Too many shenanigans carrying on and shysters outright stealing and getting away with it all.

So long story short, as it appears; the system is rigged against average hard working, law abiding, citizens and favors clever crooks that manipulate and profit immensely on our broken, unfair, unjust systems.

And in this supposed democracy of ours, why do we let this continue?

Not to worry! We have Bob Duff looking out for Norwalk.