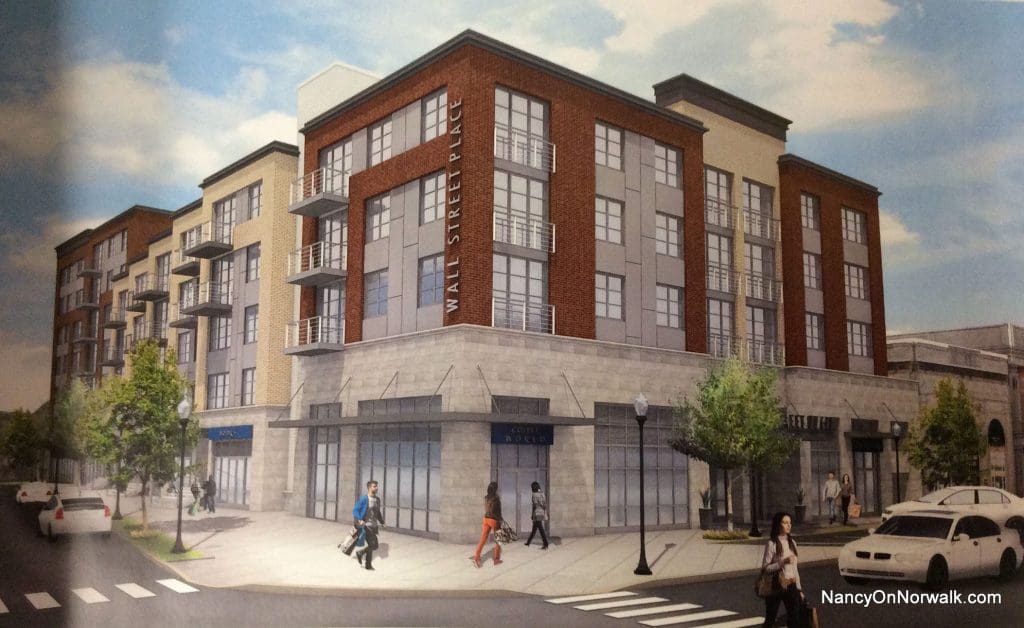 A 2015 rendering of the planned Wall Street Place.

The tax credits accounted for $9 million of  the stalled development’s $49 million construction budget.  Work on the project, known to many as “POKO”, stalled in 2016 and has not restarted, leaving a partially-built structure on Wall Street, instead of the planned 101 apartments, of which 36% would have been affordable housing.

To real estate broker Jason Milligan, the loss is good news.  Milligan provided NancyOnNorwalk with a Nov. 19 letter from the Connecticut Housing Finance Authority (CHFA) confirming cancellation of the credits.

“If they lose the tax credits … then Citibank {sells the project to the} highest bidder. Then they’re not going to do this type of project,” Milligan said last week.

Citibank, which financed the project with a $31.9 million construction loan, foreclosed on the original developer, IWSR Owners LLC, and currently owns the property.

Mayor Harry Rilling, Redevelopment Agency Executive Director Tim Sheehan, other City officials and Citibank representatives did not reply to a Tuesday email asking what the loss of the tax credits means for Wall Street Place.

The City has put Citibank into default of the Land Disposition Agreement due to the condition of the property and because construction has not restarted. A mediation session is scheduled for Dec. 13.

“The City’s focus is getting Phase 1 completed. This is of upmost importance and has been made clear to Citibank,” Rilling said in a statement released Monday to NancyOnNorwalk by Communications Manager Josh Morgan. “Attached is a set of letters, the most recent denying an extension for Citibank and requesting mediation. That process is ongoing and we are hopeful for a positive resolution in the coming weeks.”

Citibank rep Jeremy Johnson in a July email to Milligan said that the tax credits would be necessary for the project to be viable. The context of that involved getting tax credits for Wall Street Place phase II, as Milligan was negotiating a possible sale of two of his phase II properties.

The funding stack for “POKO” included:

The project’s construction halted due to a budget gap identified as $9,853,181 in Citibank’s August 2016 default letter to IWSR Owners LLC, a POKO entity. The tax credit deficit added to the known budget gap equals $18.5 million.

Milligan recently shared with NancyOnNorwalk a plan developed by John and Todd McClutchy in conjunction with Citibank to restart construction; the McClutchys hoped to use the former municipal parking lot now owned by Milligan, and an adjacent POKO property under Milligan’s control, to build Phase II and make up for the deficit in parking on Phase I.

Milligan agreed to sell 21 and 23 Isaac St, the POKO properties desired by McClutchy, to the developer at what he called a “breakeven price” plus costs of $25,000 a month, but balked when he was served with the City/RDA lawsuit and demanded that it be withdrawn.

He had pitched an alternative idea: McClutchy would build Phase I “as is,” with just the 70 apartments that had been framed, without the percentage of affordable housing mandated by the tax credits.

“Remove the deck for the unbuilt apartment portion, delete the two retail spaces and enormous lobby under the deck from the plan. Put 50 +/- surface parking spaces instead of 16. All 50 would be dedicated to your retail and your residents,” he wrote.

He would sell McClutchy nighttime and weekend parking rights in his lot, he said.

“This option would be a quick hitter. It would sail through approvals given the public parking component. The area stakeholders would support it as would the taxpayers at large. You could stabilize the project and flip it to a fund instead of hanging around 10-15 years,” Milligan wrote. “You also don’t have to build any parking. If you want dedicated then you can buy extra from me.”

Steven Hall, Managing Director of Citi Community Development Finance and Investments, replied that the cost of the requested infrastructure improvements needed to be spread out over more than 70 apartments. Citi Community Capital (CCC) wouldn’t finance the project as Milligan described because “it is well outside of our mandate,” he wrote.

CCC states on its website that it aims to help “affordable housing developers construct, rehabilitate, refinance, and acquire affordable multifamily housing across the country.”

Citibank ran the numbers on the project with less units and “no federal, state or local support” and found that it wouldn’t work, Jeremy Johnson, Managing Director of Municipal Financial Products at Citigroup, wrote to Milligan.

“I feel strongly that many of your assumptions are flawed and, in some cases, dead wrong. If you are using garbage input you will get garbage output,” Milligan replied.  Johnson answered: “I can tell you this with absolute certainty – we are incredibly realistic in both our expectations and assumptions.”

Is this what you realistically expected and assumed would be happening right about now?

If not, it might be time to either cut bait & sell the project or start listening to someone with a little more local knowledge and insight.

Your track record in Norwalk is less than steller. Your credibility with people is gone. I recommend getting the hell out of here.

Too many moving parts. I understand that (at the time) several on the common council said this project was not financially stable or feasible… and that was only for Phase I of the entire Wall St. project. They were right. Who knows what lurks in the wording of the Phase II and III LDA shadows?

Sorry for the baseball analogy, but singles and doubles will move Norwalk’s land use forward – not these gigantic, low probability, over engineered attempts at grand slams. At the moment, we do not have the real estate expertise to know when we are being snookered.

City Hall needs to pursue CitiBank and its team, who aided in the crafting of this financial calamity with the same vigor it’s pursuing Mr. Milligan, who from my perspective seems guilty of only picking up the pieces, when this project blew up.

Lisa is right. It was obvious to me and others who consistently voted against the project that there was no way it could succeed. Other members who didn’t want to stand up or fell victim to political pressure simply voted for it mindlessly in some cases.

So is it safe to assume that the Tyvek Tower will just stand and rot away for the forceable future!?!? Thank God its an Election Year in Norwalk…If anyone does think its time for REAL Change then I’m not sure what you are waiting for. We screwed up Hartford with electing the same people. Let’s not screw up Norwalk more. VOTE LISA!

What’s frightening is that this is now subject to arbitration. You think having City officisals plan a project is nuts? Now a single trained mediator will be making decisions for this area.

Anyone else wonder why do we as taxpayers receive more solid information from Milligan then these voter elected leaders?

This is a call for more transparency and if not step aside bc it’s been horribly mismanaged for way to long.

Norwalk city hall keeps wasting our tax dollars and they get voted back in, so who is the fool. Where is my tax credit I made my house affordable for my children to live rent free until they turn 18. The homeowners just pay for the mistakes made by city government over and over yet we vote for status quo. I don’t get it.

The city should declare eminent domain and take the parking lot property back at minimum.

demolish the catastrophe and plant some grass and put the parking lot back.

I agree with Bob Partisan. Tear the thing down and create more green space in down town.

Debora Goldstein: that very disturbing aspect of the matter hadn’t occurred to me.

On the other hand, the people who think that City Governments and Redeveloping Agencies are better suited to develop property than property owners might see this as a bonus. For them, I imagine that a trained arbiter would just adding more central planning goodness to the project.

In the Soviet Union, the response to a factory or organization not meeting its Five-year Plan was always to add more Party Cadre to oversee the next Five-year plan.

Touché. But then voters who think City Govt and Redevelopment Agencies aren’t qualified to design redevelopment areas should stop their government from declaring areas “slums” and applying for HUD oversight just to get HUD money from the federal govt.

Believe it or not, HUD oversees some pretty good redevelopment in other cities. It’s only Norwalk who seeks to rebuild housing for the most vulnerable in flood zones, and fails to put appropriate contract clauses in to take back a project when a developer misses deadlines and fails to meet its most basic obligations OVER and OVER and OVER and OVER.

Start from page four of these search results for a lovely timeline:

Here’s a fun photo from Nancy’s excellent reporting on POKO, circa Sept 2014

Then there’s this gem.

We needed to bolster our petition to sue the developer by giving him an extension. Then, when he blew the deadline, we didn’t sue. Here we are more than 4 years later…

You can’t make this stuff up!

This is what was promised:
https://www.nancyonnorwalk.com/2017/11/rilling-im-a-consensus-builder/

This is what we saw:
https://www.nancyonnorwalk.com/2017/06/rilling-campaign-attracts-out-of-town-russian-cash/

So guess what happened:
https://www.nancyonnorwalk.com/2017/07/norwalk-council-members-consider-tax-incentives-for-developers/

Anyone care to listen now?
https://www.nancyonnorwalk.com/2018/09/norwalk-rtc-leader-alleges-perception-of-pay-to-play/

Mayor Rilling – Hope is NOT a plan!

Take it over by eminent domain, tear it down, and plant grass??? Exactly how much tax revenue would that bring in every year?

The only hope is to lay out the situation in front of those voters who (1) lack knowledge of Norwalk’s faulty governance and who (2) simply vote Democratic because they hate Trump.

No one else will vote at all. They don’t know and don’t care.

This problem exists nationwide, and will ultimately cause the destruction of American democracy. U.S voter turnout is lower than that of most other developed nations.