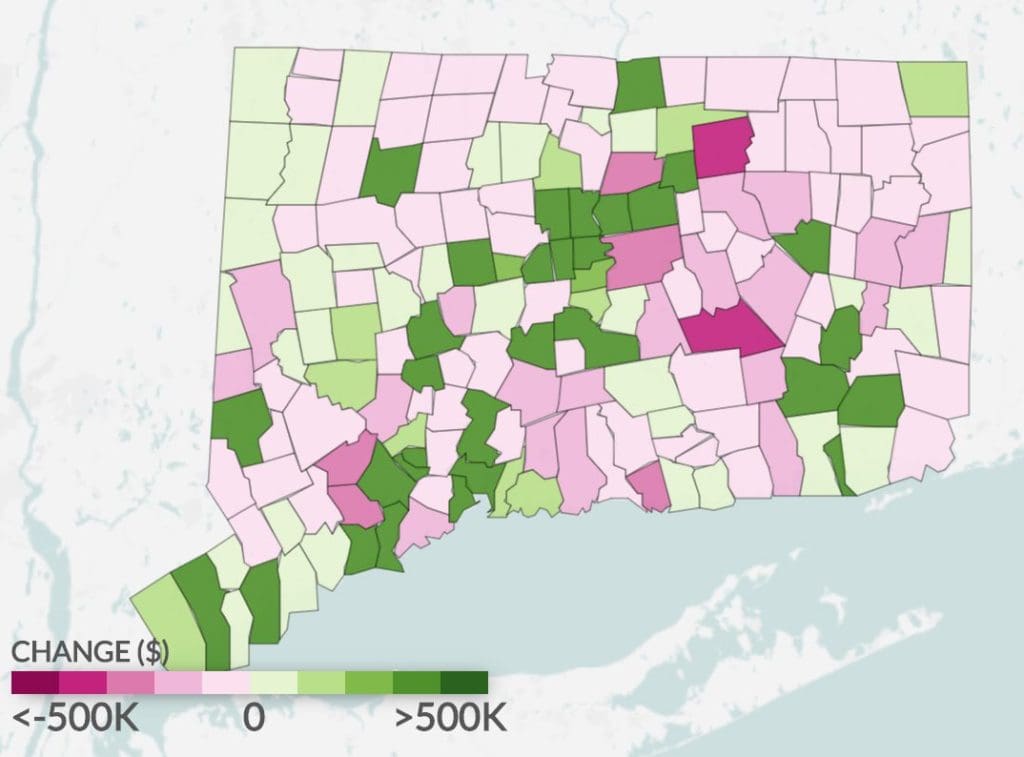 A CT Mirror graphic on the biennial state budget. “In a sea of pink and red, Norwalk is solidly dark green,” Board of Education member Barbara Meyer-Mitchell wrote Wednesday. “Our funding from the state went up, by $543,094, mostly in education funding due to the new ECS formula phase in. Should we keep working for more? Yes! But are we being poorly represented in the General Assembly? This data says we are in fact doing well in comparison to other municipalities across the state.”

NORWALK, Conn. — Norwalk is getting a 3% increase in state funding for 2019-20, according to the Connecticut Mirror. Stamford is getting a 7% increase.

Board of Education member Barbara Meyer-Mitchell, in a Facebook post, attributed the funding changes to changes made last year in the Educational Cost Sharing formula. That Facebook post quickly became contentious, as other BoE members and unaffiliated Mayoral candidate Lisa Brinton attacked her positive view of the changes.

“This data says we are in fact doing well in comparison to other municipalities across the state,” Meyer-Mitchell wrote.

The Connecticut School Finance Project shows that Norwalk is getting an additional $495,667 in school funding from the state this year, via the reworked Educational Cost Sharing (ECS) formula. Stamford is getting $1,079,694 more.

State Senate Majority Leader Bob Duff (D-25) did not reply to a Wednesday email from NancyOnNorwalk, asking for perspective on the funding statistics.

“One reason for the difference in grant amounts is likely relatively simple. Stamford and New Haven school districts have more kids.

“As for why there are differences among the grant amounts that each town receives, despite the new ECS funding formula that passed last year and went into effect in 2019, CT still has 10 different education funding formulas. Additionally, districts have their own grand lists, population needs and proportions of higher-need students. These inputs also impact how much school districts receive.”

Meyer-Mitchell responded to Brinton’s curt comment by writing, “I know you are busy campaigning, but I would hope a mayoral candidate might be slightly more issue oriented and informational, not to mention less rude.”

“.27%,” Meyer-Mitchell replied. “What I am suggesting is that if you comment on something a constituent says, you may want to be more thorough and diplomatic in your presentation of your opinion. I know from reading your ECS testimony that you also advocated for a 30/70 formula, so we were aligned on that. Frankly, I was nervous that we would see more cuts at the municipal level, so I am grateful.”

Brinton testified at a March 2017 House public hearing on proposed changes to ECS. According to the State’s website, she said:

“Norwalk is one of the cities that suffers because of our inflated property values because of our location and surrounding wealthy towns. We want our fair share. This has been a fight for too many years and if this change doesn’t happen now, you can bet it’s never going to happen.”

Mayor Harry Rilling did not testify. He traveled to Hartford but had to leave before he got the chance, he said at the time.

BoE member Bryan Meek, Brinton’s campaign treasurer, in the Facebook thread accused Meyer-Mitchell of “always campaigning… mostly for folks who are going to throw you on the political scrap heap once you are done being useful.”

“Just to put the extra $500k and change in perspective….. The City of Norwalk generates about the same amount in tax revenues every 8 hours for Hartford,” Meek wrote. “Every 8 hours, 3x a day, for 365 days. For another comparison, this amount of money funds school operations for about 1/2 of one day out of 182. Let’s celebrate!”

“There is plenty we can debate about ECS,” Perone wrote in the Facebook convo. “The plain truth is that this is a brand new funding formula that is going to be phased in over 10 years. We should all be paying attention to how the formula effects Norwalk as it rolls out. Myself along with the rest of the Norwalk delegation are committed to making sure that Norwalk receives its fair share under this new formula.”

“You are kidding us, right? We are not even close,” BoE Chairman Mike Barbis wrote. “And trying to pretend that these are increases are meaningful — when they don’t even beat the rate of inflation — is disingenuous. You are insulting us all”

“Actually, as I commented at the time, inflation is 1.9%, and our increases over the next couple years are ~5%. When Norwalk mobilized to support a change to the ECS formula I don’t recall your writing testimony, but the ask was a 70/30 formula with attention to poverty and ELL,” Meyer-Mitchell replied. “What alternate formula do you propose that we as a community can get behind and advocate for? Consistently saying we need more but not saying how we get there isn’t very productive.”

“I’m not spinning,” she wrote. “I’m asking for a concrete suggestion of how we could fairly improve our portion. What alternate formula would you propose.”

“here’s the basic formula,” Meek wrote. “Stop carrying water for Duff and others who have shafted Norwalk. The facts are more than clear. Duff has sold this city out for his shiny title and your support of his shenanigans doesn’t help the city. More money is subsidized to the New Britain bus riders than our own children. It’s shameful that you continue to support this.”

I’ve been involved in Norwalk’s ECS fight for nearly a decade – long before considering a mayoral run or Barbara’s election to the BOE. While appreciating her service, financial matters must be put into context, which is what I did. For any Norwalk BOE member of any political stripe to laud what amounts to pennies on the dollar, when considering the revenue Norwalk sends to Hartford, coupled with our changing student demographic is disingenuous.

Our state ECS funding is not keeping pace with our growing student poverty trends. Period.

For more historical context check out the ECS page from:
http://redapplesnorwalk.org/?cat=21

Why does Bryan Meek have to be rude? It’s really unbecoming, and does not reflect positively on him or the candidate that he supports.

Mike Barbis and Lisa Brinton, you both are quite snarky in your posts on FB. It would help if you would remove the snark from your comments.

Sen Duff and his Democratic colleagues ought explain why substantial increases were given wealthy CT towns in the new CT State Budget.. The original purpose of CT school aid was to assist our most needy towns and cities with major underfunding of their public schools. On the surface it doesn’t look like Sen. Duff and our local Democratic colleagues have been “standing up for us” in Hartford as regards ECS.
Is there an explanation ?

Another slap on the face for Norwalk.

Dear legislators (Messrs. Duff and Perrone), if you can’t find a way to treat Norwalk fairly after over a decade of trying in the majority party and leadership, maybe it is time to call it quits! If you can’t change the pesky formula, find the $ some other ways (and not a fraction to appease the few). Norwalkers, both kids and taxpayers, deserve results, not excuses.

Sorry Karen, I’ve been polite and kind for 4 years and its not resonating with some who continue to work against this city, even though in their own mind they are helping. They are not and at some point people need to wake up to reality. The reality is our hard earned money is being funneled out of this city for other irresponsible projects and giveaways that have no benefit to Norwalk whatsoever. It’s legalized thievery and it needs to stop. I suppose your tact might treat people picking your pocket with kindness and that’s your prerogative. Some of us have real skin in the game having lost $100,000s on our real estate investments due to the lack of support that Norwalk deserves. It needs to stop and the constant praises for the very people doing this harm to the city need to stop too.

Kathleen and Karen for the win.

Lisa, I appreciate your leadership as a parent advocate on the ECS issue. Your group raising awareness got me involved in the issue when my eldest started kindergarten. Like many from Norwalk, I attended the ECS task force meeting, with signs and toddlers up way past bedtime. I called and wrote our representatives. I listened to them when they explained the complexity of the situation, and the history of political manipulation of the formula and the difficulty of bringing a solution to the table. ECS was explained to me to be the third rail of politics in Connecticut. I also started to understand the state ecosystem, which has some problematic issues we need to address. Top of that list are three cities that cannot support themselves from revenue raised by property taxes, as a large percentage of their grand list is untaxable. As Education is a state responsibility, there is a duty for the state to support education in communities with less ability to fund themselves. I started reading the statute, studying and following the CCJEF case. When it became clear that the issue would finally be opened and negotiated, and we could possibly get some movement on the issue, Norwalk mobilized to make the case that we were not fairly funded. The community stepped up, writing to ask for a more fair and consistent funding formula. At the time our representatives on both parties told me that a 70/30 property value/median income was the best balance we could hope to have pass the legislature. A great deal of political capital was spent to get this new formula. The ten year phase in was disappointing, but logical. It allowed the state to ensure that no community had a sudden large cut to their funding. Would I like more funding? Of course!!! I think we have opportunity to raise our share of funding by looking at changing the statute regarding excess cost reimbursement (six bills introduced this session), school construction reimbursement (check out this white paper about school construction reimbursement
http://ctschoolfinance.org/reports/comparing-connecticuts-school-construction-program), and direct support for programs. Let’s work together on all of it. Thank you for blazing a trail.

So this poor excuse for “news reporting” boils down to essentially nothing more than an in-depth analysis of a Facebook argument and what a shock, the comment thread here is literally the same. Can someone explain to me how it is possible for this town to have devolved into such petty and divisive online banter and accomplished literally nothing of value for these students? Do-nothing Duff has made fools of you all for years and you keep voting for him for no other reason than he’s a Democrat. Shame on you all.

No mention of the in going time and money SpEd parents go through. the numerous complaints filed, the endless work with education advocates, lawyers and additional services , still can’t get public schools to do their part, required by law. And the state Bureau of Special Education Is basically vacant, unless a paid education atty. is involved. Kinda off tooic, but in topic. Nirwalk needs way more SpEd funding!!