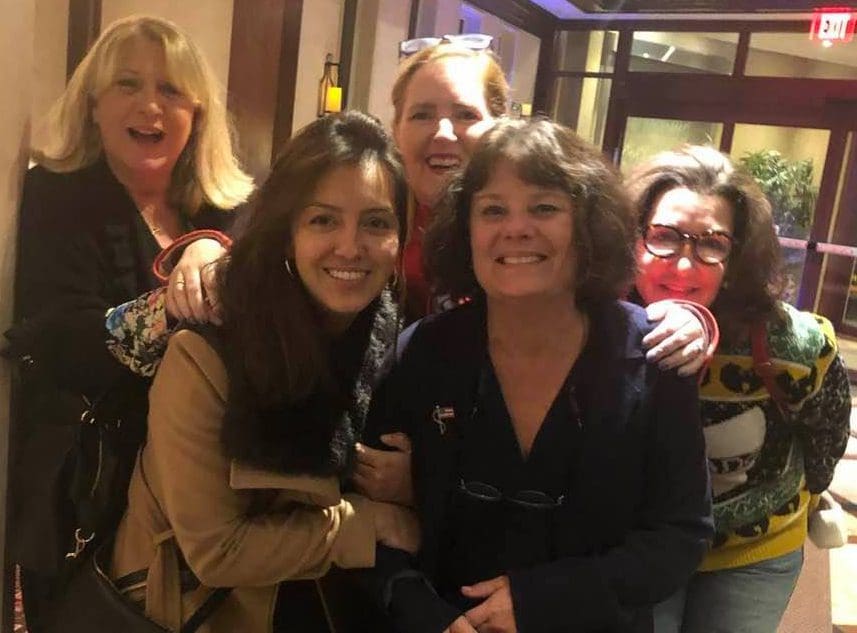 Lisa Brinton with her “posse” close out Election Night 2019 in this photo she posted at the time on Facebook. From left are Isabelle Hargrove, Juanita Olguin, Heather Dunn, Brinton and Donna Smirniotopoulos. Dunn has requested petitions from the State to run as part of Brinton’s new Independents for Norwalk political organization.

NORWALK, Conn. — The State has registered five potential independent candidates for the ballot this fall, as part of Lisa Brinton’s drive to reestablish an independent party here.

All five would need to collect enough signatures on petitions to qualify for the ballot, and need to reach that goal by Aug. 4. Gabe Rosenberg, Communications Director for Connecticut Secretary of the State Denise Merrill, released this list Friday to NancyOnNorwalk:

Brinton has formed Independents for Norwalk as a political organization. Her initial press release didn’t describe what kind of organization it is and there is no political action committee (PAC) listed on the State Elections Enforcement Commission (SEEC) website.

Brinton said last week that she has a “full Board of Education slate and five Common Council candidates” ready to run under the Independents for Norwalk drive. She’s hoping to have 15 total candidates approved.

They’ll need to collect signatures equal to 1% of the total votes cast in the previous election for the office they’re seeking, according to Rosenberg.

Then, “After the election, we’ll be able to form a Town Committee and follow the same nominating process as the other two major parties,” Brinton said.

Dunn, Norwalk Assoc of Silvermine Homeowners (NASH) president, has been close to Brinton for years. She’s a Special Education transition teacher, according to her LinkedIn page. She also volunteers for the Red Cross and as part of the Norwalk Emergency Response Team.

NancyOnNorwalk could find no information online for the other Council candidates.

Meyerson is director of strategic accounts at Everyday Health Group, according to his LinkedIn page.

Great job Lisa, Keep it up!

Finally some candidates that can bring about change and common sense. All candidates with common sense, the ability of getting things done and all that have skin in the game with owning businesses, being community involved or having kids in the school system. Way to go Independent Party of Norwalk. Citizens that actually reflect Norwalk’s beliefs. Candidates who sent their kids or are in the Norwalk school system as well.

Tommy Keagan has and is the CC member District D has ever had! He is beyond committed to this City and public service! No CV member has worked harder, longer hours and given up so much of his time to serve his district and this City! He has been able to work across the table with the majority and is respected by all including the Mayor. He has enormous amounts of knowledge, steady hand makes decisions based on facts, information and not political BS. There is absolutely no reason to change District D’s representation this November with just someone that Lisa put on the ballot. The members need to re-elect Tom Keagan as District D Common Council Member this November. He is the BEST candidate and
Choice!