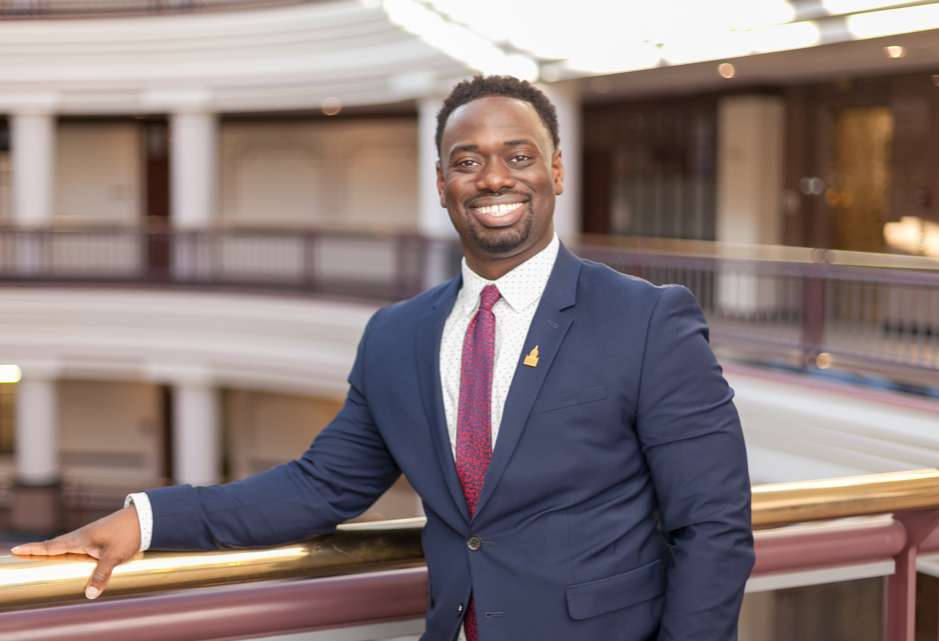 NORWALK, Conn. — A memorial service for State Rep. Quentin “Q” Williams, 39, was held Saturday, after his untimely sudden death just before 1 am. Jan. 5 when the car he was driving was struck by another vehicle going the wrong way on Route 9 in Cromwell.

Though he represented Middletown, Williams’ the pain of his loss is keenly felt in Norwalk.

“‘Q,’ as he’s known, was always very vibrant and charged with energy,” Common Council President Greg Burnett (D-At Large) said Tuesday. “Several may not know that prior to him becoming a State Representative in 2019, Q worked with the Excellence Community Schools, and he hosted a group of Norwalk leaders to tour the Stamford Charter School For Excellence, and coordinated a delegation of Norwalk leaders and residents to present to the Connecticut State Board of Education to advocate for a Charter School of Excellence here in Norwalk. So his presence is not just in Middletown, but he had a very strong footprint here in Norwalk in terms of enhancing the educational experience for Norwalk students…. He will truly be missed.”

The school did not come to fruition, although Mayor Harry Rilling, the Norwalk Board of Education and the Rev. Lindsay Curtis were among the locals expressing support.

Council member Diana Révolus (D-District B) said it had been a “great honor” to work with Williams and she hoped that “maybe in his legacy, we may see the school happen in Norwalk at some point in time.”

All passings are hard but “this one hurt in particularly,” she continued. “I give my greatest condolences to his family. And I hope that his essence continues to remain in in Connecticut, in his area, his district and for all of us. He was a great staple in Stamford for the school of excellence. He fought hard for Norwalk. And I just hope we all continue that passion to make Connecticut that higher of a bar.”

Norwalk Bike/Walk Commission Chairman Tanner Thompson spoke to the Council, mentioning Williams’ “tragic death” and saying he hoped it would be a “wake up call and a note of warning to all of us.”

“About 40,000 People die this way every year in United States, including 300 people every year in Connecticut. That number is rising, and especially rising among pedestrians,” Thompson said. He hoped it would “motivate us to work harder to make our transportation system safer.”

Thompson said, “I firmly believe that diversifying our transportation system is key to that, so that more people have the opportunity to get around, for example, to travel back and forth to Hartford without a car so that we don’t have to take on the risk of of getting behind the wheel and getting on the highway.”

Williams was traveling home after attending the Governor’s Inaugural Ball. He had been sworn in for a third two-year term Jan. 4.

“When wrong way crashes happen, they are often fatal. Over the past several years CTDOT has been installing wrong way driving countermeasures. To augment these efforts CTDOT will launch a wrong way detection pilot program at 16 high-risk ramp locations. Installation will start in 2023,” a State news release said.

The high-risk ramps were chosen via a risk factor assessment of 236 locations.

None of the chosen ramps are in Norwalk or even Fairfield County.

“At each of these locations a 360-degree camera is being installed to detect vehicles driving the wrong way,” the release said. “Once detected, large, flashing, red wrong-way signs are activated to warn the driver of the vehicle that they’re going the wrong way.”

Then-Conn. DOT Commissioner Joe Giulietti said in October that 2022 was “by far the deadliest year in recent memory, with 22 wrong way fatalities occurring on the highways. In fact, 2022 exceeds the number of wrong way fatalities from the previous three years combined. With more than 85% of wrong way drivers found to be impaired, we need people to think twice before getting behind the wheel because one wrong move can be deadly.”

Many of these tragedies could be eliminated if the Connecticut written driver’s test was required to be taken in English. Currently there are at least nine different language options to choose from in taking the written driver’s test. If a person can’t read English what does “Wrong Way” mean to them?

The CT DOT Commissioner noted above that 85% of the wrong way drivers who caused these accidents were impaired. Hearst Media devoted so much space last week to mark the launch of the legal sale of recreational cannabis in Connecticut, I thought they were promoting re-runs of the Cheech and Chong movie, “Up In Smoke.”
If Commissioner Giulietti thinks there were a lot of impaired drivers on our roads in 2022, with the THC levels in modern pot, he hasn’t seen a thing.

And let’s not forget this little probably unknown fact from the Anti Police Bill that was passed and rammed through by Duff & Co and the unfortunate death of the Representative. If a LEO “Observes” you in a manner that may not seem fit to get behind the wheel there is absolutely NOTHING they can do to prevent you from driving. They must first OBSERVE the driver do something un-safe with the car before they can attempt to pull you over. So, in short if they happen to see someone drinking getting stoned then getting into a vehicle there isn’t a thing they can do to stop them. Once though they drive in an “unsafe” manner you know like get on a highway the wrong way and if you think a flashing light is going to stop them..HA! Then the officer can initiate a traffic stop. Isn’t funny what’s in that Anti Police Bill..Thanks Bob & Co.!