Tests could be available as early as Thursday 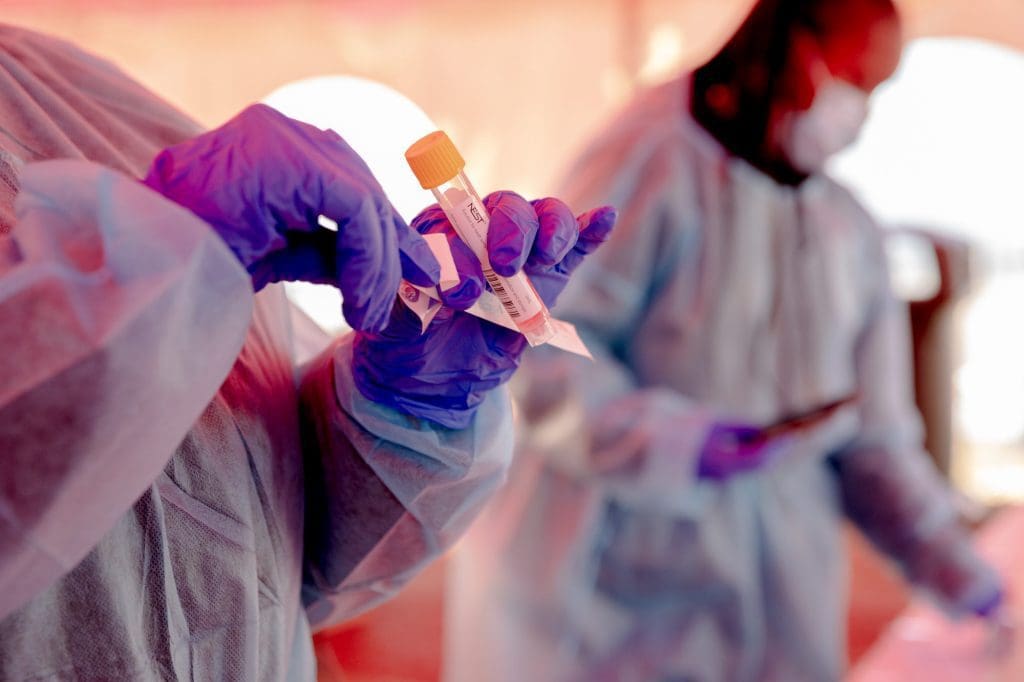 A COVID screener gets ready for a nasal swab testing. (Yehyun Kim, CTMirror.org)

With demand climbing for COVID tests as the omicron variant spreads, Gov. Ned Lamont announced Monday that the state will begin distributing more than 3 million COVID-19 at-home rapid tests and 6 million N95 masks to state residents as early as Thursday.

The first allocation will include the distribution of 500,000 iHealth kits – each containing two tests for a total of 1 million tests – that will be designated for the general public. State officials also are planning to distribute 1 million additional iHealth kits to K-12 schools statewide starting in January.

“Connecticut is currently experiencing another surge in COVID-19 cases that is being driven mostly by the highly transmissible omicron variant,” Lamont said in a press release Monday afternoon. “As a result, the demand for tests has outpaced the supply of testing available through our statewide network of about 400 sites. The week between Christmas and New Year’s Day is likely to be a period of high transmission, and we have to get 2022 off to a good start by helping residents identify COVID-19 quickly and take those steps to isolate appropriately to curb any further spread.”

The number of people hospitalized for COVID-19 in Connecticut increased by 88 to 925 on Monday, Lamont said at a Monday press conference. The state’s positivity  rate increased to 10.7% over recent days. The 7-day average is 9.8%.

The state’s 23 testing sites were overwhelmed in advance of Christmas and are expected to be just as busy heading into New Year’s Day. Last week, about 250,000 tests were reported to the Connecticut Department of Public Health, numbers that haven’t been seen since the earliest months of the pandemic in the spring of 2020.

DPH is in the process of adding seven more community testing sites to its current roster of 23 state-sponsored sites. Information about the state’s 400 COVID-19 testing sites is available by calling 2-1-1 or visiting 211CT.org.

Distribution of the testing kits is scheduled to begin Thursday and is expected to run through the following week. The plan is for the state to deliver the testing kits and masks to local emergency management directors and health directors. Each municipality will handle the actual distribution and establish guidelines for how kits will be distributed — including how many and how often, said Josh Geballe, the state’s chief operating officer.

Local health directors on Monday afternoon received a town-by-town list of how many self-test kits to expect.

East Haven Emergency Management Director Matthew Marcarelli said his community is getting about 3,500 testing kits, some of which he expects to hold onto to be able to test first responders quickly. He estimates that’s about 10% of the town’s total population.

“We’re still working it out, but everybody will have to show proof of residency,” Marcarelli said. “We would ask that only people who have COVID symptoms or who have been in close contact with someone who has tested positive come to pick up tests, but it’s all going to be based on the honor system.”

House Republican Leader Vincent Candelora was critical of the lack of guidance from the state regarding how to distribute the tests.

“I appreciate that the governor has procured these tests, but to make a media announcement like this absent of a concrete plan, particularly as it relates to how they’ll be distributed or even used to keep kids out of quarantine and in their classrooms, will certainly see leaders of cities, towns and school districts wanting more,” Candelora said in a statement. “Leaving local officials scrambling to immediately figure out what steps to take from here seems like a catalyst for confusion, and I really hope the governor and his team give a second thought to offering municipalities much firmer guidance than what was vaguely described during his news conference today.”

The Connecticut Department of Public Health, Connecticut Division of Emergency Management and Homeland Security and Connecticut National Guard will oversee the distribution of the kits to the local emergency management teams.

Geballe said areas with higher populations will be prioritized in the rollout, as will some more vulnerable groups and “populations we know have harder access” — including those in homeless shelters and those who use food banks.

State employees who have opted to take regular COVID tests instead of getting vaccinated will not be able to use the at-home tests to meet the requirement, Geballe said.

And with people taking tests at home and not reporting them to the state, the reported positivity rate will be “a bit of a skewed number,” said Connecticut Public Health Commissioner Dr. Manisha Juthani. “We know our denominator is not going to be accurate because of the self-tests, but it still gives us a reflection.”

The state also will be delivering up to 6 million N95 masks.

“There are three simple and effective interventions to fight off the current surge of COVID-19 from the omicron variant – vaccination, masking, and testing,” Juthani said. “We will be distributing two of these – masks and tests – so that our communities can work as quickly as possible to get past this surge.”

Juthani is encouraging people to limit gathering sizes during this holiday week.

“Because of the scarcity of these kits, I am asking the residents of our state to please take only the kits that you need for your immediate family so that we can distribute as many as possible to help flatten the omicron curve,” Juthani said.

“There is no need to obtain a follow up PCR test. Given the highly infectious nature of the omicron variant, it is most important to wear any mask both in public spaces and when interacting in close contact with individuals outside of your household, but an N95 mask will provide better protection,” she said. “We are distributing enough N95 masks for any Connecticut resident that would like one.”

State officials stress that details of the distribution of the kits and N95 masks are still being finalized and are subject to change this week. Sources said the plan will be to deliver test kits and masks to local emergency health municipalities to handle the distribution.

In addition to those designated for the general public, the state has purchased another 1 million iHealth kits that will be distributed to K-12 schools. Distribution of those kits, which will also include a supply of N95 masks, will begin in January and continue through the school year as supplies last. Planning for this initiative is being conducted in partnership with the Connecticut State Department of Education. More details on the distribution of tests for schools will be announced in early January.

The total cost of the 3 million tests is approximately $18.5 million and will be paid for with federal funds.

Welcome as these long delayed actions are we need pressure Gov.Lamont to remove the billion dollar annual tax on our CT hospital stretched so thin trying to save Covid patients. That our State gov’t taxes hospitals during the most serious Pandemic of modern times is astonishingly insensitive. The tax effectively removes 1/3rd the $3 billion annual donation that individuals and others make to CT hospitals each year.

CT legislators ought visit the Covid ICU Wars of any of our major hospitals, speak to the overwhelmed staffs and then ask themselves if taxing hospitals by a billion dollars annually is an effective way of saving Covid lives. Or whether it is astonishingly insensitive and thoughtless. Why would any well functioning government tax the very institutions dedicated to saving lives in a Pandemic that’s killed almost 10,000 of our citizens ? Especially when substantial numbers of hospital medical staffs themselves have lost their lives saving Covid patients.