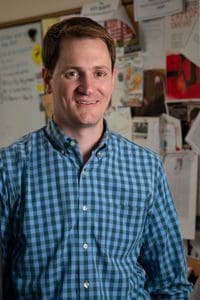 Ken Barone, a Project Manager with the Institute for Municipal and Regional Policy at CCSU. (Contributed)

Police officers pulled over fewer minority drivers relative to whites during traffic stops in 2017, according to a statewide analysis released Tuesday by Central Connecticut State University, but the threshold for which officers searched minority motorists was lower than that for their white counterparts.

“It would appear as though we are making progress in Connecticut and we are heading in the right direction,” Ken Barone, a Project Manager with the Institute for Municipal and Regional Policy at CCSU who worked on the study, told members of the state’s Racial Profiling Prohibition Advisory Board, a 21-member committee established by the legislature in 2012.

But, Barone warned, “it’s cautious good news,” as researchers won’t know if the 2017 data is an outlier or indicative of progress until they analyze traffic stops for 2018.

The study looked at 542,000 traffic stops conducted by 107 law enforcement departments across Connecticut in 2017. Statewide, about 30 percent of drivers who were pulled over that year were minorities. Of those motorists stopped by police, about 16 percent identified as black, and around 14 percent identified as Hispanic. Black and Hispanic residents age 16 and older make up 9.1 and 11.9 percent, respectively, of the state’s population.

“What I hope one of the big takeaways from today is that … for the first time in the four years we’ve been producing these reports, [we] did not identify statistically significant disparities in the rate in which minority motorists were being stopped,” Barone said.

Four municipal police departments and two state police troops were flagged because they had higher racial and ethnic disparities in their traffic stops.

“The previous three reports, we had been identifying anywhere between eight and 12 individual departments,” Barone said. “So I’m hopeful that we’re heading in the right direction.”

Gains aside, Barone noted that there was “strong evidence” minority motorists were treated differently than their white counterparts once they were pulled over, even when they were stopped for the same reason. Minorities were more frequently given a warning for a broad category of stops, but less likely to receive a warning for equipment violations. Minorities were also more likely to be searched for registration, license, seatbelt and cell phone violations.

Police departments statewide were less successful in their searches of minority motorists, Barone said, “which is a potential indicator for disparate treatment.”

Toward the end of his presentation, Barone said the CCSU study is based on comprehensive and rigorous research. CCSU subjects all the departments to the same series of tests, then spends more time and resources on those agencies that are indicated to have disparities in their traffic stops.

Racial Profiling Prohibition Advisory Board Co-chair William Dyson, a former state representative from New Haven, said CCSU’s research and the board’s work are a part of an ongoing conversation about race and policing that is improving the community’s relationship with law enforcement officers. “I feel we’ve started this journey,” Dyson said. “We’re going to hopefully stay on this path to try to answer some questions from people, to have them feel that, somehow, things are getting better.”

The number of people I see talking and texting while driving is ridiculous.

Non Partisan
You forgot to add that most of them talking and texting while driving are the cops themselves.