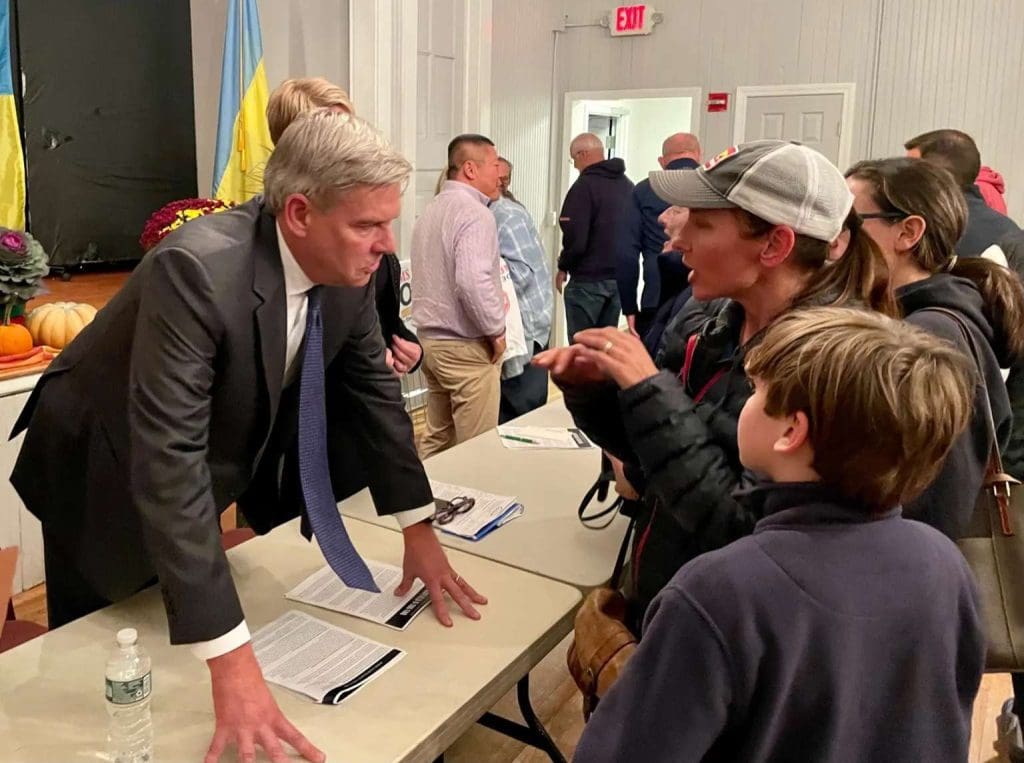 Bob Stefanowski at a campaign event Wednesday where he opposed any COVID-19 vaccine mandate. On Thursday, he challenged Lamont to pledge his opposition. (Mark Pazniokas, CTMirror.org)

Republican Bob Stefanowski made childhood COVID-19 vaccinations a late campaign issue Thursday with a pledge not to require them to attend school and a challenge for Gov. Ned Lamont to make the same promise.

The challenge from the GOP’s gubernatorial nominee comes as a medical advisory committee urged the Centers for Disease Control and Prevention to add the vaccine to the recommended immunization schedule for children and adults.

“I would say our governor has tended to follow CDC guidance,” Stefanowski said. “They’re going to recommend it for the states. I’m saying we’ll go against that recommendation if it is, in fact, to mandate it.”

Lamont said Thursday he sees no reason to mandate vaccinations that he sees as likely to become more akin to annual flu shots, and he called Stefanowski’s challenge an irresponsible politicization of public health policy and procedures.

“I’m not thinking about any new mandates,” Lamont said. “It’s just too politicized right now. And I don’t like the sort of anti-vax tone coming in the political discourse with two weeks to go before an election.”

The Lamont administration has not followed all guidance from the CDC, especially on eligibility for COVID-19 vaccinations. Rather than follow a complex matrix of health factors, Connecticut rolled out the vaccines by age. 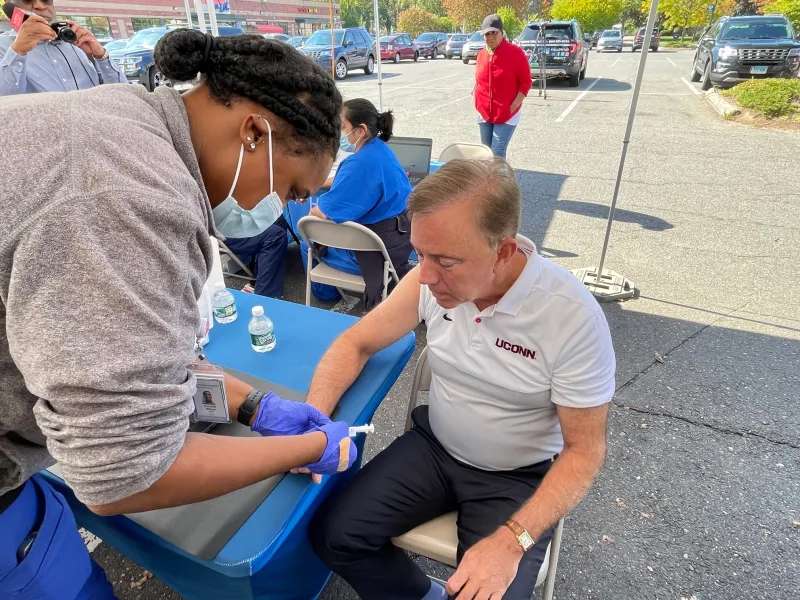 Gov. Ned Lamont got his bivalent COVID booster on Oct. 7, and he urges parents and their children to follow suit when eligible. (Mark Pazniokas, CTMirror.org)

Contrary to a false assertion by Fox News host Tucker Carlson that went viral, the CDC list of recommended immunizations is neither a mandate nor even a list that is fully followed by the states, including Connecticut.

The CDC-recommended immunizations for children include some not required to attend school in Connecticut, such as immunizations against the flu and human papillomavirus, the sexually transmitted virus known as HPV.

By state law, the authority to require school immunizations lies not with the governor but the commissioner of public health, in consultation with pediatricians and epidemiologists, among others.“There are many vaccines that have been recommended. But not all are part of our Connecticut regulations in terms of vaccines required for school,” said Dr. Manisha Juthani, the commissioner of public health.

A year ago, Juthani told CT Mirror she favored requiring school children to be vaccinated against COVID some time “down the line,” after the Food and Drug Administration fully approve their use for children.

“We need to see approvals for some of these vaccines, and I need to see where things land,” she said then.

The list is not lightly changed, and revisions often come years after CDC recommendations. The last addition came a decade ago, when students were required to get two doses of a Hepatitis A vaccine, Juthani said in an interview Thursday.

The CDC added that vaccine to its list of recommended childhood immunizations six years earlier.

“The general principles that have been followed are that, first of all, there needs to be full licensure of a vaccine,” said Juthani, an infectious disease specialist. “There needs to be high parental and physician acceptance of the vaccine. We want to make sure the vaccine is very broadly available.”

As a result, she said, making a vaccine mandatory can take a decade or more.

Two doses of the vaccine against mumps and rubella were a CDC recommendation for 13 years before Connecticut required them in 2011, Juthani said. The same year, Connecticut mandated two doses of the chicken pox vaccine recommended four years earlier.

Like Lamont, the commissioner anticipated that COVID immunizations will become annual events. None of the vaccinations required to attend school require annual shots.

“My suspicion or hope is that for COVID it would be recommended most likely on an annual basis and that we would follow a similar trend to what we do for flu,” she said.

Under his emergency powers, Lamont ordered in 2021 that school employees and many state employees either be vaccinated against COVID or tested weekly. State hospital employees could not opt out by testing.

Stefanowski criticized Lamont for that executive order, and he and the governor also split on another vaccine issue: Whether children can be exempted from required immunizations by claiming a religious object.

Stefanowski has sought the support of vaccine skeptics, siding with Connecticut Residents Against Medical Mandates, a group founded by parents opposed to childhood immunizations as a condition of attending school.

For $6.25, the group is selling a magnetized bumper sticker that claims, “If Lamont is re-elected there will be a COVID-19 vaccine mandate for K-12 education.”

Lamont said there is no reason to even discuss requiring the childhood COVID vaccines, which still are offered under an emergency authorization.

“I think it’s totally premature. And what I’ve said is absolutely not. It’s an emergency use authorization. I urge people to do it, though. I think it makes really good sense. You know, our children’s hospitals are filling up with respiratory cases for young kids right now. But I have no anticipation of any new mandates.”

Stefanowski said he interprets that as Lamont being open to a mandate at some point.

Stefanowski and his running mate, Laura Devlin, have embraced the freedom-of-choice aspects of the anti-vaccine movement, while trying to distance themselves from the elements that attack the safety and efficacy of vaccines.

“I believe in the efficacy of vaccines. I’ve got the vaccine. My kids have the vaccine. I’ve got the booster. I think you do as well,” he said, nodding towards Devlin, a former employee of Pfizer, a COVID vaccine manufacturer. “But we don’t think it should be forced, forced on kids, forced on public employees. It’s up to the person. They should have the choice.”

Stefanowski made his anti-mandate challenge at a press conference.

In an interview later Thursday, he clarified that his pledge to prevent a public-health commissioner from imposing a COVID vaccination mandate for schools was limited to the current COVID variant and its level of risk to children.

“Well, I’m always going to do what’s right to protect kids in schools, but the question is the virus today,” he said.

Stefanowski said mandating immunization against a future COVID variant deemed especially dangerous to children was outside his pledge.

“That would be a new virus to me,” he said. “The virus today, I’m not going to mandate [a vaccination for] it.”

Another reason not to vote for him.

Is it Dr. Stefanowski now? Talk of pandering- what a ridiculous statement.

Thank You Gov Stefownowski! Thank You for looking out for our children.

Thank you for standing up for peoples medical choice and freedoms. Vaccine mandates are unconstitutional.