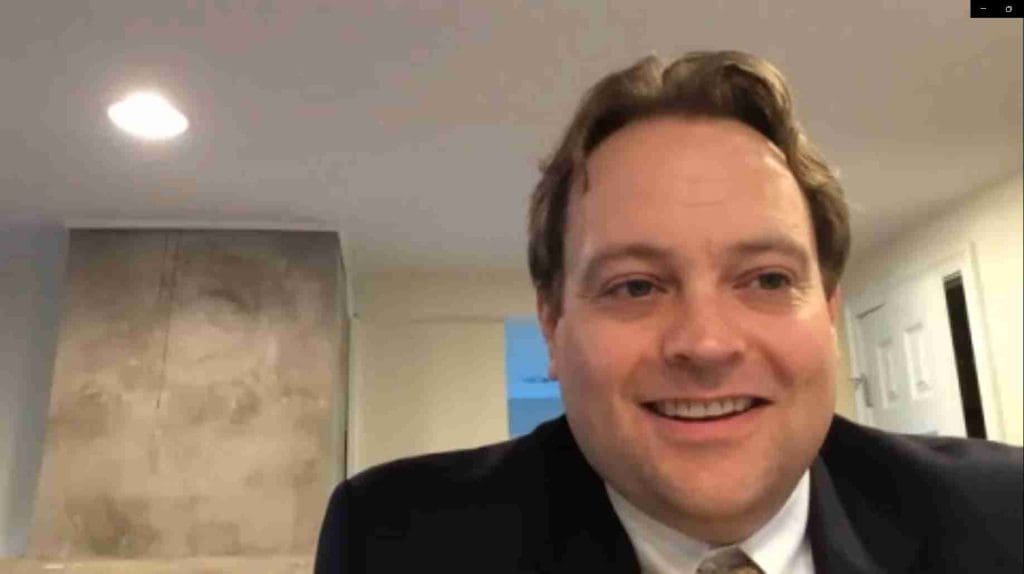 Norwalk/Wilton Judge of Probate Doug Stern accepts the Democratic endorsement for reelection, May 12 on Zoom.

NORWALK, Conn. – Democrats have endorsed Doug Stern to run for a second four-year term as Norwalk/Wilton Judge of Probate.

“As a former at large Councilman, a past city Zoning commissioner and a past officer of the Norwalk NAACP and now Judge of Probate, Doug has impressive resume for this position. Not only is he professional but he is also honest and transparent. He has the temperament to work well with everyone and he approaches this job from a sincere place, connecting with people both on his staff and during his day-to-day job,” Norwalk Common Council member Jenn McMurrer said in nominating Stern.

She continued, “This job oversees a lot of disputes, but as Doug describes it as a rich and fulfilling job. When asked what his favorite part is, he said the adoptions and the name changes, especially the transgender name changes, which is very special to be a part of.”

Stern is distinguished by his competence, his legal professionalism and “the kind of person that he is when he deals with people in very sensitive circumstances,” Wilton Democratic Town Committee Chairman Tom Dubin said.

Dubin, Chairman of the Norwalk Hospital Board of Directors, said he’d been at a Nuvance Health event and asked someone who had gone to probate for an opinion about Stern, without revealing his familiarity with the judge. “The person was beyond complimentary” and called it “certainly among the best probate courts in terms of competence and efficiency.”

“This has always been a Republican seat, and it’s a testament to him that right now, you know, he is a clear, hands on favorite,” Duff said. “They have not come after trying to recapture the seat again, because they know that Doug is a very strong candidate, and that he’s going to win, and that people like him, they know he’s doing a good job.”

“It’s very difficult when you’re a probate judge, because you deal with people at different levels of emotion,” Norwalk Mayor Harry Rilling said. “You have to be empathetic, you have to understand what they’re going through. You have to be patient, you have to listen. And you have to render wise decisions that help people navigate through the system.”

Stern “shows compassion,” Rilling said. “He is a highly intelligent person, who knows how to make people feel that he’s doing their job, and he’s helping them and making them feel like they that they’re getting this job that they that they expect.”

Stern said it’s an honor to be Judge of Probate.

“It’s a large district. It’s wonderfully diverse: trusts and estates and conservatorships and children’s matters and special needs, the elderly, commitments in Norwalk hospital, Medicaid, elder care and general elder abuse is a specific issue,” he said. “The list goes on…. I’m very thankful to all of you for trusting me with this responsibility.”

He said, “Politics is funny. You learn a lot about yourself, through your experience with other people. And I just feel so lucky to have had such a rich and human experience in my professional life that I take seriously and that I’m, I’m benefiting from every day. Through this experience, I understand things like patience and compassion, and empathy and loss, and closure and suffering. I understand all of these things differently now, because of what I’ve done the last few years and you all are, are responsible for that. So I feel very lucky and very thankful. And I promise to learn, I promise to continue to improve and I just want to do right by you guys.”