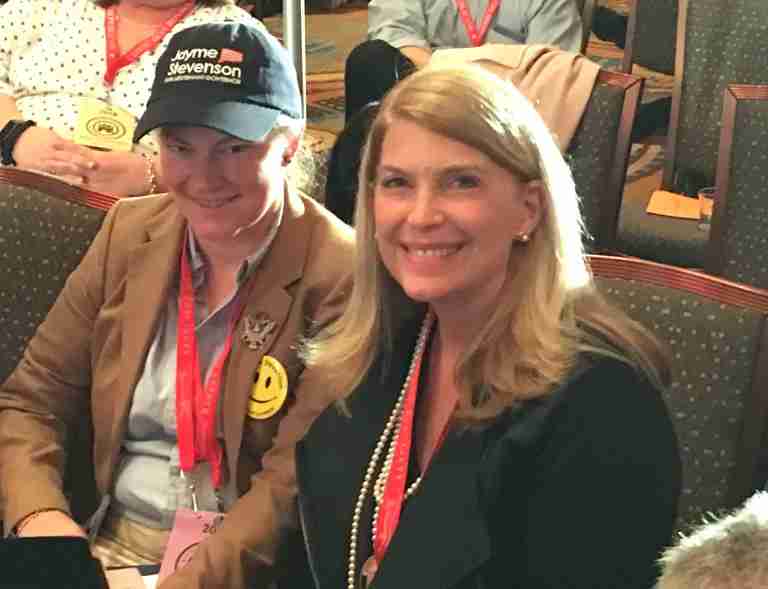 Thursday’s Fourth Congressional District Convention at Fairfield University featured 174 Republicans taking a microphone, and “156 of them stated clearly and decisively ‘Jayme Stevenson’ as their choice to take back the seat in Congress for the Republican Party.”

This means competitor Michael Goldstein “was well short of the 15% threshold to qualify for a primary.” 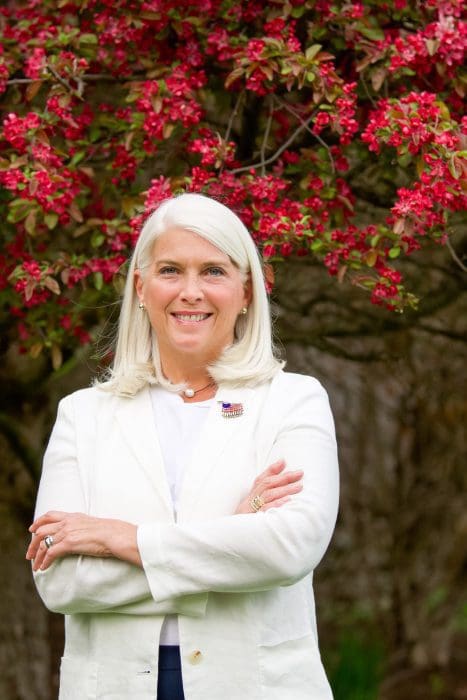 “In nominating Stevenson, Selectwoman Marcy Minnick of Darien said Stevenson approaches difficult issues with ‘reason and thoughtfulness …. She has grit and grace,’ and is the ‘clear choice’ to retire Jim Himes,” the release said.

“We are in uncertain and unsteady times …. God knows it is time for a change,” Norwalk’s Larry Cafero is quoted as saying, in seconding the nomination. Stevenson has “a strong hand and a gentle touch,” he said, endorsing her “compassion, caring, common sense and competence.”

Stevenson reportedly received an “enthusiastic standing ovation” after winning the vote and proclaimed, “We must come together in our common bond as principled Republicans to wrest the reins of power from the hands of progressive elites like Jim Himes and give it back to the people where it belongs.”

She told the convention, “I am not shy, and I know they’ll attack; but don’t worry, I am one tough lady.”

The release quotes her as going after Democrats and stirring “loud applause.” She said:

“The leaders of the Democrat Party have leveled an unprecedented assault on the American Dream.  In their quest for absolute power over the American people … they’ve deliberately undermined the safety and security of our communities by stoking social unrest and putting the rights of criminals before the rights of victims.

“Democrats fueled the embers of historic inflation by spending trillions of dollars as they tried in vain to reverse the devastation they created by disastrous COVID policies. They paid people not to work and crippled our supply chain.

“They sacrificed our energy independence in pursuit of their Green New Deal, forcing dependence on our global adversaries for fuel, and used the pandemic as a pretext to strip away our constitutional rights and liberties.

“As our children suffer from the isolation and academic regression of not being in school, Democrats targeted parents as ‘domestic terrorists’. I reject the idea of government as a co-parent to our kids.

“Immigration policy is broken, and our southern border has been hijacked by drug cartels allowing the free flow of fentanyl onto our streets. As a land founded by immigrants, we must, once and for all, forge bipartisan immigration reforms.

“I am ready, willing and able, with your help, to reverse the perilous march we are on toward socialism.”

The newly endorsed candidate presented a series of positions that she will take onto the campaign trail:

“Let’s be crystal clear about how we are going to win. We are going to win as the party of hope and common-sense solutions — and defeat the Himes-Biden-Pelosi-party of anti-America extremes and doubling down on failure.”

“Himes supports more government control. We will not waver in fighting for freedom, liberty and personal responsibility.

“He supports government taxing and spending more of your money. We will stand for less regulation, so businesses can flourish, and we will lower taxes, so you keep more of your hard-earned income.

“He will continue to go along with his fellow Washington elites, climbing the progressive political ladder. We will fight for the real champions of southwest Connecticut — families working hard every day to pay their bills, and to seek a good education and better life for their kids.”

“It’s been a disastrous 15 months …. America cannot withstand two more years of the progressive, elitist Himes/Biden ideology that hides a Marxist agenda under a veneer of false patriotism. Freedom needs defenders, and I am prepared to lead that fight in the Fourth District of Connecticut with all of you by my side.”

“After serving as the Town of Darien’s Chief Elected Official for 10 years, where she kept property taxes down, managed Town services and government during the COVID-19 pandemic, navigated recovery from severe storms and floods, and helped to keep the calm during racial tensions and protests, Stevenson did not seek re-election in 2021 and set her eyes on representing southwestern Connecticut in Congress.

“A wife of 35 years, mother and grandmother, Stevenson was born and raised in Reading, Pennsylvania, one of the poorest cities in the America. She graduated from Arizona State University’s Walter Cronkite School of Communications with a degree in telecommunications and business management.

“Stevenson rose to Vice President of Asset-Backed Finance at Standard & Poor’s Corporation before leaving New York City and moving to southwestern Connecticut with her husband and raising their five children.”

There might be room for a rational Republican in Fairfield County. Based on this speech Ms Stevenson is not that person. The lies, the animosity and the dog whistles will leave the Republican Party around here in a permanent minority.

Jim Himes is a nice guy, but he is a tool of the Democrat political machine. He has vote for disastrous spending programs, voted for Build Back Better, etc., etc., etc. He was a major promoter of the Russia Hoax despite serving on the House Permanent Select Committee on Intelligence, voted for 2 phony impeachments and has currently been silent on the immigration crisis that challenges our national sovereignty. Yet he voted to give money to Ukraine to protect their borders. In fact, I can’t remember one bill where he departed from the the Demo machine political agenda that has nearly destroyed our Republic. We need to get off this runaway train to disaster and return to the independent thinking of our Connecticut Yankee heritage.