All that is left of a large pine tree in Norwalk’s Woodward Avenue Park is a stump.

The Board of Estimate and Taxation on Tuesday approved a transfer of $6,500 from a utility account to a tree removal account. That is because many trees in the park system are dead or dying, Department of Parks and Recreation Director Mike Mocciae said.

“A lot of trees have been struggling since the past two seasons of storms,” Mocciae said in an email. “Dead trees must be removed if they become a hazard for safety in the parks.” 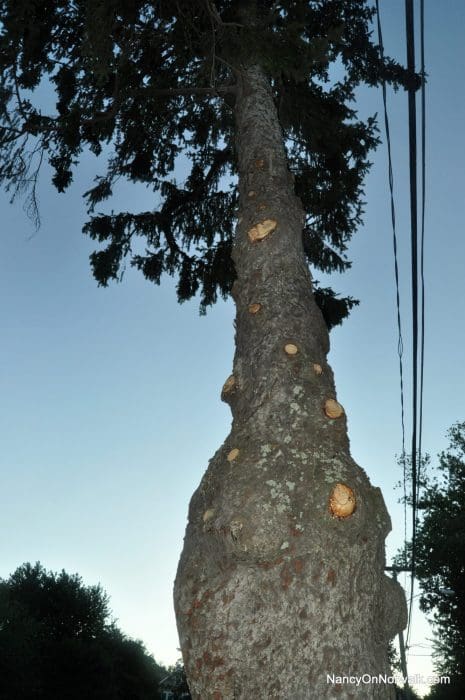 Neighbors of Bouton Street Park said they were upset about the recent trimming of this tree.

There is a row of stumps along the Woodward Avenue edge of the park there. Bouton Street Park shows only one obvious sign of tree damage, as numerous low-hanging branches have been cut from a large tree close to the road. Two park neighbors who were standing next to the tree Thursday evening lamented the work that had been done, and hoped the tree would remain. “It’s beautiful,” they said.

Mocciae said there may be some mitigation of the damage.

“We will be replacing  trees in areas where there has been an unusual amount damaged,” he said. “The Council had approved a significant budget for tree replacement over the past two seasons.”

OMG!!! Where are the Oak Hills tree huggers on this??? Cutting down a tree? What a sacrilege!!!

Cutting down a dead tree before it falls on somebody is not a sacrilege. Calling people with an interest in preserving our environment “tree-huggers” demonstrates not only an opposing point of view, but a limited ability to support that point of view, limited to name calling. Kind of sad, coming from a grown man.