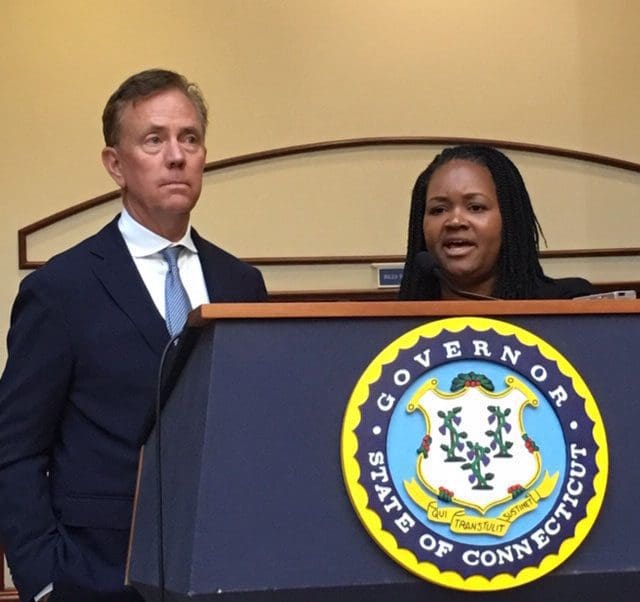 The surging revenues also give lawmakers more money to assist public universities and others hurt financially by the pandemic.

“Despite the COVID pandemic, the U.S. stock market is 14.0% higher than a year ago,” Office of Policy and Management Secretary Melissa McCaw, Lamont’s budget director, wrote in her monthly forecast to state Comptroller Kevin P. Lembo.  “In addition, pandemic-related closures of many businesses may have caused deferred consumption of goods and services, resulting in pent-up demand that is now being realized.”

The administration now projects a deficit of just under $1.3 billion, which still represents more than 6% of the budget’s General Fund, which covers most operating expenses.

Most of that improvement, about $454 million, is tied to enhanced revenue projections.

On the spending side, the Lamont administration has more than tripled the amount of funds it expects to save this fiscal year due to employee attrition and other efficiencies, or because programs have been scaled back or suspended. It now projects to save $334 million, compared with $98 million just one month ago.

Lamont has been criticized by some of his fellow Democrats for being too frugal during the pandemic and for clinging to very conservative budget projections — even though the stock market has recovered more than all of the value it lost shortly after the coronavirus outbreak began.

The situation on nearby Wall Street is particularly crucial for Connecticut. The state income tax, which pays for nearly half of the General Fund, derives almost one-third of its resources from quarterly filings, which largely reflect capital gains and other investment-related earnings.

On May 1, the administration warned Connecticut was on pace to exhaust its $2.5 billion reserve and run up about $500 million in operating debt by June 30, 2021.

Instead, Connecticut’s rainy day fund actually has grown since then, reaching a legal maximum of just under $3.1 billion.

More importantly, the administration now expects to have nearly $1.8 billion in the bank when the fiscal year ends next June 30— and no operating debt.

That’s key when it comes to avoiding tax hikes over the next two years.

Another part of Lamont’s gloomy warning last May was that revenues were projected to come up short by more than $4 billion  — just over $2 billion per year — in the biennial cycle running from 2021 through 2023. He must propose his plan for that two-year budget in February.

But if the legislature’s nonpartisan fiscal analysts, who must weigh in on revenue trends on Nov. 10, agree that tax receipts are improving, they might also upgrade expectations for the coming biennium.

Lamont and legislators also could apply the $1.8 billion rainy day fund to prop up the next budget.

And if another round of federal aid brings as much as $3 billion more in relief to Connecticut, as some state officials hope, the odds of avoiding tax hikes would improve even more.

The improved budget forecast also could mean Lamont will face increased pressure from lawmakers when the 2021 legislative session opens in January to channel more state funds to programs and services harmed during the pandemic.

The state universities and community college system recently reported an unprecedented deficit of nearly $70 million, while the University of Connecticut is seeking more than $104 million in state assistance. The UConn Health Center in Farmington also recently secured a $45 million loan to keep its finances afloat through June 30.

Connecticut’s private, nonprofit social services network, which provides the bulk of state-sponsored programs for the disabled and people  with mental illness, also reports it has suffered millions of dollars in lost revenue and added costs since the pandemic began.

And cities and towns projected in June that they face about $400 million in lost or deferred revenue from taxes or other sources, due largely to the pandemic.

“We’re kind of doing OK,” he said in early October. “…I’m pretty optimistic that as a city, our revenue streams are going to hold up pretty well.”

Hopefully doing less lousy than expected doesn’t translate into more out of control spending. The belt should continue to be tightened as the January estimated payments will be the true bellweather of how we are going to do and with a lot of industry still shut down and federal stimulus running out, Q4 might not be so good.

More constructively, I’m surprised no one has discussed the tax nexus that may have been created by NYC being shut down for so long. Legally, if those employers were not able to offer office space in NY and told their workers to work from home in CT, then the income tax liability is owed to CT, not NY. Just an educated guess, but if 100,000 commuted every day earning $100,000 a year and we are talking $500,000,000 easy.