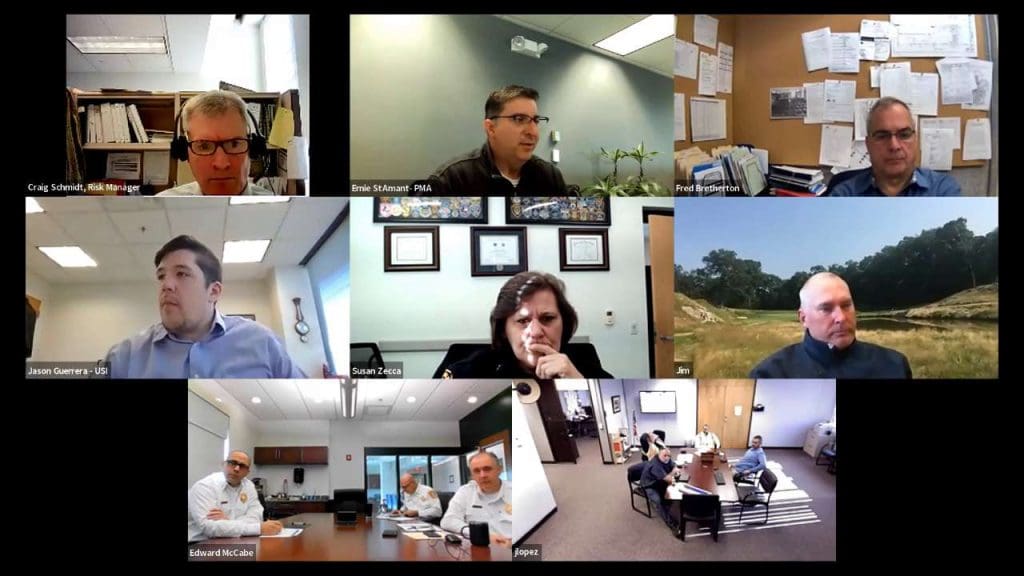 A City meeting held Nov. 17 on Zoom to discuss inspections done by Connecticut OSHA (Occupational Safety and Health Administration) and the citations that would ensue.

NORWALK, Conn. — An unannounced standard inspection by Connecticut OSHA (Occupational Safety and Health Administration) shook up City officials in November, because, they say, it’s been decades since the last one.

Violations in the citation provided Wednesday to NancyOnNorwalk range from a heater being plugged into a power strip to the absence of a railing on a platform over a boiler, where an employee could fall 10 feet. Exit signs are an issue. More importantly, some firefighters’ protective gear is out of date and needs to be replaced.

Assistant Fire Chief Ed McCabe said in November that this could cost $200,000. The City didn’t provide an update Thursday.

Conn. OSHA inspected the Fire Department, the Police Department and the Department of Operations and Public Works, as well as the Oak Hills Park golf course, a city-owned property, between Oct. 11 and Nov. 7, documents show.

Possible fines total about $22,000, Norwalk Director of Communications Michelle Woods Matthews said. It’s possible this will be at least steeply reduced, as the next step in the process is an informal conference, in which the City can “ask for penalty reductions, resolve disputed citations and penalties, discuss ways to correct violations and establish alternate abatement dates.”

“Improvements such as a protective handrail at DPW is approximately $15,000, and electrical work is about $5,000, and other potential costs are small in comparison,” Woods Matthews said.

Woods Matthews released a statement from the City on Wednesday:

“The OSHA representative indicated that an inspection hasn’t been completed in the City of Norwalk in at least 30 years. The OSHA inspector spent a week on-site, and followed up with an informal meeting with the Mayor and Department heads to discuss his findings prior to issuing the formal Citation, which was received today.

“The inspector prefaced the meeting by saying while the list of violations seems long, we should keep in mind the context that, given it is the first inspection in at least 30 years, he would have expected the list to be significantly longer and more serious. A majority of the findings are related to extension cords, coffee makers and other small appliances, storage of boxes, and documentation, as well as a few more serious items such as a missing hand and guard rails. He informally reviewed the violations with staff and told us to expect the official citation in December.

“While we are continuing to compile information, the City estimates that we have corrected approximately 90% of the issues identified in advance of receiving the official Citation. We will continue to work towards addressing the intermediate and long-term items within the timeframe OSHA allows.

“We are in the process of correcting intermediate issues such as, but not limited to, the electrical wiring for kitchen appliances, installing a guardrail in the Public Works garage, and replacing and updating our eyewash station.

“In the long term, we plan to implement annual employee training sessions based on OSHA’s report. Workplace safety remains a top priority for Mayor {Harry} Rilling and the City will continue to make progress in addressing all of OSHA’s stated findings.

“… It is our understanding from the inspector that our unannounced inspection was not initiated by a complaint but rather as part of CT OSHA’s efforts to start doing more frequent spot inspections of municipalities. This is a departure from focusing primarily on complaint-driven inspections, which has been their practice in the recent past.”

Labor Department spokesperson Juliet Manalan confirmed that OSHA conducted “programmed inspections,” which are “1) unannounced, 2) not generated by the receipt of a complaint, and 3) usually done every 7-10 years.”

But it’s been a while, as mentioned by the City.

“Generally, these standard inspections (called Programmed Inspections) happen every 7-10 years; the CONN-OHSA unit is aware that it’s been a longer timeframe than usual for Norwalk,” Manalan said Thursday.

While the City said Conn. OSHA is doing more frequent spot inspections of municipalities, Manalan said, “There is no change on the CONN-OSHA side. Of note: every 5 years, CONN-OSHA does a strategic plan for federal OSHA (they fund the CONN-OSHA program). We handle Programmed Inspections, high hazard industries, as well as complaint investigation.”

Another citation on the way

Manalan said, “Since the inspection last month, the CONN-OSHA unit has received three complaints and is investigating those as well.”

“The Board of Education received employee complaints at a few schools, citing a lack of Personal Protective Equipment for staff while working with students who are not toilet trained. A Closing Conference was held today at City Hall, and we expect to receive a Citation Letter from CT-OSHA in about a month,” Woods Matthews said Thursday.

In November, a City employee mistakenly put an internal meeting on the City’s YouTube channel.

Ernie St.Amant of PMA Risk Services, hired as a consultant to deal with the OSHA issues, met with leaders of the departments that had been inspected, who were working off notes provided by the OSHA inspector, Scott Adams.

“This is not a freakout moment. This is, ‘Let’s gather our details, our facts and come up with a very succinct plan to make sure our abatement to this is 100% on board,’” StAmant said.

St.Amant said he was “loving” all the attention Norwalk was giving to the coming citation. “I do about 15 to 18 of these a year. I’ve never seen this much attention. … Usually we’re begging to get stuff done.” 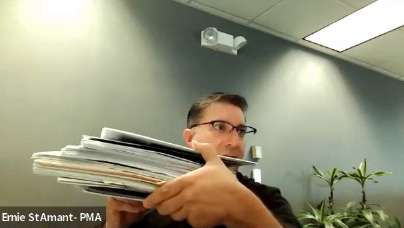 A Conn. OSHA rep reported that five municipalities had more than 100 open citations each, St.Amant said. Greenwich was undergoing a five-day wall-to-wall inspection that included an industrial hygienist on scene, and West Haven’s 136 item citation was taking that City almost 16 months to abate.

He predicted that Connecticut OSHA Director Rosa would be kind because “they don’t want to take money away from the taxpayers,” OSHA just wants to see conformation to the safety codes. “All this is just an objective view coming into our house, to say we should be looking at safety in a different way.”

On Thursday, Woods Matthews said PMA was hired at a maximum $9,000 cost.

The video was removed from the City’s YouTube channel. 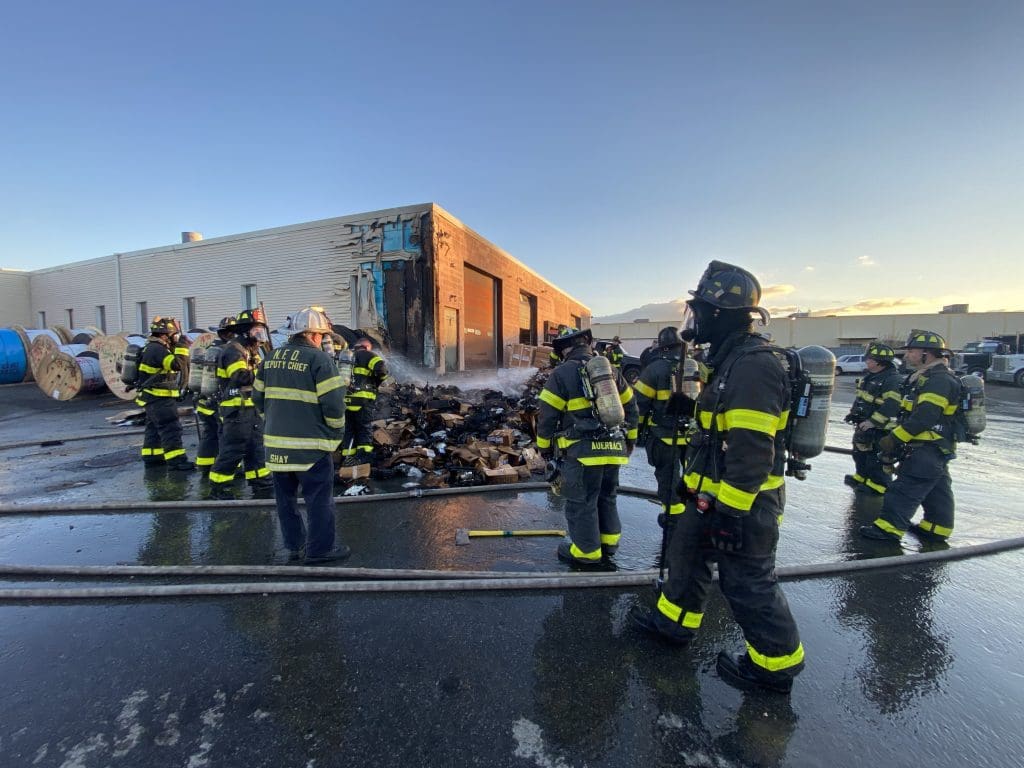 Firefighters covered Station 4 bunkroom exit signs with cardboard so they could sleep, and that would be $350 if the fine went through the process. Helmets were found with earflaps uninstalled, a possible $490 fine, and the work rest for a grinding machine was more than an eighth inch away from the abrasive wheel, also a possible $490 fine.

A power strip in the Assistant Chief’s Office was found plugged into another power strip, a possible $280 fine.

Complaints in other stations are similar, with many innocuous items, such as an extension cord powering a soda machine, carrying no possible fine. But the Station 1 discovery of structural firefighting gear that had exceeded its 10-year life span could result in a $720 fine – and that would be the cheap end of the equation.

All of the department’s primary “turnout gear” is less than 10 years old but some of the spare sets are older, Assistant Fire Chief Ed McCabe said at the Nov. 15 Fire Commission meeting. “Turnout gear” is the firefighters’ coat and pants; they’re told to wash their gear after every fire to prevent them being exposed to carcinogens and therefore spares are needed, according to McCabe.

Chief Gino Gatto said the secondary sets of gear are either 10 years old or a little older.

According to the website Firefighter Insider, turnout gear is made of Nomex-Kevlar and costs vary according to size, brand and special modifications.

McCabe thought sets of gear would be $3,000 each and “we’d probably be looking at a couple of $100,000 to get us in total compliance, for both sets for every firefighter.”

Kind of amazing that OSHA hasn’t been around in 30 years!🥵. Glad to hear we’re all in pretty good shape.👍🏼💪🏼😇🇺🇸🎄 happy holidays