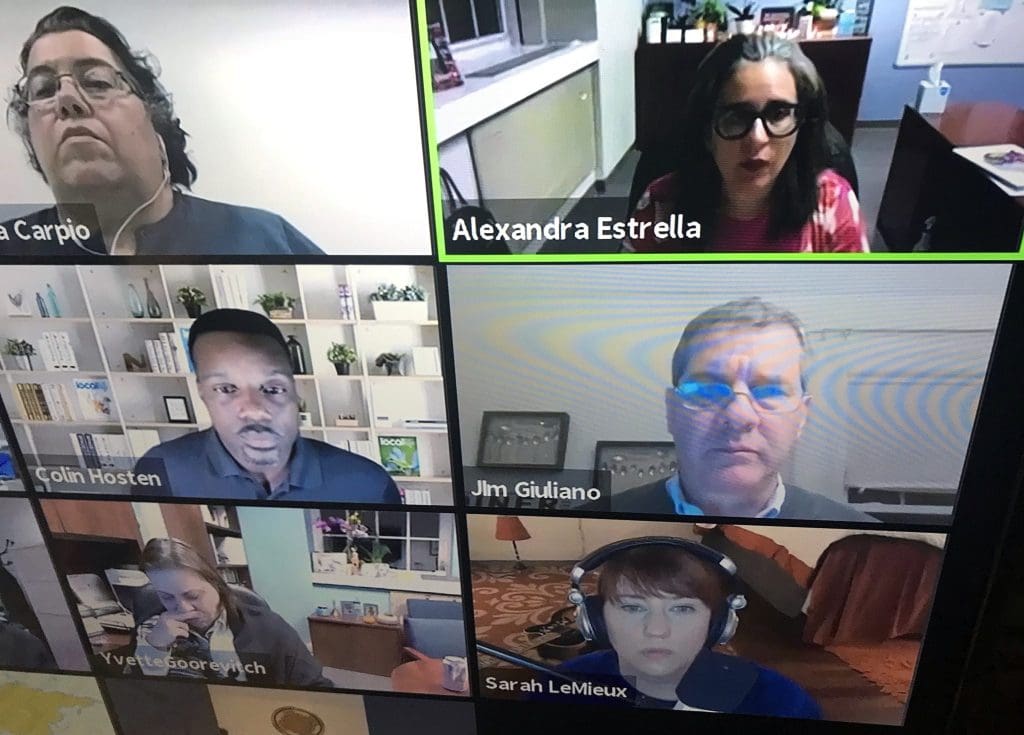 Tuesday’s Norwalk Board of Education meeting on Zoom, as shown on the Norwalk Public Schools YouTube channel.

NORWALK, Conn. — Revised plans for a new Norwalk High School advanced Tuesday, with an announcement of another possible change.

“One of the things that I’ve discussed is the possibility of instead  of having an art academy with it, within the campus, making the arts focus a pathway within Norwalk High School,” Norwalk Superintendent of Schools Alexandra Estrella said.

The Board of Education went on to approve the Education Specifications (Ed Specs), with one dissenter: former Facilities Committee Chairman Mike Barbis voted against the plans.

Barbis said the new high school was not on the master plan he helped develop and that once the Ed Specs are approved, the Board has no legal right to change the plans.

Estrella said she’d spoken with State officials and there’s flexibility, plans can change and “actual design specs can continue to be modified” within the limitation of 328,000 square feet overall.

“I’m going to hold them to all the commitments that they made on Monday, which is the ability to redesign and adjust the needs of the two schools,” she said.

Changes are needed because while the State legislature approved the 80 percent construction cost reimbursement promised by State Senate Majority Leader Bob Duff (D-25) the authorization was for a $189 million total cost rather than the $225 million originally expected and planned for. 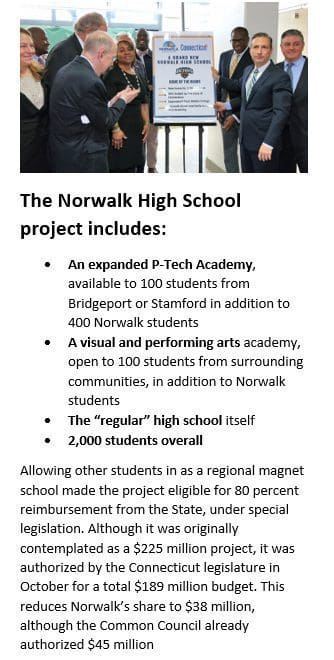 Estrella called the resultant cuts “not a redesign” but a “continual adjustment of the floor plan to make sure that we’re satisfying the needs of the program with the principals and other constituents within the different school communities.”

Board of Education Chairman Colin Hosten said that the vote was needed for State bureaucratic reasons. It’s required that meeting minutes be included in an application, and those minutes have to be from the previous month. The grant application must be submitted by Dec. 31.

He asked project manager Jim Giuliano if, “There is room, if we continue to get feedback from the stakeholders, including the building leaders and our community, if we are able to make certain tweaks and adjustments to the design specs.”

“Yes, we do have latitude within the square foot area and the budget that we have to make adjustments to those Ed Specs as necessary,” Giuliano replied.

“I think we got some very interesting emails today, questioning things, especially with regards to P-Tech, which is the whole justification behind this project,” Barbis said. “This whole project is riding on P-Tech, and yet, they’re having classrooms taken away, space taken away – and maybe this space can get reallocated, but it is out of the Board of Ed’s hands. And this is what we’re giving our blessing to.”

Estrella again said she’d hold the State to its word, “and make sure that the communities have the opportunity to have these conversations.” She’s spoken to Building and Facilities Manager Alan Lo and Giuliano “about how we can rethink this,” possibly “shift the concept of the Arts Academy to really ensure that both programs are successful, and that they have the adequate space.”

She promised an update in December. P-Tech Director Karen Amaker and NHS Principal Reginald Roberts can meet with the Facilities Committee “to speak about some of their recommendations and where they are with those recommendations as well.”

“I definitely trust you when you say their voices are going to be heard,” Board member Sherelle Harris said.

‘The pool is almost Norwalk’s heartbeat’

Estrella also said the State “assured us” that the Norwalk High School pool “is moving forward.”

Giuliano said the pool would be reimbursed at a 40 percent rate, or half of the 80 percent rate for the overall project.

“The pool, we’ve had issues in the past, maybe I’m talking years ago, you know, opening and closing the pool, renovating the pool, building it as new,” Keyes said. “And definitely, that’s almost the heartbeat of our community in Norwalk, having the pool at Norwalk High School, which makes us very unique, and is really, really important.”

It’s in the plans as an “add alternate,” Giuliano said. ‘

“Everybody has to understand this is a very preliminary step in the process,” Giuliano said. “You know, we have engaged consultants and architects really just to look at the site relative to the size of the building, and does it fit on the site? Does it fit where we want to put it? And can we do this?”

The professional cost estimator involved has made “certain assumptions because we don’t have all the details at this point. So you know, he may be a little conservative in their pricing,” he said. A firm design and utilities research will give “us a much better idea of where our options are in terms of saving money, and being able to include the pool,” and architectural firms will be evaluated partially on their ability to work within the budget and include the pool.

Former BoE Chairman Sarah LeMieux said, “procedurally, bureaucratically, if we don’t vote to move this forward, now, nothing will ever happen.”

“The project will not be able to move forward, because it’s not the sort of thing, as far as I understand, where we will get another chance if we delay this piece of the process,” she said.

Ed Specs and design specs aren’t as concrete as the public perceives them to be and “we did not look at blueprints or plans for an actual physical plant and say, ‘this is this’ and ‘this is this,’” she said.  “It’s a much less definite stage of planning than I think is understood in the public sphere of discussion that’s happening.”

“It sometimes feels counter-intuitive to be voting on something that still has so much to be fleshed out,” Hosten said. “But again, it’s important to remember that that is partly because of a time requirement at the state level.”

The fact that the costs are reportedly “based on a very conservative model gives me a lot of hope,” Hosten said.

“This is has been a hot topic for discussion, but I want to remind folks that this has the potential to go very, very well, right? I mean, I think it’s easy to see the ways it can not, which is kind of true of most things. But if it does, I mean, you know, we have the potential to have a marquee high school, at Norwalk High School, with great programs, both at P-Tech and at the Arts Academy, however that is integrated. And I think getting there will take cooperative work on the board side, but as Mike said, also in the City side, and on at the State level. So it is very much collaborative. And I don’t see that any one of these stakeholders is giving up, you know, control. We have to kind of work together for it to work.”

Barbis is 100%
right, and needs no defense. Having a Hallmark Greeting card writer appointed to the board makes the pain manageable. I feel better already.

The Charge of the Light Brigade comes to mind.

If you think these Ed Specs offer flexibility, they do. Except anything you do outside of them will not be eligible for reimbursement. This is the primary reason the 80% New Lebanon School never got close to 50% reimbursement.

Bottom line, hold onto your wallets and if you live on the bottom of Strawberry Hill Ave, sell your house now while you can before you live in the new wind tunnel buttressed by the school that is going to tower over whatever sunlight you once had on your property.

And the beat goes on. I don’t see how we can do for $189,000 what ww can do for #225,000. Can someone do away with the double talk and say what the givebacks and/or compromises will be comparing the two potential projects?
Time restraints be damned, if we can’t do it right let’s not do it. It’s time to stop settling for just OK or second best if we are striving to be the best.
Norwalk is being asked to sign a blank check and someone will fill in the amounts later-never a smart thing to do!

Whatever you think about the new school, the plan to keep the arts part of Norwalk High school instead of separating them (and leaving the rest of NHS without arts) is a huge step in the right direction. Adamowski wanted to carve the schools up and force children to specialize in 8th grade, and I’m happy to see the new administration stepping away from that philosophy. Hopefully common sense prevails and a similar outcome is reached for PTech. Putting up walls between programs that are in the same building helps no one. Give our kids more choices, not fewer!