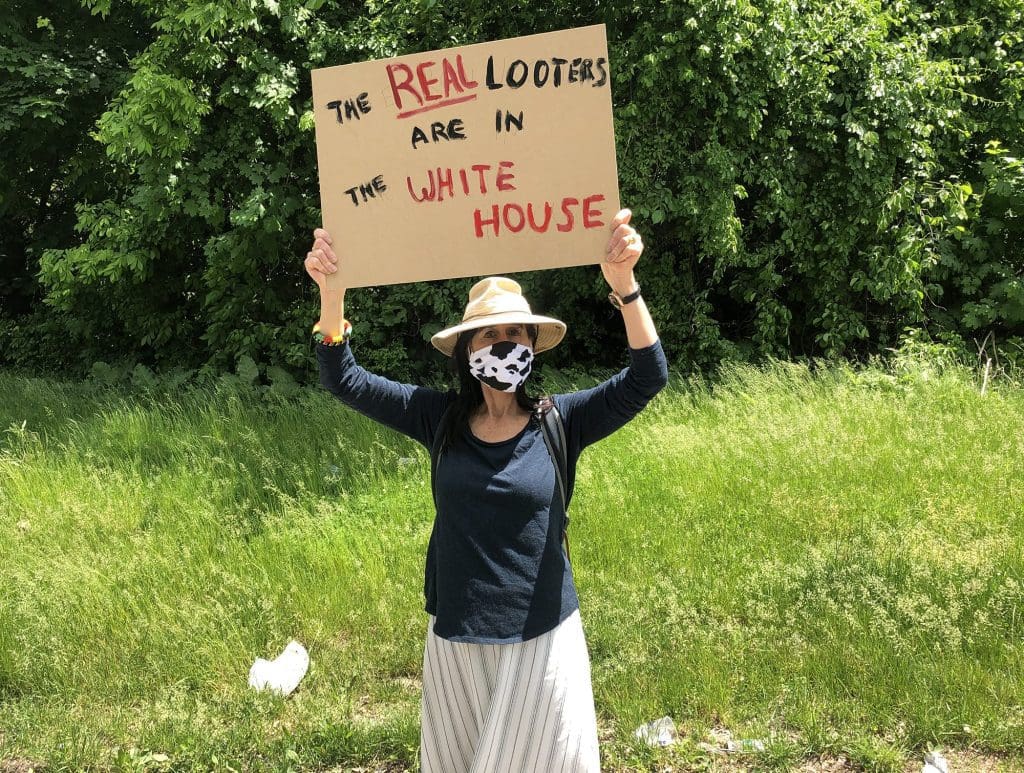 That was the message I received in my email Saturday.  So Sunday morning I set out on a two mile walk to join the protest.  And as I did so my mind took me on another trip entirely.

First stop 2009.  I am sitting  in front of my T.V. holding back tears and thinking about how far our country has come while watching Barak Obama take the oath to become President.  Next stop last Monday when George Floyd is murdered by white police officers, and Amy Cooper, a white woman in New York’s Central Park, tried to get a peaceful birdwatcher guilty of being black arrested for threatening her life. 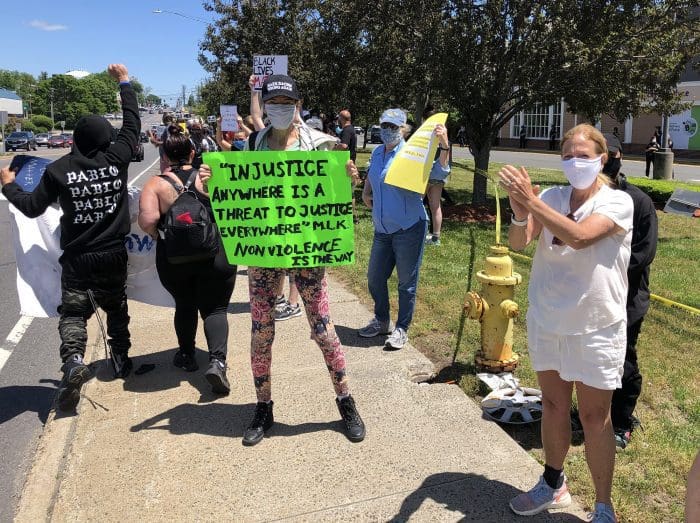 Clearly racists and xenophobes and other bad actors have been emboldened by the current administration.   Hence our job is to stand up against them and a President who they see as supporting their views and behavior.

So with that in mind let’s add a THANK YOU PEACEFUL PROTESTORS! message to the THANK YOU HEALTHCARE WORKERS!  THANK YOU FIRST RESPONDERS!  And THANK YOU ESSENTIAL WORKERS! signs we pass on our walks in these stressful times.

THANK YOU PEACEFUL PROTESTORS for your courage and willingness to take on the fight against viruses more dangerous than the coronavirus and relegate the racist, misogynist, xenophobic demagogue and his supporters that are spreading them to the history books.  As Edmund Burke put it in 1770:  When bad men combine, the good must associate; else they will fall, one by one, an unpitied sacrifice in a contemptible struggle.

If They Bring a Knife to the Fight, We Bring a Gun

It’s not surprising, then, they get bitter, they cling to guns or religion or antipathy to people who aren’t like them or anti-immigrant sentiment or anti-trade sentiment as a way to explain their frustrations.

“No, no. I have been practicing…I bowled a 129. It’s like — it was like Special Olympics, or something.”

‘We’re gonna punish our enemies and we’re gonna reward our friends who stand with us on issues that are important to us,’

The point I was making was not that Grandmother harbors any racial animosity. She doesn’t. But she is a typical white person…

If you’ve got a business — you didn’t build that. Somebody else made that happen.

I’m sure given the chance he would also commend the peaceful protesters for standing in the way of LEOs from apprehending those causing mayhem.

I’m happy to see people from Westport and other towns support the march Sunday. If they really want to help they’ll support regionalizing school systems. Now is the time to act as everyone seems to be a united front. Walking in a march is nice but let’s really push for educational changes in our county..Let’s make it happen now..

For the record, please include my favorite memory of Obama in case it got cut off my last post. Taking a selfie at Mandela’s funeral. What a class act? https://www.youtube.com/watch?v=qhJt2cItJks

It’s so good to see our voted-out white BOE member provide his repeated attacks on President Obama at this time.

You can always count on Republicans to (eventually) reveal their true selves.

Peter, what does me being white or a former board member have to do with the seed of division sewn by your hero? FYI, I have more Native American Indian in my lineage than your other hero Senator from Massachusetts. But don’t worry, I won’t call you a racist like you like to casually imply about others you don’t even know.

For the record, please include my favorite memory of TRUMP Taking a selfie with Jeffrey Epstein. What a class act?
https://www.washingtonpost.com/politics/donald-trump-and-jeffrey-epstein-partied-together-then-an-oceanfront-palm-beach-mansion-came-between-them/2019/07/31/79f1d98c-aca0-11e9-a0c9-6d2d7818f3da_story.html

Bryan
Here is some reading material for you.
https://www.yourdictionary.com/slideshow/donald-trumps-10-most-politically-incorrect-statements.html

Ron, you REALLY want to go there?

and this from today’s (June 3) WSJ

Retired Adm. Mike Mullen, a former chairman of the Joint Chiefs of Staff, wrote Tuesday that he has been sickened to see security personnel and National Guard troops used to clear a path through Lafayette Park for Mr. Trump. He added that he wasn’t convinced that the security conditions on U.S. streets required a heavy reliance on U.S. troops

“Whatever Trump’s goal in conducting his visit, he laid bare his disdain for the rights of peaceful protest in this country, gave succor to the leaders of other countries who take comfort in our domestic strife, and risked further politicizing the men and women of our armed forces,” Adm. Mullen wrote in The Atlantic.

In a June 2 letter, James Miller, a former undersecretary of defense for policy during the Obama administration, resigned in protest from an advisory Pentagon panel, the Defense Science Board, and asserted that Mr. Esper had violated his oath by acquiescing in the use of force in Lafayette Park and participating in a photo op.

“As a concerned citizen, and as a former senior defense official who cares deeply about the military, I urge you to consider closely both your future actions and your future words,” wrote Mr. Miller, whose letter was published by the Washington Post.

I have watched this week’s unfolding events, angry and appalled. The words “Equal Justice Under Law” are carved in the pediment of the United States Supreme Court. This is precisely what protesters are rightly demanding. It is a wholesome and unifying demand—one that all of us should be able to get behind. We must not be distracted by a small number of lawbreakers. The protests are defined by tens of thousands of people of conscience who are insisting that we live up to our values—our values as people and our values as a nation. When I joined the military, some 50 years ago, I swore an oath to support and defend the Constitution. Never did I dream that troops taking that same oath would be ordered under any circumstance to violate the Constitutional rights of their fellow citizens—much less to provide a bizarre photo op for the elected commander-in-chief, with military leadership standing alongside. We must reject any thinking of our cities as a “battlespace” that our uniformed military is called upon to “dominate.” At home, we should use our military only when requested to do so, on very rare occasions, by state governors. Militarizing our response, as we witnessed in Washington, D.C., sets up a conflict—a false conflict—between the military and civilian society. It erodes the moral ground that ensures a trusted bond between men and women in uniform and the society they are sworn to protect, and of which they themselves are a part. Keeping public order rests with civilian state and local leaders who best understand their communities and are answerable to them. James Madison wrote in Federalist 14 that “America united with a handful of troops, or without a single soldier, exhibits a more forbidding posture to foreign ambition than America disunited, with a hundred thousand veterans ready for combat.” We do not need to militarize our response to protests. We need to unite around a common purpose. And it starts by guaranteeing that all of us are equal before the law. Instructions given by the military departments to our troops before the Normandy invasion reminded soldiers that “The Nazi slogan for destroying us…was ‘Divide and Conquer.’ Our American answer is ‘In Union there is Strength.’” We must summon that unity to surmount this crisis—confident that we are better than our politics. Donald Trump is the first president in my lifetime who does not try to unite the American people—does not even pretend to try. Instead he tries to divide us. We are witnessing the consequences of three years of this deliberate effort. We are witnessing the consequences of three years without mature leadership. We can unite without him, drawing on the strengths inherent in our civil society. This will not be easy, as the past few days have shown, but we owe it to our fellow citizens; to past generations that bled to defend our promise; and to our children. We can come through this trying time stronger, and with a renewed sense of purpose and respect for one another. The pandemic has shown us that it is not only our troops who are willing to offer the ultimate sacrifice for the safety of the community. Americans in hospitals, grocery stores, post offices, and elsewhere have put their lives on the line in order to serve their fellow citizens and their country. We know that we are better than the abuse of executive authority that we witnessed in Lafayette Square. We must reject and hold accountable those in office who would make a mockery of our Constitution. At the same time, we must remember Lincoln’s “better angels,” and listen to them, as we work to unite. Only by adopting a new path—which means, in truth, returning to the original path of our founding ideals—will we again be a country admired and respected at home and abroad. —James Mattis

Since when has safeguarding against violent rioters been a cardinal sin? Conflating peaceful protestors with violent rioters is a convenient pathway for political expediency and serves to divide (aka Antifa, Black Lives Matters). Trafficking in racism, race bating and identity politics is also just as dangerous game. I am white, I am not a racist nor or any of my white friends or colleagues. Perhaps this cop was a racist or perhaps he was just deranged. Do we really know? Is systemic racism as widespread as some claim? Maybe/maybe not. When a gang of black teens killed a white college student last year macro stereotyping against a specific group was never lobbed to this extreme. Yes, justice is happening and the cop will be held accountable to the fullest extent of the law.

Let’s also keep in mind these incidents are happening in all Democrat strongholds so to pin this on Trump defies logic. President Trump has accomplished more on social justice reform than his predecessors which lacked substantive reforms. I fully intend to support him for his reelection bid.

CT-Patriot
Answer to your question. Yes Bring it on.

I have been a long time Educator in the Norwalk Public Schools, who is very concerned at how the Public School sytem along with the Board of Education is currently voicing its acceptance of the turmoil that is gripping our Nation. I love the city of Norwalk and the Public School system here, but I’m very worried for our young people, who have little or no say in this matter. Like many Americans I feel the downfall of our American value system is quickly approaching. What happened to George Floyd as everyone knows is a horrendous dispicable act and everyone knows what these police did was wrong. However, what many people are not realizing is that a number of the people in the Black Lives matter movement are using this movement to justify the looting of business places, killing of inncocent people, and the downfall of our historical Monuments. Most Black and White people do not want this and believe the media and certain wealthy people in high places are behind this turmoil. Also there are the Luciferians, and the LGBT community mixing in with this now. Everyone realizes that all people need to be respected and treated as a child of God regardless of race, creed, color, gender etc. But as a concerned Educator I am very worried for our young people. If people do not come back to God and the Commandments, America as the free and wonderful nation we know will cease to exist. I encourage the good people all over Norwalk and the Nation to stand up for our young people and to fight for justice and Peace. We all should be united as one people today, not divided, not a people that are being forced to live a certain way. May God Bless the people of Norwalk, and the children of this great Nation.