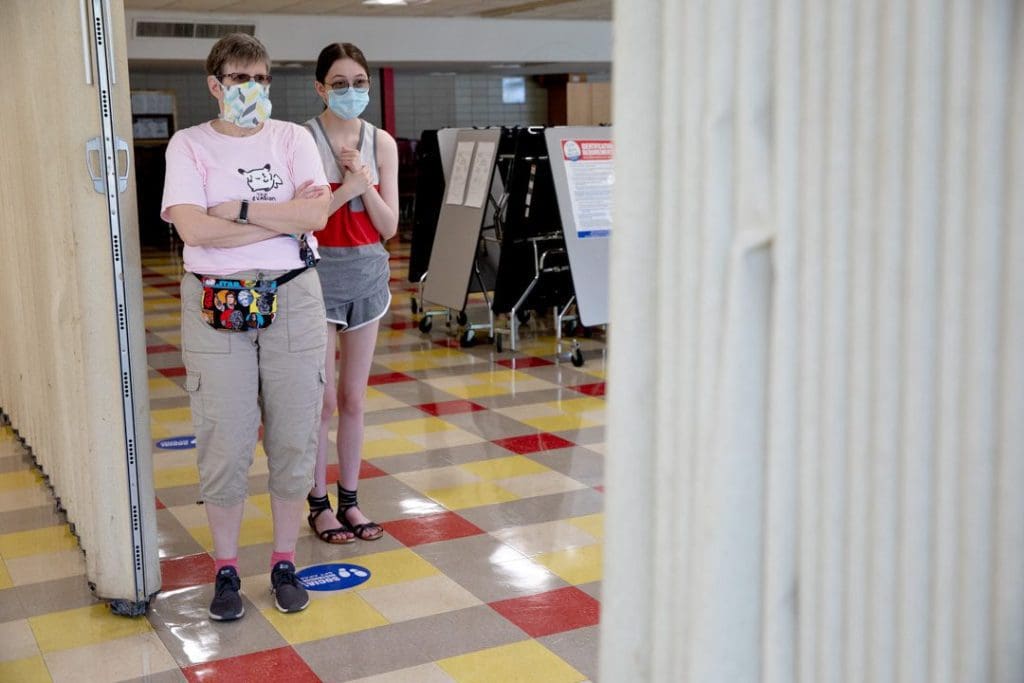 Johanna Davis, left, and Elizabeth Davis wait for their turn to vote in the primary election on Tuesday, Aug. 11 at Conard High School. It was Elizabeth’s first time voting. “It was a lot easier than I expected,” she said. (CTMirror.org)

But the results for some of the contested nominations in 14 state legislative districts could take days as the last votes aren’t expected to arrive until Thursday’s mail — one of the many firsts in a primary shaped by a pandemic and a massive blackout.

With the presidential primaries long settled, the focus in Connecticut was on the complications in producing results in the first election in which every voter could use an absentee ballot as a concession to COVID-19.

All ballots postmarked by Tuesday will be counted, so long as they arrive in the mail on Wednesday or Thursday. Gov. Ned Lamont signed an executive order authorizing the extension out of concern the power outages might delay the mail.

Turnout at the polls was light, but the number of votes cast by absentee ballots that arrived by mail and were hand-delivered by voters to secured drop boxes were certain to set a record, said Secretary of the State Denise Merrill.

Voters were greeted at the polls by workers wearing masks and gloves. Some also were shielded by Plexiglas.

“The day went very smoothly in the polling places around the state,” Gabe Rosenberg, a spokesman for Merrill, said after the polls closed. “We had one very minor hiccup in Simsbury, when the power went out.”

Local officials were ready with a generator, and voting proceeded, he said.

A focus on Democratic seats

Republicans had primaries in two congressional districts, a state Senate District and three state House Districts, most in places where the GOP has little or no chance of winning in November.

The night’s curiosity was whether Thomas Gilmer, the party-endorsed Republican in the 2nd Congressional District, would win a primary over Justin Anderson. Despite withdrawing after his arrest in connection with allegations of domestic violence, he remained on the ballot.

Anderson, said he provided video and photographic evidence, obtained from the victim, to the police.

In the 1st Congressional District, May Fay of West Hartford was challenged for the Republican nomination by Jim Griffin of Bristol. No Republican has won in that district since Dwight Eisenhower was president.

The marquee Democratic race was in Bridgeport, the state’s largest city.

State Sen. Marilyn Moore, D-Bridgeport, who lost the party endorsement to Marcus A. Brown, a two-term city councilman, was trying to regain the nomination Tuesday in a primary hampered by her reluctance to campaign due to COVID. Unofficial results showed Moore with a 100-vote lead, with nearly 2,000 absentee ballots to be counted and more that could arrive in the mail Wednesday and Thursday.

Moore, 73, did no door-to-door campaigning.

“It’s been very strange,” said Moore, reached by phone after poll-standing, more or less incognito, in a mask. She literally kept voters at arms-length, hardly the standard posture for a politician on an election day.

“So we did it — masks, gloves, knock on the door, go six feet back and talk to the voters. It worked out, and I hope it pays off,” Brown said outside a polling station at Central High School.

Brown got the full advantage of being the party-endorsed candidate, which placed him on the top line of the ballot with Biden on a day when the former vice president made history by choosing Sen. Kamala Harris, a Black woman, as his running mate.

In Bridgeport, the organization behind party-endorsed candidates generally produces an advantage in the absentees. But the X-factor this year is that every registered Democrat and Republican was mailed an absentee ballot application for the primary by the secretary of the state’s office. Would that blunt the advantage of what is perhaps the state’s last political machine?

Democrats had contests for nominations in eight state House districts, with all but one in a district that is either Democratic-leaning or Democratic-dominated — meaning that the primary could foretell the winner in November.

Incumbents were challenged in four Democratic districts, while the other three were open due to the retirements of Reps. Joe Verrengia of West Hartford and Russ Morin of Wethersfield and Rep. Rick Lopes of New Britain running for state Senate.

The House Democrats facing primaries and their challengers were:

In the three Democrat primaries for open House seats, the endorsed and challenging candidates were:

There also was a Democratic primary in the 45th District between Mark DePonte and Pamela Patalano. Deponte won and will face Rep. Brian Lanoue, R-Griswold.

In the 17th Senate District, Jorge Cabrera was challenged by Justin Farmer for the Democratic nomination. Both are from Hamden. The winner faces Sen. George Logan, R-Ansonia, in what is expected to be a competitive race. Cabrera appeared to be winning, though results posted to the secretary of the state’s web site were faulty. It reported numbers from more precincts than exist.

Most of the Republican primaries were fights for nominations in what are certain to be losing efforts in the fall, but a notable exception was the contest in the 30th House District, a Democratic seat that the party has all but ceded to the GOP.  It is held by House Speaker Joe Aresimowicz, D-Berlin, who is not seeking re-election. He barely won two years ago against a lightly funded, last-minute challenger.

Donna Veach of Berlin, the party-endorsed candidate, was challenged this year by Jim Townsley of Southington.

There also is a GOP primary for the nomination in the 82nd District, also an open race due to the retirement of Rep. Buddy Altobello, D-Meriden. Mike Skelps of Middlefield was challenged by Ernestine Holloway of Meriden.

In Bridgeport, where the GOP has little support, there is a primary for the nomination in the 128th House District. The endorsed candidate, Joseph J. Borges, is challenged by Ethan Book. Both are from Bridgeport.

In the 26th Senate District, Kim Healy of Wilton was challenged by William Duff of Bethel for the nomination to challenge Sen. Will Haskell, D-Wesport, who unseated Republican Toni Boucher in 2018.

While Trump and Biden had clinched their presidential nominations, their opponents declined to formally withdraw.

Republicans had objected to Merrill’s decision to place Rocky De La Fuente on the ballot against Trump, a decision based on Connecticut’s statutory standard of deciding on a candidate’s credibility by press coverage.

By continuing, the challengers had some hope of winning delegates, giving them a voice at the nominating conventions. But those conventions now have been largely shelved due to the pandemic.

Unlike the free states Connecticut is cast a Democrat run State in the process of purging itself of any other political party. Those of us Republicans can only support the National party with the hope that upon winning they will provide a continuance of governing in accordance to the US Constitution and preserve the Founding And the Framers Enlightened intentions