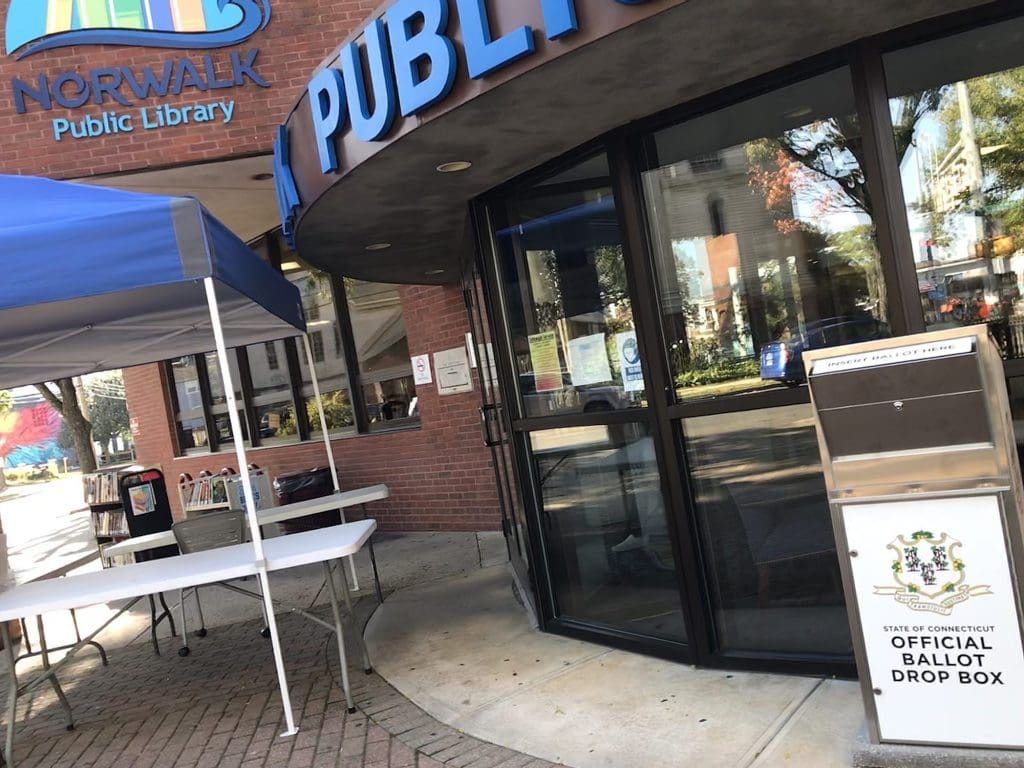 A dropbox for absentee ballots outside the Norwalk Public Library. There are also dropboxes at City Hall and at Norwalk Police headquarters.

Election day may be three weeks away, but the general election is unfolding right now. Around 3.7 percent of Connecticut’s 2.2 million registered voters have sent their ballots back to their town clerks as of the close of a tumultuous first week of October.

The Norwalk Town Clerk’s Office sent nearly 14,000 ballots to Norwalkers on Oct. 2 and had received nearly 5,000 ballots back as of the close of business Friday.

Since Oct. 2, town clerks across the state have been mailing out absentee ballots to the voters who have requested them. The officials now have 48 hours to mail out a ballot after receiving an application for one.

“The only statutory deadline for submitting an absentee ballot application is November 2 (the day before the election). Obviously, that contemplates handing in the application in person and receiving a ballot that day, something which may not be possible in many towns due to COVID,” said Secretary of the State spokesperson Gabe Rosenberg.

Norwalk has received 855 ballot applications since the mass mailing more than a week ago, a total 14,854 requests, according to stats provided by Rosenberg.

Ballots will be accepted until the polls close on Election Day, Nov. 3, at 8 p.m. They will be counted starting at 6 a.m. that day.

Voters have the option of mailing their ballots back to their town clerks or dropping them off in-person at ballot boxes in their area. When a ballot is mailed back to the town clerk’s office, it is considered first-class mail. Postage is already paid for by the state, Rosenberg said.

There was a little mix-up in Norwalk, as 1,000 ballots were sent without the postage paid indication. The Post Office will still deliver them to City Hall, even if no stamp is affixed, Town Clerk Rick McQuaid said.

The League of Women Voters reminds Norwalk that there are three dropboxes available:

Voters “should not delay in returning the ballots to the town clerks well in advance of the election,” said Anna Posniak, the president of the Connecticut Town Clerks Association and Windsor’s town clerk.

“It’s our top priority to do everything we possibly can to safely get people their ballot information” and to promptly return those ballots to election officials, said United States Postal Service for the Northeast Communications Manager Maureen Marion, adding that she recommends that voters familiarize themselves with local election deadlines.

The disparity holds in ballots returned to town clerk offices as well.

In Norwalk, the breakdown as of Friday evening was:

And of the 4,980 ballots that have been returned:

So, 39.12 percent of Norwalk Democrats have returned their ballots, 27.65 percent of unaffiliateds, 27.16 percent of Republicans and 34 percent of other party members. 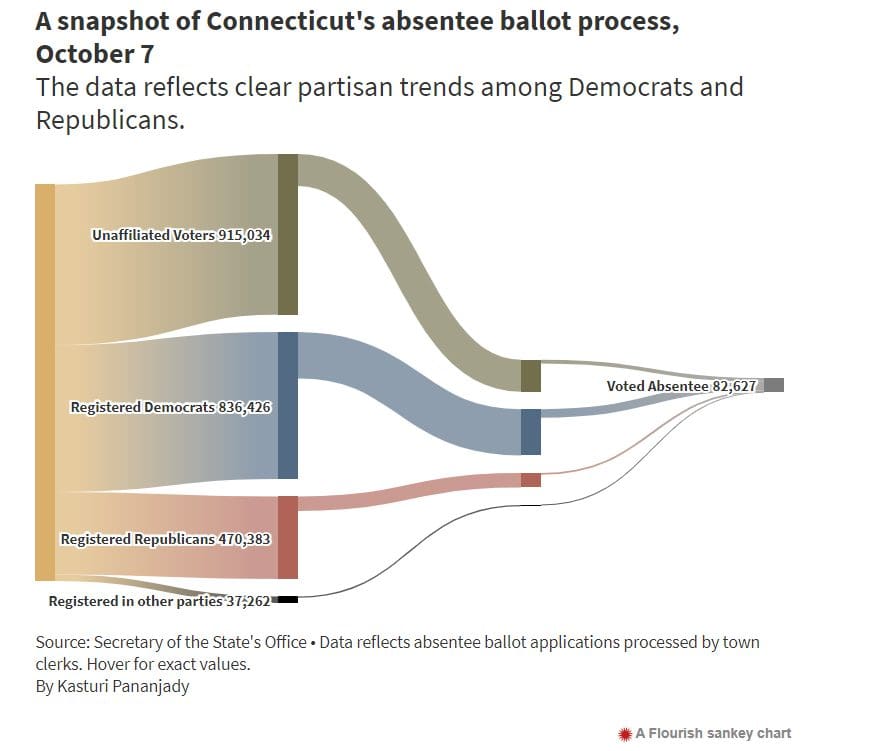 The New Haven Independent reported this week that some voters received the wrong ballot in the mail — an error spotted by residents on close inspection of the outer envelope, which lists the name and address of the voter. 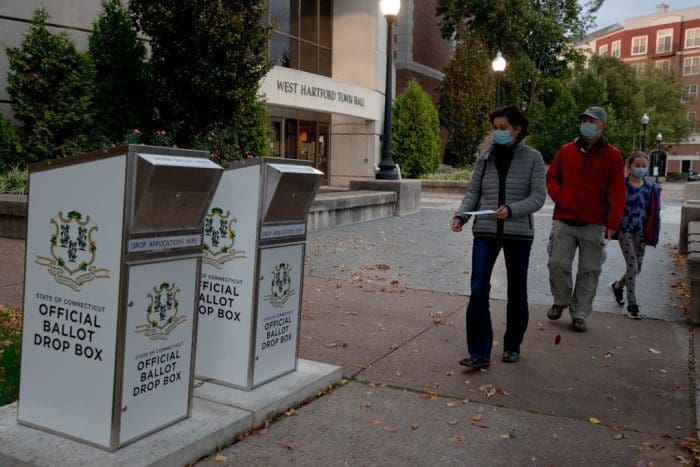 Essie Labrot, West Hartford’s town clerk, has received two ballots that cannot be counted because the people filling them out did not put them in the outer envelope. “I talked to a gentleman this morning who thought that because he put it in the box and didn’t put it in the U.S. mail, it wasn’t necessary,” she said. Without the outer, serial numbered envelope, she has no idea whose ballots she has. And she has no way of letting them know that they made a mistake.

Voters can look up the status of their ballot applications and ballots on this lookup tool maintained by the Secretary of the State’s website. If the voters get in touch with her after noticing that the portal hasn’t registered any updates, they could request a duplicate ballot, which would carry a different serial number from the first. In that case, the first ballot would be voided, Labrot emphasized.

Labrot has been telling her residents to send in a second application if they haven’t received a ballot within five business days of requesting one. There’s no real danger of receiving two ballots, she said. “What you worry about is people waiting until a few days before the election and then saying that they never got a ballot.”

Two Points:
1. People continue to register to vote, and newly registered voters are sent absentee ballot applications by the Registrar of Voters office. Over 2,100 have been sent out so far. The ballot drop boxes may also be used to return completed applications and completed voter registration forms.
2. Trying to vote twice, both in person at the polls and also by absentee ballot won’t work — and is a crime. It won’t work because every voter who submits an absentee ballot is marked as voting absentee on the official checklist used at the polls. Some absentee ballot arrive on Election Day, or late the day before — too late to be marked on the checklist. Those ballots are not counted until we verify that the voter has not also voted in person. This is done during Election Day and, for absentee ballots arriving very late in the day, may take until the next day.
Obviously it would help speed up counting if everyone voting absentee would send in, or drop off, their ballot early and not wait until the last minute. A lot of dedicated (and masked) absentee ballot officials have worked hard to protect the voters and the poll workers from COVID risks by reducing the number of voters who must go to the polls and this is costing a lot of money. Please don’t waste their efforts by throwing away your absentee ballot and going to the polls anyway. Everyone should have confidence that their absentee ballot will be properly counted — by a team of dedicated, trained, and bipartisan fellow Norwalk citizens.
Stuart Wells, Registrar of Voters

1- a voter certifies they are a citizen. How do you verify that’s correct.

2- a voter certifies they have not committed certain acts that make them ineligible to vote. Same general question- how do you verify the voter is eligible?

Well said Stuart with great information. The Voters should know that the interigity of Elections has always been paramount in the City of Norwalk. I commend you, your staff, and the Town Clerk on your excellent efforts to assure every vote is counted , secure, private and in custody.
Thank you all because you and all the staff are dedicated to preserve everyone’s vote.

God Bless and stay safe and healthy. You have made sure all voters do also.