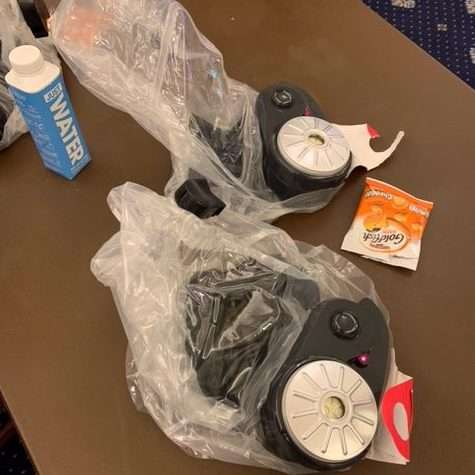 The first sign of trouble inside the U.S. House of Representatives on Wednesday came as lawmakers debated in a joint session of Congress whether to accept the presidential electors from Arizona, an element of Joe Biden’s victory over Donald J. Trump.

Aides appeared, ominously whispering to bosses. Then came the noises in the hall, quickly followed by uniformed police. A lieutenant commanded them to close the chamber’s large heavy doors.

“And that’s when it got a little strange,” said U.S. Rep. Jim Himes, D-4th District. “We briefly recessed, and the lieutenant came in and said, ‘We’ve used tear gas in the Rotunda. So please take out the gas masks under the seats and open them up.’”

Tear gas? In the Rotunda where JFK lay in state after an assassination that rocked America’s sense of political stability and continuity? It’s where Justice Ruth Bader Ginsburg and Congressman John Lewis, symbols of justice and civil rights, also were grieved last year.

Himes recalled a factoid from a long-ago orientation: Yes, gas masks are hidden under the chairs in the U.S. House of Representatives, just like there are life jackets under airline seats. He broke open the plastic bag containing the mask.

He was near U.S. Rep. Rosa L. DeLauro, D-3rd District. They were among the 11 House Democrats permitted to attend under a deal intended to limit exposure to COVID-19. Himes said it was a deal ignored by Republicans, who crowded the chamber.

The two Connecticut Democrats from neighboring districts were in the gallery, above and behind the rostrum, where House Speaker Nancy Pelosi, D-Calif., watched with House Majority Leader Steny Hoyer, D-Md. U.S. Rep. Jim Himes on the first of his three December webinars explaining the provisions of the pandemic relief bill.

“You could hear banging on doors. You could hear shouting outside. And at that point, they led more officers into the gallery, to the galleries and balcony overlooking the floor. They spread us out. And they evacuated the floor pretty quickly. They took the speaker and Steny off, and then the lieutenant came and said, ‘Get ready to crouch down behind your seats.’ It got a little tense.”

A woman was shot and killed inside the Capitol, but Himes said he heard no gunfire, only banging that sounded like a baseball bat taken to a door, the unmistakable noise of breaking glass, and a pop and whoosh that may have been tear gas.

Himes watched the police try to secure the doors. He was dumbfounded to watch them struggle to move heavy furniture as a barricade. He was in what is largely assumed to be one of the most secure buildings in the United States. He could hear mob sounds in the foyer.

“They were at the door to the chamber. They broke the glass,” Himes said.

The officers pointed their weapons at the door. Then came the word: Evacuate.

Himes was in a group escorted out the exit usually used by the first lady after the State of the Union. The hallway was crowded with police in tactical gear. Rioters lay facedown on the floor.

The members of Congress followed police down a utility stairway into the tunnel system beneath the Capitol.

Himes told this account Wednesday night from a secure room in a place he could not disclose. He had water and was able to brush his teeth to get the taste of tear gas out of his mouth. The room was crowded with members of Congress, all sheltering in place while police worked to regain control of the U.S. Capitol.

Himes, who is alternately praised and criticized for trying to work across the aisle, said he is trying to absorb what has happened and how so many House Republicans joined Trump in publicly suggesting that Biden’s election somehow could be undone Wednesday during a joint session of Congress.

“You know, mobs are nothing new. Mobs don’t surprise me,” Himes said. “But when a good chunk of a political party decides to aid and abet a mob in the service of chaos, and attacking our democracy, that makes me really sad. I mean, it’s just an awful moment.”

The president had goaded the mob. He even denounced Vice President Mike Pence as a coward for not stopping the process that would be the final procedural step before Biden’s inauguration. Nothing the president did surprised Himes.

“We’ve known Donald Trump now for four years. But it makes me very, very sad that so many of my Republican colleagues — some of them, by the way, are sitting across from me in a very crowded room, making a real point about not wearing a mask,” Himes said. “You know, it just makes me so sad that people will abandon their commitment to democracy and decency for a man like Donald Trump.”

As he spoke, the murmur of other voices could be heard, some undoubtedly who could hear Himes as he spoke.

At 6 p.m., he was told the Capitol was secure. Outside, the nation’s capital was under a curfew. Himes said they would be going back to work.

A sad day for this country when political terrorists invade the capitol. I hope that they are prosecuted to the full extent of the law.

Thank you Jim Himes for your report. I am glad you were led to safety. I am so very, very sorry you and your colleagues had to experience this dangerous and frightening mob attack. It breaks my heart for you and other representatives and for my Country. Take care.

Thank you Congressman Himes for your service to CT and our democracy.

It is easy to criticize Trump, but it is his ENABLERS and sycophants, who allowed this sad and seditious event to occur.