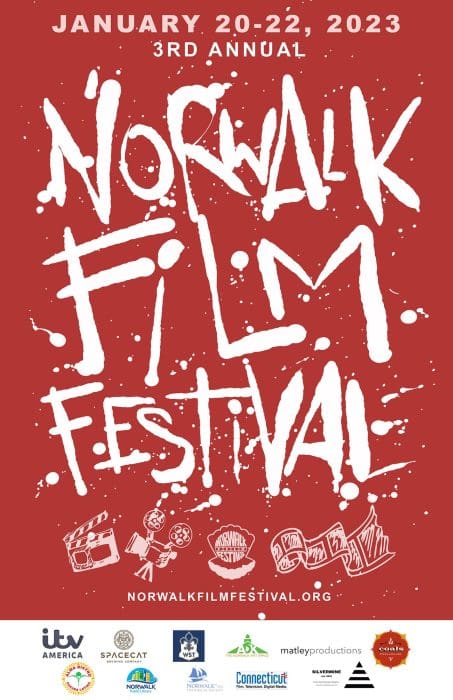 The Third Annual Norwalk Film Festival will be held at the Wall Street Theater and the Norwalk Public Library from Jan. 21-22, with an Opening Night party honoring the filmmakers held Friday, Jan. 20 at Space Cat. This year’s event will feature 60 films, curated from nearly 200 submissions by the festival’s Leadership team and local volunteers. The films come from talented filmmakers locally, nationally, and internationally, with genres ranging from documentaries, narratives, shorts, and more.

In addition to the screenings at the Wall Street Theater, professional panels and workshops will be held at the Norwalk Public Library main branch on Belden Avenue, just down the block. The discussions will feature opportunities for students, filmmakers, and the public to learn more about the craft of filmmaking. Also, a professional mixer will feature the chance for students and budding creatives to bump elbows and network with successful industry players.

The first two incarnations of the NFF have shown Norwalk is becoming a true filmmaker’s destination, with one of last year’s participants remarking:

“It was such an honor to have my short film screen at the 2021 Norwalk Film Festival. Seeing my film in such a beautiful venue as the Wall Street Theater was such a real treat… and even in the era of Covid, I still felt safe given the amount of care the festival team put into the weekend.”

Past NFF participants have been recognized in various ways since their participation, including winning awards and garnering national acclaim. In fact, the winner of the NFF 2019 Standing Ovation Award was Tony award-winning actor and Robin De Jesus, who was raised in Norwalk. Recently, De Jesus received national and critical acclaim for his role as

Michael in the 2021 film “Tick, Tick … Boom,” directed by Lin-Manuel Miranda and starring Andrew Garfield. Last year’s Standing Ovation Award winner, documentarian and professor Oscar Guerra, has gone on to win an Emmy for his work with PBS Frontline.

We are honored to present this year’s Standing Ovation Award to Norwalk born-and-raised TV and stage actress, Brennyn Lark, who has had a recurring role on ‘The Marvelous Mrs. Maisel’ and was most recently featured on Broadway in the musical, ‘Six’. The award presentation will be on Sunday, Jan. 22 at the Wall Street Theater.

Importantly, for the third year in a row, NFF has received corporate, individual, and organizational sponsorship as well as support and funding from the Connecticut Office of Film and Television, under the Department of Economic and Community Development. Such diverse support speaks to strong recognition about the value of art and culture to the vibrancy of the community, and to the power of storytelling through film to connect people.

The Norwalk Film Festival was founded by and operates with a grassroots community of volunteers comprised of filmmakers, cultural leaders, and movie lovers living and working in Norwalk. The festival leadership believes that cultural equity is a key component to long-term viability of a diverse and thriving artistic community. The goal of the NFF team is to bring together local communities and stimulate ongoing dialogues generated by the power of cinema.

We hope you can attend this year; expect a great event with even better films. Support independent filmmaking!

For more info and the evolving schedule, please visit the festival website at https://www.norwalkfilmfestival.org/. Email the NFF at [email protected] if you would like to volunteer or receive information about sponsoring the festival.

Tickets for this year’s festival are now available here, with discounted pricing for students.

Justin Matley is on the Norwalk Film Festival Leadership Committee and is a Chapman Hyperlocal Media Inc. Board member.