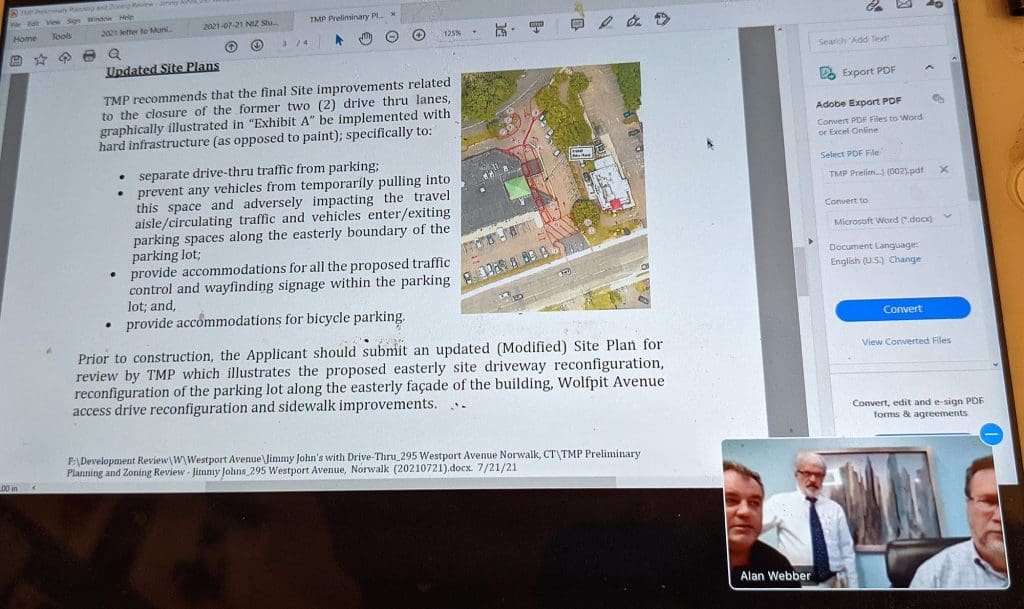 NORWALK, Conn. — Jimmy John’s is proposing to open its first Connecticut location in Norwalk along Westport Avenue, but concerns about traffic backups onto the main road have left the application stalled.

A July 21 memo from Jim Travers, Norwalk’s director of Transportation, Mobility, and Parking, and Garrett Bolella, assistant director for transportation, listed concerns about the proposed site plan, which is located at a former bank with an existing drive-thru.

“TMP remains concerned with the potential of vehicle queuing for the drive-thru window/lane for the sandwich shop impacting the roadway,” the memo read. “Specifically, the drive-thru’s accommodation of only a three (3) vehicle queue from the menu board/speaker location to the internal travel aisle of the shared parking lot before adversely impacting internal circulation and potentially causing spillover of vehicles onto Westport Avenue.”

Alan Webber, CFO for M.F. DiScala & Company, owner of the shopping center that the Jimmy John’s is proposing to move into, pushed back on that characterization, stating that three cars could be served at a time while there was room for a total of five cars to line up in the drive-thru, and a total of at least seven cars to fit on the site before anyone would come close to backing up onto Westport Avenue.

Mike Galante, the project’s traffic engineer, said that this project is very different from the Chick-fil-A issues on Connecticut Avenue.

“We differentiate ourselves from other sandwich concepts by being what we call ‘freaky fast and freaky fresh,’” said Will Roth, the franchisee of Jimmy John’s. “We are able to be so fast with a simple menu and unique operating procedures.”

Still, Commissioners and Steve Kleppin, the City’s director of Planning and Zoning, had some concerns about the existing plans, particularly the entrance/exit off of Westport Ave. that was closest to this end of the building that Jimmy John’s plans to occupy. 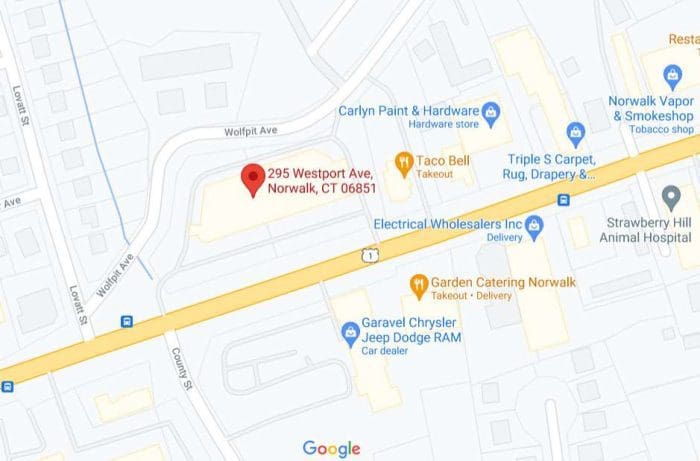 Jimmy John’s is looking to open a franchise at 295 Westport Ave. (Google)

“I think the last thing that you guys want, that Jimmy John’s wants and definitely the City or the Commission wants, is to have incidents like we had at Chick-fil-A and that’s going to do nothing but get bad press for all parties involved,” Kleppin said. “So I think that’s our main goal. And as much as we understand the model is different than some of the other establishments you mentioned, I think anytime there’s something shiny and new, people are drawn and attracted to it. And if the product is as good as you indicated, I tend to think that that will mean you’ll have a robust business. So I think we want to make sure that it functions and you do great business, but there’s no backup impediments on Westport Ave.”

The proposed solution from Transportation, Mobility, and Parking was to make the entrance/exit off of Westport Avenue exit only, keep the driveway off of Wolfpit Avenue as entrance only, and then keep the existing second entrance/exit off of Westport Avenue the way that it is. This would reconfigure the drive-thru and allow for more cars to fit on the site by wrapping them around the building.

Webber pushed back on the idea of getting rid of one of the two entrance/exit sites off of Westport Ave., stating that it would be a detriment to the existing tenants and potentially an issue for emergency access.

“And just having a one, essentially, one entrance on the westerly side of the property is something that until we know there’s a problem (with Jimmy John’s), we don’t think is something that is that makes sense for the rest of the shopping center,” he said. “Most other shopping centers around —they have two main accesses on the main road. And we just feel that it would be more of a detriment than anything—when we don’t think there’s going to be a problem with the drive thru to begin with.”

Webber said that if it did get busy on a singular day, Jimmy John’s has the ability to close its drive-thru immediately, which would require people to come and park their cars if they wanted to get a sandwich. If it became a persistent problem, he said they would reconfigure the site the way the city suggested and pay for a police officer to help with traffic until that was done. However, Webber emphasized that they didn’t want to just shut that entrance/exit from the start, because they believed it would hurt other businesses.

“If we don’t have that entrance, somebody’s going to say, ‘this shopping center is really inconvenient to get in and out of, and I’m going to go to the dry cleaner in the other shopping center of the street, or I’m going to go to the other nail place, I’m going to the other sandwich shop,’” he said. “And frankly, I don’t know if I would take the chance of having Jimmy John’s come in there if we were taking the chance of damaging the rest of our tenants with something that we don’t know that it’s going to be a problem.”

He continued: “If Jimmy John’s is doing that much of a gangbuster business, God bless them. And then it’s that many more people come into our shopping center, that this becomes a real problem, then at that point, we would commit to doing it because we know that they are a success, and people are going to continue to come into the shopping center. But right now, when we don’t feel that it’s going to be a problem…we know it makes the shopping center worse.”

Kleppin said that from their side of things, this could become a problem quickly and then he and his staff could face blowback.

“So it’s a Friday afternoon at one o’clock, and there’s 10 cars backed up on Route 1 and the police chief’s calling me, ‘why the heck did you approve this? And what’s going on here?’” he said. “I’m getting calls and complaints, then what happens?”

Kleppin and the team from the shopping center and Jimmy John’s agreed to have a meeting with the City’s Transportation, Mobility, and Parking team within the next two weeks to see if this could be resolved and then the plan could potentially be approved at the Zoning Commission’s first meeting in August.

Don’t recall the same issues being brought up about Popeye going into the old Burger King further down Wedport Ave..where there are comparable issues with multi shops banks and busy strip malls. That is going to be a worse situation as Popeye is a much more popular restaurant then this one. BTW over crowding of multi apartment complexs cause more headaches as do no one obeying traffic or speed laws in this town

I think all that is needed is a donation to a certain political campaign and it will all go away!