Thomas is vying with Republican candidate Patrizia Zucaro for the seat held by Republican Rep. Gail Lavielle for a decade. Thomas is a Norwalk resident and Zucaro lives in Westport.

The American Federation of Teachers cited Thomas’ “long-time commitment to the public sector, and her focus on education and healthcare” in announcing her endorsement.

“The decision to endorse your candidacy was made because of your commitment to working families and advocating for issues that are important to AFT Connecticut’s members,” Teri Merisotis, the Legislative Advocate of AFT Connecticut, is quoted as writing to Thomas. “Clearly, this election is very important to the people of Connecticut. We need strong

leadership that will help turn this State around and your election is a critical part of this.”

“With the pandemic wreaking havoc on both our healthcare and educational systems, Thomas has made access, safety, and affordability in both these sectors a top priority of her campaign. While keeping pressure on insurance and drug companies, Thomas notes, ‘healthcare must be affordable and accessible for everyone, at your doctor’s office, but also at your therapist’s office. Mental health has long been neglected, but we cannot afford to let the mental health impacts of this crisis go unaddressed.’ Recognizing the value of a well-run public school system for students and the community alike, Thomas says, ‘I would not be where I am today without the benefit of a strong public school education. We have some of the best schools in Connecticut and I will advocate for the funding that our district needs to educate all of our students during these challenging times, while keeping school workers safe.’”

A ‘commitment to reproductive justice’ 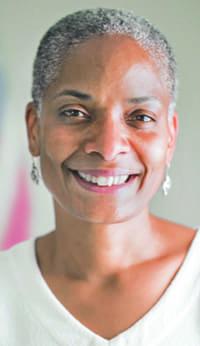 “We are excited about your commitment to protecting and expanding reproductive freedom, and look forward to your involvement in working to make Connecticut the best state in the nation by advancing proactive, pro-choice policies,” Kayla Reasco, Board President of NARAL Pro-Choice Connecticut Inc., is quoted as saying, in endorsing Thomas this year.

“My commitment to reproductive justice —including a woman’s right to choose —is unwavering, long-held, and more important than ever,” Thomas is quoted as saying. “I will fight to ensure that reproductive rights and services are accessible to ALL Connecticut women, and challenge the groups that harass and threaten patients and providers, courts that are seeking to undermine Roe v. Wade, and insurance companies and employers that seek to restrict health care services.”

And, “I’m deeply honored to receive this vote of confidence from Planned Parenthood Votes,” Thomas is quoted as saying. “When I had no other option for health care in high school and college, I received high-quality, free gynecological care and health check-ups from Planned Parenthood and know firsthand how important the agency is for low income women and communities of color.  On my first day in Hartford, I will support funding for family planning to prevent unintended pregnancy and sexually transmitted diseases. These are smart, low-cost investments that can prevent far greater costs and consequences in the long term.”

‘A ton of reasons’

‘I am proud to receive the endorsement of Lt. Governor Bysiewicz, State Comptroller Lembo, and State Senator Will Haskell, and look forward to working closely with them once elected to advocate for the needs of small business owners, for funding to protect the quality and safety of our schools, and helping to position Connecticut as a 21st Century economy,” Thomas is quoted as saying.

“Stephanie is a successful small business woman, community activist, public servant, and nonprofit leader. Everything she’s achieved in her life is the result of her hard work, persistence, and her ability to work collaboratively with people of diverse backgrounds,” Bysiewicz said, according to the press release. “Stephanie has a plan to improve her district and our state’s economy by investing in infrastructure and public transportation, improving our community colleges, and attracting and retaining our small businesses.”

“There are a ton of reasons that I really admire and respect Stephanie Thomas…Stephanie knocks on every door — not just the democratic voters, not just the unaffiliated voters, she would go up to a household that has her opponents’ lawn sign in their front yard just so that she can introduce herself and let them know that if she wins she would be their state representative too, that she would be accessible and most importantly, that she has a vision for how to move Connecticut forward. Now more than ever during these really difficult times, we need Stephanie’s vision in Hartford,” Haskell is quoted as saying.

“Stephanie brings the right heart and right head to work that is complex, but also demands that we have an underlying empathy for the people that we are here to serve,” Lembo is quoted as saying. “I met Stephanie first advocating for healthcare…for all people, and knew in that moment that she’s someone that I needed to know better and wanted to work with more. So I hope you will join me in supporting Stephanie Thomas. She will be a great representative for you in Hartford, and I look forward to working together with her closely once she gets there.”

“In Hartford, Thomas will fight for relief for small businesses and nonprofits to help keep them alive and our community vibrant during the Covid-19 pandemic,” the release said. “Creating more affordable healthcare options for small businesses is a key part of this plan, and ensuring that women’s healthcare is protected in these plans is a top priority.”

Zucaro has been endorsed by the Norwalk Police union, the Independent Party and NFIB (National Federation of Independent Business).

OH Goody! You have ben endorsed by all Democratic Left Wing organizations and Democratic elected officials all up for and will probably loose re-election. Yes that is something I would really not be to proud of. That endowment should have been a given. But what I find interesting is who hasn’t endorsed you like our own community police unions that have endorsed Democratic Candidates for as long as I can remember. And why is that Steffanie? And for the record I find it even more concerning that the AFT would endorse you but not an award winning almost 20 years educator that has devoted her career to teaching our children and making education better!

Elect Stephanie Thomas who I know personally, and who is an awesome human being of solid moral character who cares deeply about all of us, liberal and conservative and everyone in between!

She is on the right side of history and social justice on all the important issues, from healthcare to the environment to education to voting rights to women’s rights.

Vote Row A, Democrat, for the entire awesome Democratic slate with Biden/Harris at the top and all federal, state, and local offices.