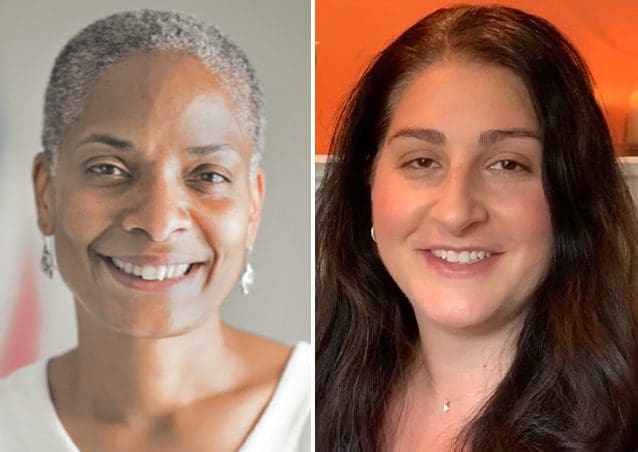 NORWALK, Conn. — The League of Women Voters of Norwalk invited all candidates for State Senate and State Representative in Norwalk’s districts to submit responses to a six-item questionnaire, a photo, and a campaign URL. Here are the answers from Democratic State Rep. candidate Stephanie Thomas and Republican State Rep. candidate Patrizia Zucaro, who are competing to represent District 141.

“I’m fortunate to have had three careers in one. Working in the nonprofit sector has taught me the importance of solving the most intractable problems, on budget, with evidence-based data to back up the results. As a fundraising and strategy consultant for over two decades, I have been tasked with coming up with creative solutions when other plans have failed. I must listen closely and build consensus, cutting through the politics of various stakeholders to find win/win solutions. As a small business owner, I know there are no shortcuts for hard work, transparency, and fair dealing. I have to remain responsive to my environment to solve problems effectively. And most importantly, I have to invest in both my team and in growth opportunities to really thrive. I will listen first, ask questions, work to build consensus, but make tough decisions; and serve as your proactive voice in Hartford.”

“As an attorney, I am very familiar with Connecticut statutes, the responsibilities of the three branches of government, and the lawmaking process. In reviewing bills, I can quickly sift through legalese and understand the implications of detailed proposals. I’ve successfully defended small businesses and individuals in a range of complex situations, and I am ready to do the same for constituents. I’ve managed my own practice, so I understand the issues small businesses face very well. I also know our district well. I’m a Westport native, and I’ve lived in Fairfield County my whole life. I’m sensitive to the similarities and differences between Norwalk and the two smaller towns of Wilton and Westport. This is my home, I care about these towns and the people who live here – not about political ideologies. I’m not afraid of anything, and I’m ready to make sure they have a forceful voice in Hartford.”

“While recognizing that there are strong feelings regarding this issue, I wholeheartedly support the police accountability bill. From the beginning, this bill was crafted with bipartisan support and then vetted in public forums, including a 12-hour public hearing. Unfortunately, just before the scheduled vote, Republicans responded to right-wing pressure and voted against it. Nonetheless, the bill passed and includes critical measures like permitting independent investigations of deadly police shootings, encouraging more minority recruitment so our police departments’ composition mirrors our local communities, allowing for public review of police discipline reports and mandating and providing funding for body and dashboard cameras. While some of these elements are controversial, I believe their enactment will improve the trust between communities and our all-important police forces.”

“I know the law enough to know that any complex bill has parts that I – or anyone else –support, and others I oppose. There are provisions of this bill I support, for example, those that provide enhanced training, use of cameras, etc. But others have implications that I don’t support as written, because they are likely to make recruiting good officers more difficult and to diminish the ability of local police to keep our communities safe. During legislative debate, even the strongest proponents said the bill would need “fixing” after passage. Nevertheless, they rushed it through without a properly noticed public hearing, and without legislative committee scrutiny. I believe the wisest course would have been to raise the bill in January, and to work all session to produce legislation that didn’t need “fixing”, and would have helped our police officers keep everyone safe, while respecting the rights of all individuals.”

“I do not believe that affordable housing can be legislated on a state-wide basis given Connecticut’s diversity of rural areas, suburbs and cities. However, we do ourselves harm if we stop the conversation there. Seniors, young people, the recently divorced, small business owners and employees are clamoring for diversity of housing stock. They don’t want to leave the district, but cannot afford to stay. Growing our tax base, helping local businesses thrive, and encouraging residents to stay are good for our economy. The formula for success is for municipalities to pro-actively decide what type of usage makes sense in which locations. Happily, our district is already grappling with this important issue, but we should consider asking the state for land use training for volunteers on local P&Z boards and case studies on what has worked elsewhere so our local boards have the tools and information to help.”

“The need for more and diversified affordable housing is well recognized by the 143rd district towns. Norwalk has many options, but Wiltonians and Westporters want more. They are taking action – not to comply with state law, but because they think diversified housing stock will offer residents more options and attract new residents. I agree. The question is: who makes the necessary zoning decisions? I believe they should be made by local people who are accountable to local residents. While I absolutely agree that many small towns need more affordable housing, I believe 8-30g isn’t an effective framework and needs substantial reform. It makes it virtually impossible for small towns to reach the 10% goal; benefits developers, not residents; leads to costly litigation; and denies local officials the ability to approve affordable housing locations and to set requirements for aligning it with local architectural, environmental, historic preservation, landscape, and accessibility guidelines.”

“The state should only insert itself in areas where it can be helpful, like articulating best practices and providing incentives to achieve objectives. That said, we need to recognize that while legislation can be a lever for change, it cannot be expected to do all the heavy lifting. For example, dismantling systemic racism at the institutional level is a huge task and will take some time. Legislation can help, but if, for instance, it mandates that children can be bused to a nearby high performing school district, then we don’t have to do the work of thinking about why the curriculum is so skewed to white culture or what happens to the children left behind. Legislation can help nudge us in the right direction, but we need to have real conversations with each other at the local level so we can solve difficult issues.”

“I support local autonomy and control over local issues. Take education. This fall, the state provided guidance on reopening, but left districts flexibility in implementing it. Local boards of education in Norwalk and elsewhere were able to design programs that fit their communities. Parents, teachers, and students were involved in the decision process and the result benefited the community. A few years ago, the state mandated that every school district follow a regional calendar. This was repealed, because coordination didn’t work, and there were no savings. Regarding the environment, Westport had to fight to be able to enact its own plastic bag ban, and other towns would like to enact environmental ordinances more rigorous than state laws. Planning and zoning matters should also be decided locally. One-size-fits-all mandates don’t work well. Local decisions should be made not by state bureaucrats, but by local people who are accountable to local residents.”

“Yes, I will support the effort to increase voter access. Providing more pathways for voting is the first step to ensuring that our democracy reflects the wants and needs of its citizens. Connecticut has some of the most restrictive voting laws in the county and this must change. Exercising our right to vote shouldn’t be in jeopardy if one gets called away on an unexpected business trip or wakes up to find a sick child which keeps you at home, or you have an opportunity to work a double shift which can help you make ends meet. We need a system that makes it easier for residents to vote that includes no-excuse absentee ballots, online applications to request an absentee ballot, early voting, and Automatic Voter Registration. Let’s join the majority of the country in ensuring safe alternatives for our electorate.”

“The state must remain flexible and responsive to business needs in these rapidly changing conditions. Building consumer confidence is key to our economic recovery. We must also maximize every opportunity to bring federal dollars to CT. Taxpayers are at the breaking point – we need to take a comprehensive look at tax codes and budgets through new eyes. There are many ideas out there to be considered.

“Looking forward, individuals are already moving here, but we need to extend that trend after the fear of COVID-19 dies out, consider what industries we can encourage, and work cooperatively with Advance CT to bring businesses to our area. We must ensure that our roads and mass transportation system is viable and reliable, and that our infrastructure is up to the demands of the 21st Century. Sometimes you must invest to see growth; we must look at where we can invest smartly.”

“We must continue to balance data-driven public health imperatives with economic and social considerations, and the legislature must be included in this work with the governor from now on. Safety must remain paramount. We must help businesses, especially small businesses, recover and grow by creating the most hospitable regulatory, administrative, and tax environment for them, with as few onerous mandates as possible. Another priority is for the legislature to act quickly to allow local school districts at least temporary flexibility on calendars, curriculum, and formats to help students and teachers catch up and move forward after months of distance learning. While the pandemic has taken center stage, Connecticut’s other fundamental issues haven’t gone away. We must restore state finances by cutting wasteful spending, paying off mounting debt and unfunded retirement obligations, and reducing taxes, while investing in infrastructure and social services. Increasing Norwalk’s ECS funding remains a top priority.”