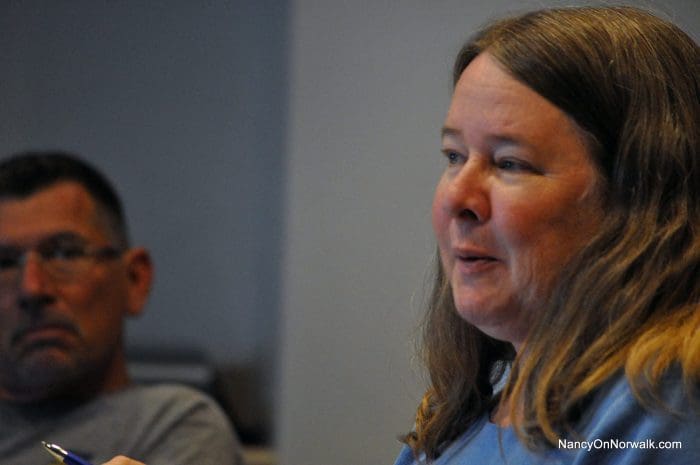 What is Title IX? It is a section of a law passed by Congress on June 23, 1972, called the Education Amendments Act of 1972. It prohibits discrimination based on sex (gender) in any school or educational program that receives federal money. In short, no discrimination against girls in public schools and most universities. The law received perhaps the most attention when it came to girls’ sports.

Many of you know that I am an attorney whose professional career has revolved around Title VII (part of the 1964 Civil Rights Act that prohibits discrimination in employment), and while working in Norwalk for the last 26 years, Title VIII of the Civil Rights Act of 1968, the Fair Housing Act, prohibiting discrimination in housing-related transactions (renting, buying, lending, advertising, etc.).

So why do I write about Title IX today?

In 1972 I was in ninth grade and on the high school swim team. Our high school, White Plains High School, has the colors orange and black – we were White Plains Tigers. Our bathing suits were orange and unlined. As you can imagine, once wet, the suits were see-through. We might as well have been swimming naked.

While this attire meant our swim meets were well attended by high school boys, we wanted lined swimsuits. Somehow, I ended up being the person to go talk to the principal about getting new swimsuits. While I don’t remember very much about being a 14-year-old girl, I do remember that conversation. In summary, he told me that no, the school wasn’t going to spend any money on girls’ swimming, it would be saved for the more important sports, sports that brought in money to the school, such as boys football, track and field, etc.  I remember this so clearly.

And then the news hit that Title IX had passed and was law. I think it was likely the following September, when I was on the swim team and also a reporter for the school’s newspaper, that I volunteered to write a story for the school newspaper about Title IX. Of course, the local experience would be most impactful, so off I went to interview the principal. This time, when I asked about getting lined bathing suits for the girls’ swim team, the answer was “Yes”!

The power of law. The power of anti-discrimination laws, in particular. A small matter, swimsuits for the girls’ swim team, nowhere near as important (except to 14-year-old girls) as employment discrimination or housing discrimination. But along with everything else happening in the country during these tumultuous years of the late 1960s and early 1970s, I could see that law could change lives for the better.

Interestingly, equal pay for women in sports is still not a fait accompli, 50 years later. As we all saw last month, the U.S. Women’s National Soccer team settled a lawsuit brought because they were paid less than the men playing for the U.S. Men’s National Soccer team, despite winning more games. Fifty years after the passage of Title IX, the women achieved pay equity, at least in U.S. Women’s Soccer. There is no equal pay act for women outside of federal employment, so today, women in the workplace still earn less than men doing the same job, even if doing it better, like the women’s soccer team. In the general workforce, women earn $0.87 (87 cents) for every $1.00 men earn. These were the numbers in 2021.

The law is the beginning of change. Implementing the law takes time. It is rare, like my high school swimsuit experience, that inequities are changed quickly.

In 1973, we got our lined bathing suits (which I’m sure didn’t cost very much), only because of Title IX and challenging authority appropriately. This was a lesson that clearly impacted my entire life.

It’s great that Title IX exists. I can’t help but think of how Leah Thomas can swim as a woman. Of course it’s “only” woman’s college swimming. This will get heated when Lebron James is transgendered and scores 200 points for Western Connecticut agains UCONN.

While we’ve made some significant societal progress on the more overt forms of discrimination we’ve not made much progress on narrowing the income/wealth disparities amongst our population. Here the challenge is providing reasonably comparable public school and college education across various cultural/ethnic groups. For example, both Black and Latino groups are woefully under represented in hi-tech/computer industry employment. A reflection of lower public school achievement and limited securing technical college degrees.

Norwalk – a multi-ethnic diverse City – is a good example of the challenges. While a relatively small number of students secure access to highly rated colleges most students fail to ever secure 4 yr college degrees. And most fail to meet CT Dept of Education graduation standards. So far community leaders – BOE, Common Council, Mayor’s office – have no public plan for remediation save ever higher budgets.

Nor is there any enthusiasm for the fairly obvious remediations. Such as longer school days for under performing/non-English native speaking students, mandatory summer school and holding back students till they meet grade requirements.

Much of nearly New York City’s historic success in attracting new immigrants was its robust and demanding public school system and City College open to all students. High standards not only attracted new immigrants but provided a highly trained work force. That Norwalk remains CT’s only City without a 4 yr college illustrates our “educational enlightenment”. Sadly its our school kids who remain disadvantaged.

While I agree with most of the above I question where swim team parents were in 1972? If my 14 year old daughter was wearing a see thru bathing suit I would be damn sure to address that with high school administration. I would’ve felt that way in 1972 or even 1922.
It always baffles me when people argue a very good point, but embellish the point to make their point ineffective.

The gender pay gap is a myth this has already been debunked. Stop spreading misinformation. It is not a fact that women are paid less for the same job, it is different jobs and educational attainment!

“”””Why does a gender pay gap still persist?

Much of this gap has been explained by measurable factors such as educational attainment, occupational segregation and work experience. The narrowing of the gap is attributable in large part to gains women have made in each of these dimensions.””””

“””””Even though women have increased their presence in higher-paying jobs traditionally dominated by men, such as professional and managerial positions, women as a whole continue to be overrepresented in lower-paying occupations relative to their share of the workforce. This may contribute to gender differences in pay.””””