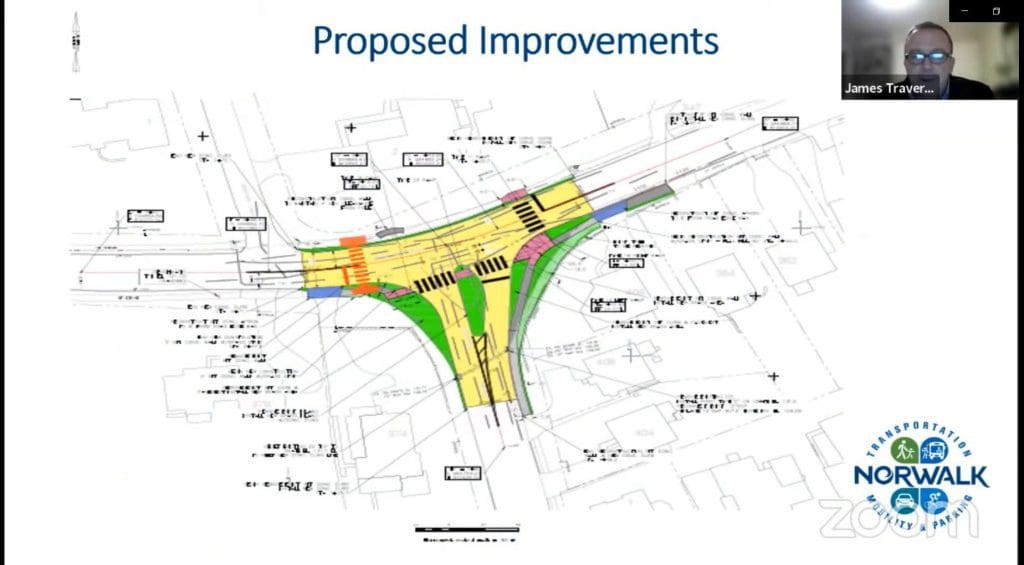 NORWALK, Conn. — In yet another planned traffic improvement, the Department of Transportation, Mobility and Parking is looking to upgrade the intersection of Flax Hill Road and Highland Avenue.

An information session held Tuesday drew objections from one nearby neighbor and a plea from another, who said it’s almost impossible to exit his small side street.

The intersection needs work, with 17 crashes reported there between 2016 and 2020, two of them resulting in injuries, TMP (Transportation, Mobility and Parking) Principal Engineer Mike Yeosock said. There was also a fatal crash in 2014.

It’s been on the radar screen on and off, with the then-Southwest Regional Planning Agency doing a Safe Routes to Schools study in 2009 and then in 2012, consultants putting together a city-wide Transportation Master Plan interviewed the Flax Hill Neighborhood Association, Yeosock said.  Out of those efforts, Safe Routes to School work was done between Witch Lane and Knollwood Road, and now phase II is about to address pedestrian safety between Charcoal Road and Meredith Court.

Director of Transportation, Mobility, and Parking James Travers explained he’s been on the job for about nine months and one of the first things he and Assistant Director for Transportation Services Garrett Bolella did was to look at grant funded projects, and see if they could be moved along.

“I knew that we had a Safe Routes to School grant for Highland and found this intersection. My first trip out there I have to say I was very confused,” Travers said. “I paused as I think many people do who are relatively new to the intersection.”

The federal Local Road Accident Reduction Program, administered by the Connecticut Department of Transportation, will pay 90% of the $375,000 cost to make TMP’s preferred alterations at Flax Hill and Highland, reducing the angles handled by drivers while keeping the center island thought to be a neighborhood gateway, Yeosock said. Data supports the plan to “tee up the intersection,” as 15 of the 17 recent accidents happened in clear weather, and 10 of them were between 8 a.m. and 4 p.m. About 59% were rear-end collisions.

“It is a good project to look at to improve mobility and to improve safety,” Travers said.

Travers said he and Bolella were in the area Tuesday during dismissal time for the nearby Brookside Elementary School and “what struck me the most…was the amount of times that horns are beeping, right, which is a clear indication for us that there’s a problem. And I think we as transportation professionals have an obligation to look at opportunities to improve safety on our roadways.”

Not only does maintaining the island keep the neighborhood’s feel, but, “that’s also another unique opportunity for us to potentially plant really large trees that will grow to become the gateway and really have that as the as, you know, a grand entrance into the neighborhood,” he said.

“We’d really like to tie this in to a much larger project and much larger betterment of the neighborhood,” Travers said.

Transportation Planner Greg Pacelli explained that the Safe Routes to School phase II will install .7 miles of sidewalks, “ADA complaint ramps and crosswalks at all major driveways, especially at the schools, and also intersecting roadways as well throughout the entire length of the corridor.’

He said, “And on top of that, we’d also add some sidewalk segments on the southern travel lane approach as well, where we would add some ADA compliant ramps as well to get those who are coming from Devil’s Garden for instance, coming across and crossing the street onto Highland, to get them onto a sidewalk as well.”

A flashing beacon is also planned to slow traffic and help pedestrians cross the street, he said. It’s all been funded.

Scott Teed, a Westview Lane resident, said he and his neighbors “find it impossible to get out of the street,” just east of the Flax Hill/Highland Avenue intersection

The position of the stop sign means that they can’t take a left or right out of their street unless drivers allow them to do it, he said. A driver once fell asleep at the wheel, missed the island and smashed into his garage door.

Lisa Wilson Grant said she’s lived a couple doors down from the intersection for 20 years and she’s “never seen a collision” there, except for stopping cars getting rear ended.

“I think right now, it’s almost like a roundabout where people go. The only issue I have is sometimes people don’t stop and they go two at a time,” she said, suggesting a sign to discourage drivers from doing that.

Grant, a historian, said the “historic, graceful curve” dates to the 1600s and “I think the footprint of the way it is, is significant to the history of Norwalk.” Nathan Hale “came down this road on his fateful mission where he left Norwalk and went to Long Island Sound” and “George Washington came down this road.”

She predicted the planned changes would lead to more congestion and more emissions as cars idle.

Yeosock said TMP “strongly feels” the intersection will be improved “by tightening up the distance between the two approaches,” allowing cars to “get through there more quickly” and “less delay” due to “less driver confusion.”

Construction would begin next summer. TMP is accepting comments about the proposal through Dec. 15. Email [email protected] or contact Customer Service at 203-854-3200.

Lisa mentions a roundabout and as I recall there were plans developed to make it one. That would eliminate the issue completely. Good idea to relook at those plans….where are all the yellers these days?

You should consider a round about for this intersection and do not plan any trees. The trees would block the sight line and make it impossible to see the cars on Flax Hill that are turning onto Highland. Any pedestrian cross walks need to be away from the corners and yes that means people will have to walk farther to cross these streets

There’s no room for a round-about that could accomodate anything ezcept Smart-car sized vehicles. Leave it alone. Never have seen a crash there in 26 years. Chsnge the yield signs to stop signs. Imaginary problem solved.

Like this plan, a roundabout would require expanding the area by taking a small amount of land. The accidents are either real or they aren’t. I’ve never seen an accident on 95, but I’m pretty sure they happen. I’d trust the NPD info

Don’t often agree with anybody on this site. I use that intersection many times a day. Never have a problem, drives are uniformly courteous in sequential traffic flow. That said, thank you Mr Cavallo.

The City went through this dog and pony show about 7-8 years ago and it was shot down in a meeting with about 10-12 neighbors and a representative from the CT DOT at City Hall. All the residents were asking the same question, “so why are you proposing this?”.
There is absolutely nothing wrong with this intersection. In fact, it is one of the last interesting intersections left in the City. No offense to engineers but this is what happens when they are left to redesign our City, total lack of aesthetics. They are turning this in to another “hammerhead” intersection, and that is a pathetic excuse of an island, to “keep the gateway of the neighborhood”. To qualify myself to comment on such things, I’ve been a Landscape Architect for close to 20 years with experience in Urban Planning. I know exactly what will happen, in 2-3 years when the City keeps forgetting to cut the grass there, or weed, they will come in with concrete and just fill it in. Lovely!
To go back to the meeting they had a few years back, the City claimed, I think it was about 20-25 accidents. The funny part about that was that their own map actually showed all the accidents either at Flax/Scribner, Flax/Rampart/Michael, and Flax/Keeler. In fact, again according to their own information/map, the ONLY accident at this intersection was a 1 car accident at about 12:30 at night! It was more of an area map than site specific. I grew up in Rowayton and currently live about 100 yards from this intersection and have never, ever seen an accident here in the thousands of times I’ve passed through it.
What I also find funny is that Travers and Bolella visited the site as school was letting out and heard horns! Really?! I would’ve never that thought that as dozens of cars exit a school all at the same time and generally go in 1 of 2 directions that a couple of people might actually use their horns. Shocking!
I actually walked this intersection with Tom Livingston years ago and explained to him why I thought the it worked fine, or even better than what was proposed, and made a few suggestions (i.e. additional stop sign as you come off Highland in to the triangle, a speed hump or raised intersection (all effective traffic calming devices).
I find it interesting that Travers has been on the job for 9 months and now he’s an expert on all the intersections in Norwalk. I would suggest spending a few weeks looking at this area and then tell us it doesn’t work. I would also like them to spend $400K of our tax dollars on something more pressing (and yes, even though it comes from the State, it’s still our money, who do you think gave it to them!).
Lastly, I will be writing an email Mike Yeosock and again reaching out to Tom Livingston to remind them as to why this project was shot down a number of years ago. I tell you, these City officials are just trying their hardest to find ways to spend our money!

A traffic light should be put at the top of Devils Garden with a proper cross walk . Many kids walk this route and have to “run across highland when someone lets them go”. Which is extremely dangerous. Also it’s difficult to merge onto highland from Devils Garden when schools are let out. A light would alleviate this

I agree with you Rebecca that something needs to be done at Devil’s Garden and Highland. However, I’d vote for a stop sign. Somehow this City can’t figure out timing on their lights and it’ll probably turn in to a disaster at all hours of the day for no reason