Democrats win contests for Attorney General, Secretary of the State, Treasurer and Comptroller 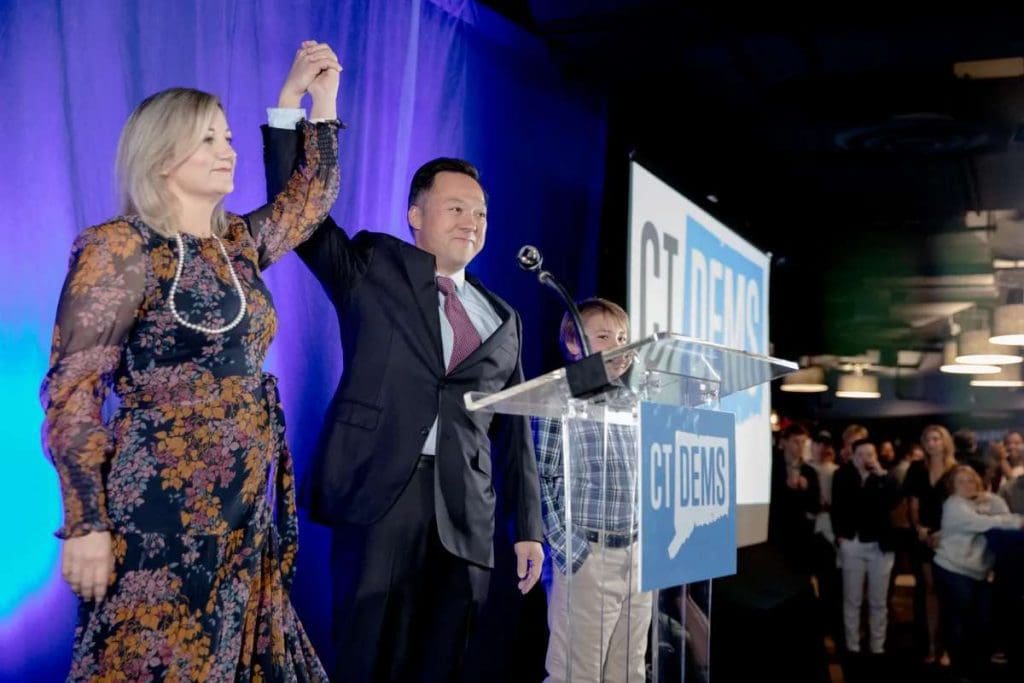 Attorney General with his wife, Elizabeth Tong, at the Democrats’ Election Night party at Dunkin’ Donuts Park in Hartford. “Because of this great state, our wonderful neighbors, our friends, our family, we’ve made a long trip from Park Street, a long trip from a hot Chinese restaurant kitchen to the Attorney General’s office,” he said. “It is my honor as your attorney general to help make us stronger.” (Yehyun Kim, CTMirror.org)

Democrats swept the races for Connecticut’s four constitutional offices — secretary of the state, treasurer, comptroller and attorney general — reinforcing the party’s grip on the state.

According to unofficial results, three of the four offices will be filled by newly elected officials — Stephanie Thomas for secretary of the state, Erick Russell for treasurer and Sean Scanlon for comptroller. Attorney General William Tong, the only candidate to officially declare victory on election night, won a second term in office, raking in 57% of the vote.

“We have to be affirmative in protecting Connecticut families who are getting squeezed every day by prices that are way too high — for electricity, gasoline, home heating oil, health care and health insurance, medicine and prescription drugs,” said Tong during a nine-minute speech at the Connecticut Democrats’ Election Night party at Dunkin’ Donuts Park in Hartford.

During his first term, Tong played a key role in the multistate negotiations with the opioid industry, recovering more than $300 million in opioid settlements for Connecticut. His office also settled Sheff v. O’Neil, one of the country’s longest running school desegregation cases, which began more than 30 years ago.

With 58% of the vote, Democrat Stephanie Thomas, a freshman legislator from Norwalk, defeated her Republican opponent Dominic Rapini, a marketing executive and resident of Branford.

The race focused on one of the secretary of state’s major responsibilities: managing Connecticut’s voters and elections, an issue that has received increased attention in the wake of former President Trump’s unfounded claims of voter fraud in the 2020 election. Thomas’ campaign centered on her commitment to expanding voter accessibility, including support for the ballot referendum that would allow in-person early voting.

Russell said he is committed to building on the state Capitol’s renewed focus on savings and debt management. While he has stated that Gov. Ned Lamont and the legislature’s majority have made strides towards this goal, Russell has expressed concerns over the administration’s decision to shift the burden of pension debt onto future taxpayers. Russell also spoke out against Lamont’s use of bond premiums to fund the debt service, which critics liken to using one credit card to pay off another.

As a member of the House of Representatives, Scanlon helped pass a one-time, $250-per-child state income tax rebate program, which sent more than $82 million to Connecticut families this summer. He said he would use the bully pulpit to continue lobbying for a permanent child tax credit and more state income tax relief for low- and middle-income households.

Congratulations to Norwalk’s Stephanie Thomas, our new Secretary of the State. She may be Norwalk’s first Constitutional Officer elected in my lifetime. She makes us proud every day. We are so happy that you will hold this important office.

Will anyone in Connecticut fight for the lives of the unborn!?😩🐣🙏🏼✝️✡️🇺🇸