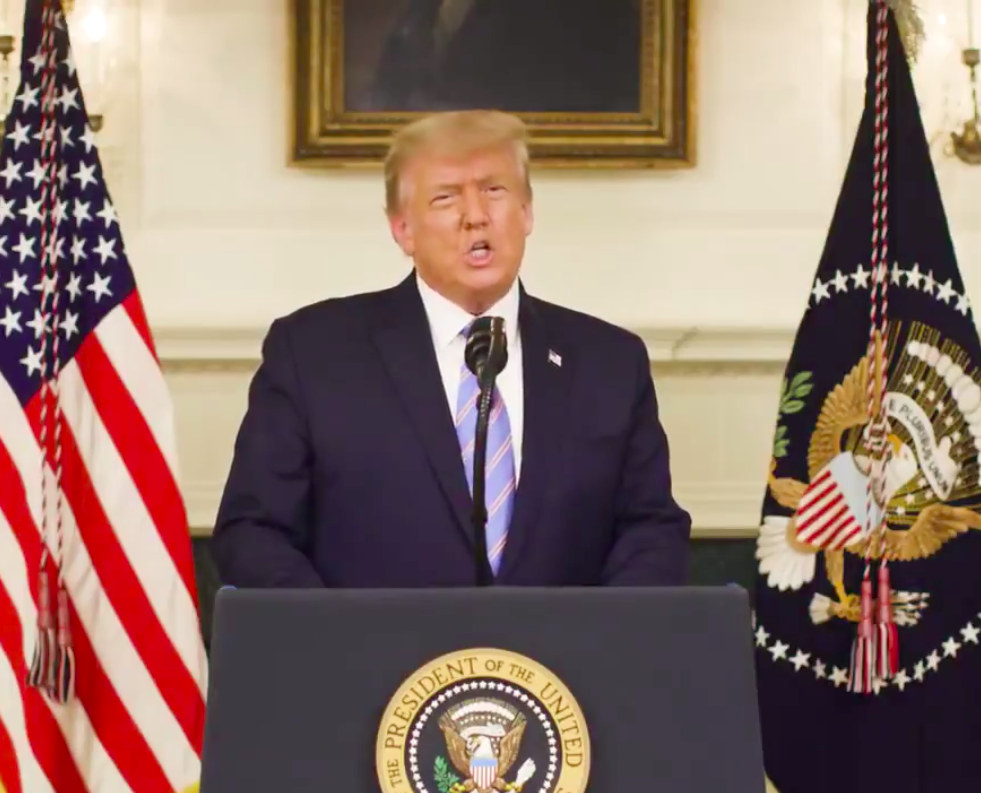 President Trump acknowledged his loss for the first time in a video posted Thursday night. (Twitter)

The clarion calls Thursday to remove Donald J. Trump from office drowned out a quieter reality: Even some prominent Democrats who deem Trump grossly unfit, including Connecticut’s two U.S. senators, are skeptical of being able to force him from the White House before noon on Jan. 20.

And that was before Trump acted Thursday night to undercut the growing clamor for his removal by acknowledging a new administration would take over on Inauguration Day and promising a peaceful transfer of power.

Avoiding more rioting was top of mind for the two senators.

“My singular priority, speaking very practically, is to assure the peaceful transition of power and protect against danger on January 20, when Joe Biden will be sworn in as the next president,” U.S. Sen. Richard Blumenthal said Thursday. “And as a practical reality, that is the most likely way Donald Trump will be removed from office.”

U.S. Sen. Chris Murphy was similarly doubtful that Trump would be impeached and convicted by Congress or stripped of power by Vice President Mike Pence and cabinet secretaries under the process outlined by the 25th Amendment to the Constitution.

Indeed, the New York Times reported Thursday night that Pence and some cabinet secretaries are disinclined, fearing it would only add to the chaos.

Murphy’s focus Thursday was trying to understand and prevent a recurrence of the stunning security failures that permitted the invasion of the Capitol by a pro-Trump mob on Wednesday, delaying the certification of Biden’s victory until 3 a.m. Thursday.

“I don’t know exactly what a sort of full investigative process will look like, but clearly, we need to make serious changes to the way that our Capitol is defended. And we need to start implementing those changes now,” said Murphy, who is about to become chair of a subcommittee that oversees the congressional budget, including its police force.

That gives him a key role reviewing why the police were so ill-prepared for demonstrations that were organized in plain sight: on social media, encouraged by a president who literally picked the time and place — the U.S. Capitol on Jan. 6,  the day of the election certification. On Twitter, he promised a “wild time.”

“’We came up with the idea to occupy just outside the CAPITOL on Jan 6th,’ leaders of the pro-Trump Stop the Steal movement wrote on Dec. 23,” Pro Publica reported Thursday. They called their Wednesday demonstration the Wild Protest, a nod to Trump’s tweet.

The president promised a wild time.

Murphy already has made preliminary inquiries in phone calls with the Capitol chief of police, whose resignation was announced Thursday night, and the Secretary of the Army. Murphy said the inability of the U.S. military to help the overwhelmed police defend the Capitol was troubling, even if the primary failure rested with Capitol police.

“We shouldn’t have to wait four hours to get Department of Defense assistance when the United States Capitol is under attack. So we’ve got a lot of questions that we need to ask,” Murphy said.

The senators spoke to reporters in separate conference calls on Thursday afternoon, a day when House Speaker Nancy Pelosi, D-Calif., and Senate Minority Leader Chuck Schumer, D-N.Y., threatened impeachment if Trump does not step down or is not neutralized by his own team using the 25th Amendment.

Blumenthal joined in their demands for Trump’s removal, even though he doubted they would be heeded.

And Trump then released a video in which he acknowledged for the first time that Biden had won, a step likely taken to further defuse the push for his removal. He also denounced the violence of Wednesday and promised a peaceful transition, something assumed of every president, until Trump.

The video was released as pressure on the president continued to build. At least nine administration officials, including two cabinet members, have resigned in protest since the riot at the Capitol, and the Wall Street Journal, a conservative newspaper owned by Rupert Murdoch, called for Trump’s resignation Thursday. While acknowledging that Trump’s actions were impeachable, the editorial board argued that forcibly removing him from office carries distinct risks. Instead, they said, “it is best for everyone, himself included, if he goes away quietly.”

“I support any constitutional efforts to remove him,” Blumenthal said. “Those efforts can include the 25th Amendment. I call on the vice president to invoke it and mobilize a majority of the cabinet to, in effect, declare him unfit. The plain fact is he is unable to discharge the duties of his office. He is a danger to Americans and to American democracy.”

Gov. Ned Lamont, a Democrat, said the images of the Capitol under attack were heartbreaking, but he was uncomfortable about forcing Trump’s premature departure.

“I really want this Congress to be focused on getting our country healed and better, both from a COVID point of view, and just bring our country together,” he said.

Connecticut’s two longest-serving members, U.S. Reps. Rosa L. DeLauro of the 3rd District and John B. Larson of the 1st District, said in interviews that Trump’s calls for supporters to stop the certification clearly instigated the insurrection.

Combined with his demand that Pence somehow transform his loss into a victory, both said the president is guilty of sedition.

DeLauro was in the House gallery with U.S. Rep. Jim Himes of the 4th District when the mob tried for enter the House chamber, only to be stopped by police who blocked the doors with heavy furniture, then aimed their sidearms at the rioters as they smashed glass panes, trying to gain entrance.

“I am open to what our immediate remedies are for removing him,” DeLauro said.

For several hours, the attack gave Trump what he wanted: It halted the certification.

But the Congress reconvened the state-by-state acceptance of the election results after the Capitol was secured. Pence declared Biden the winner at 3:41 a.m.

Before the release of Trump’s video Thursday night, DeLauro and others said Congress had received no assurance from the White House that the president would cease efforts to disrupt the transfer of the power, and they wondered if they could rely even on a personal promise from Trump.

“He incited them to go to the Capitol,” DeLauro said. “I don’t know that he knew or understood what he was doing, and nor does he care what the consequences are.”

For that reason, DeLauro said, Democrats are serious about exploring the politics and legalities of removal.

Democrats wonder if Trump’s ferocious criticism of Pence for not doing his bidding would prompt Republicans to consider pushing the president to relinquish his authority for the final 13 days.

Even stalwart Republican allies like Senate Majority Leader Mitch McConnell of Kentucky and Sen. Lindsay O. Graham of South Carolina said the vice president had no discretion in whether to accept election results that stood up to numerous court challenges and were certified by all 50 states. Their comments suggest a belief the president’s grasp on reality had slipped.

Larson said he keeps thinking about how President Richard Nixon was convinced to resign by fellow Republicans.

“In a different time, you would have Republican leadership go to see Richard Nixon and tell him that it was only going to get worse and he ought to resign. Well, we’re dealing with 13 days,” he said. “And I don’t know that there’s the same relationship with Trump and the Republican leadership.”

“You got to learn a little bit about him and how he was,” Larson said, pausing as he searched for the right word. “He’s a decent person.”