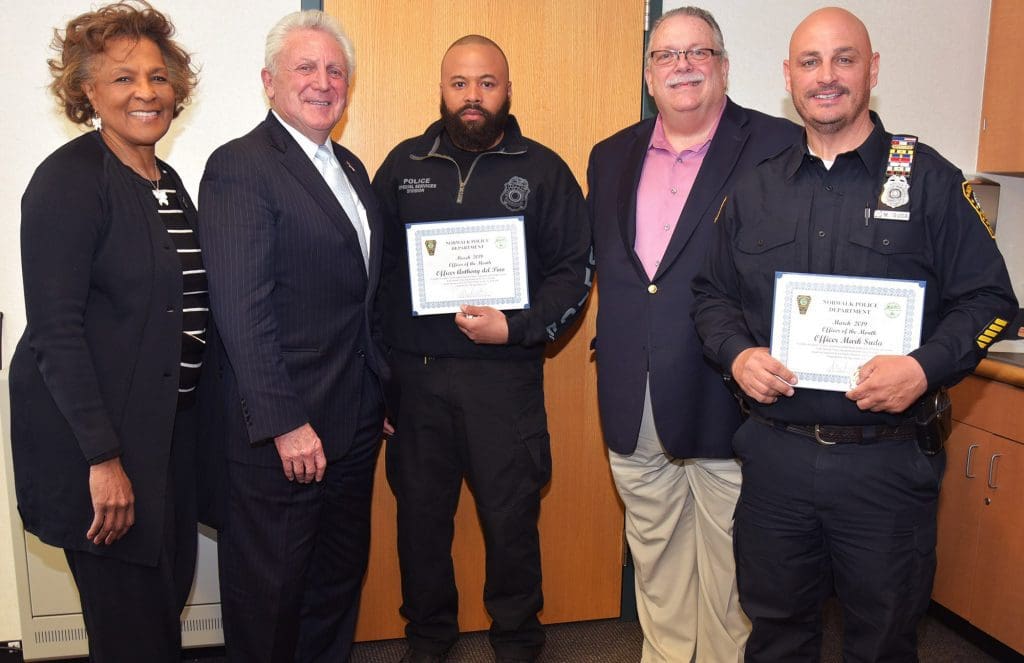 NORWALK, Conn. – Two police officers were named the Norwalk Police Department’s Officers of the Month for March in recognition of their arrest of an armed felon.

Officers Mark Suda and Anthony del Pino on March 29 were conducting a “proactive patrol” behind the Palace Theatre on North Main Street when a civilian advised them a known felon was selling narcotics in the area, Commander of Special Services, Lt. Marc Lepore, said in a summary of the incident.

Suda and del Pino located the suspect, Sentrell Bookhardt, who allegedly struggled with them as they attempted to search him for weapons.

Lepore told the Commissioners the arrest was notable because it was the result of information obtained from the public.

At the time of his arrest, Bookhardt was on federal supervised release and being monitored by the state after being released from prison on parole, police said.

Police identified him as a known member of the Norwalk MGs gang who was given a five-year prison sentence in 2014 for possession of an unregistered machine gun.

Suda is also Chairman of the Norwalk Republican Town Committee.

Wait, Norwalk has a MG gang?

Norwalk has long had the reputation of one of the finest Police Depts in CT and they deserve our deep ongoing appreciation. Which is why its so objectionable that Mayor Rilling can’t seem to take proper care of the family of an officer wounded 2 years ago. That sends out all sorts of bad signals about Norwalk. The news really has travelled about this incident.

Congrats to both on a job well done