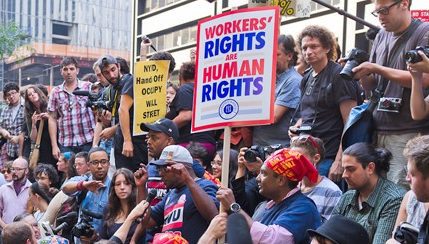 September 30th, 2011 (day 13) —Thousands of people packed shoulder-to-shoulder into Liberty Plaza this Friday, eclipsing the numbers on the first day of the protest. Some were no doubt lured by an (incorrect) rumor that Radiohead would be playing a surprise show. Whatever the initial motivation, attendence remained strong once it came out that there would be no celebrity guest. Members of the Transport Workers Union expressed solidarity with the crowd and joined the protest for the first time. (Mat McDermott)

As an executive board member of the Greater New Haven Labor History Association, I find it extremely important to know one’s history. As the saying goes… if you don’t learn from history, you are bound to repeat it.

While Labor Day may traditionally mark the end of summer, its true meaning has been lost over the years. We must take great pride in telling and educating our families, our friends, our neighbors and, yes, sometimes even our co-workers that the American worker and the American labor movement built this great nation of ours and to proudly proclaim that… “This is our country! We wake it up and make it run, every single day…and we put it to bed every night. And we do whatever it takes…no matter what the cost…and its time that we took America back!” It’s a message that must be told loudly and clearly, every day of the year, not just on the first Monday in September.

There is no doubt unions are under attack at a time when they are needed more than ever. Unfortunately, there are those like the Yankee Institute who, with untold amounts of dark money from shadowy right-wing donors, have bought themselves a bullhorn to try to overpower our voices. They have escaped the investigative reporters’ spotlight while their friends in the media trumpet this message and their friends in the legislature push legislation to advance their anti-worker agenda. They prey on the vast majority of workers in the United States who do not work under a labor contract. They prey on workers who are at-will employees, subject to the whims of management, who know no recourse. They prey on young workers who have limited union knowledge or experience. Their gospel is the gospel of greed and they wrap that gospel in the flag. They argue that the race to the bottom is the American Way.

The Greater New Haven Labor History Association, for one, is challenging this warped view of the American Way. It is poring over American Labor History to identify the lessons of labor history and to apply them to labor today. It recently waged a five-year campaign to secure passage of a labor history bill that directs the state’s Department of Education to make a labor history curriculum available to public schools across the state and is working to broaden that curriculum. At the same time, it is rolling up its sleeves and and taking the lessons of labor history to workers to help them secure the benefits of unionism.

It is our collective responsibility to show the people what a labor union is, where our strength comes from, who the union belongs to, what collective bargaining is and what we mean by union solidarity. As recently stated in the Economic Policy Institute report How Today’s Unions Help Working People: “Unions improve the lives of all workers. Unions raise workers¹ wages and strengthen their rights at work.”

But, above all, “they give working people a voice in our democracy” and an opportunity to share in the American Dream!

John Dirzius is the on the board of the Greater New Haven Labor History Association.

Just a note: NON readers should know John Dirzius was a union officer making well over six figures before he retired in 2019.Not exactly a neutral voice on unions and the American dream. I’m surprised he didn’t mention that in his bio

Another selection on NON today states that the unfunded pension liability for state employees is almost $10,000 for every man, woman, transgendered, binary and child in this state. I’m all for unions, let’s not go bankrupt

Transgender? Binary? These are classifications, not genders.