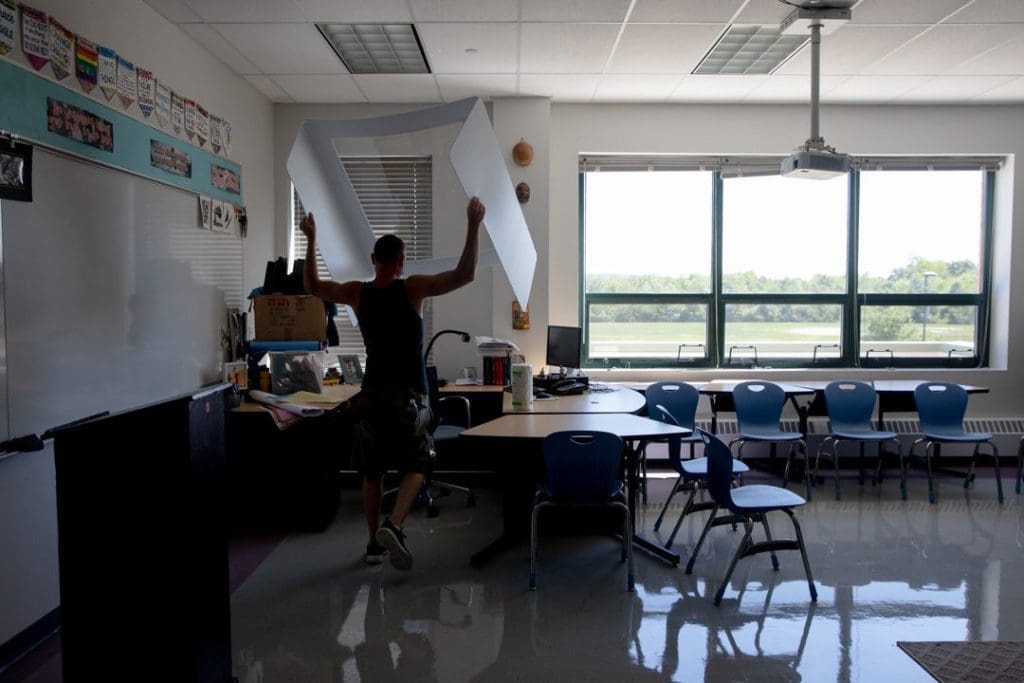 Eric Marston, custodian, carries a desk shield for teachers in a classroom on Thursday, Aug. 20 at Middletown High School. Custodians who worked the second time shift before the pandemic will instead work the first time shift to meet an increased need for cleaning at one time, said Marco Gaylord, chief of school operations. (Yehyun Kim, CTMirror.org)

Union officials representing more than 60,000 school employees demanded Monday that districts implement a host of costly safety procedures they insist are necessary for schools to reopen.

Unable to strike in Connecticut if the protocols are not followed, union members called on school officials to reverse their decisions to open for in-person instruction if they cannot meet the 13 “non-negotiable” safety measures  they outlined Monday. They acknowledged they have little leverage even though many districts are far from meeting their standards.

While teachers and staff in other parts of the country are considering striking over school reopening plans, Connecticut’s unions are hoping district leaders come to the table to make appropriate changes. In Florida, where COVID infection rates are high, a federal judge ruled Monday in favor of the union suing to block a state order to reopen schools.

“It is vital for the state and school districts to hear our concerns as frontline employees,” said Cynthia Harris-Jackson, local AFSCME president and a nurse at the Conte-West Hills Magnet School in New Haven. “If we can adopt these significant core principles and work together, we can better ensure a safer environment for students, staff and families.”

Most of the measures outlined by the union are costly — such as putting monitors on every school bus and only allowing one student per row — which could lead to schools needing more buses. They are also requesting that students remain six feet apart at all times. For many schools, this could mean reducing class sizes and hiring more teachers if not enough students opt for online distance learning.

Other demands include the creation of joint COVID labor and management committees in every school district; only allowing “trained health care workers” to administer COVID-related care to students; delaying in-person learning until all staff (including temporary and substitute teachers) have been trained in safety protocols; and requiring food service workers to comply with restaurant COVID-19 protocols.

Union members said they are concerned there are still districts that do not have enough PPE or proper utilities in buildings, which could result in COVID-19 easily spreading. Katy Gale, Connecticut Education Association (CEA) board member and a 5th-grade teacher at Hindley Elementary School in Darien, said there are classrooms in her district with no windows or ventilation.

“If this can be true in a small suburban town like Darien, you can only imagine what my colleagues in small rural towns with less funding or in large urban [communities], like my own city, Stamford, or Waterbury, or New Haven have going on in their aging buildings,” Gale said.

During his daily briefing Monday, Gov. Ned Lamont addressed this concern and said the state will be checking back with districts to make sure the schools are following protocols.

“I’m not rushing people back. We always lead with public health,” Lamont said. “I’m doing everything I can to make sure these kids get an opportunity to have a real education, and that involves socialization and in-person learning as long as you can do it safely.”

Both the state and federal government have issued guidance for opening school, but both have stopped short of making any of it a requirement by either attaching money or issuing fines if certain protocols are not followed. Superintendents were also told Friday how much additional funding they will receive in order to safely reopen, but it is only a fraction of what schools requested. Of the $420 million districts told the state they will need to open safely, $130.8 million will soon be distributed by the State Department of Education.

The safety measures requested by the unions Monday are a continuation of ongoing pushback from teacher unions since the governor gave the go-ahead for districts to reopen schools. Union members said during the press conference they initially thought state and local officials would recognize the validity of their concerns and make proper accommodations for reopening. Instead, they said, the school year is about to begin and their concerns have still not been addressed.

“The purpose of today’s event was to reiterate our call for the governor’s administration and the education department to step up on behalf of all our school communities. District officials in Norwalk and across Connecticut need thoughtful guidance, clear oversight and adequate resources to be able to assure a safe reopening,” Norwalk Federation of Teachers President Mary Yordon said Monday evening in an email.

Yordon did not attend the virtual briefing.

“Last month, thousands of our members turned out in over two dozen car caravans across the state. Their message was ‘fund our future’ on behalf of our students. Many of our superintendents, building principals and school board officials joined us because they agree,” she wrote. “So today was about making sure that Governor Lamont and Commissioner Cardona understand that our students need that lifeline now, more than ever.”

“Our members must be part of the solution,” said Shellye Davis, vice president for paraprofessionals and school-related personnel at American Federation of Teachers Connecticut, during the press conference. “State and district level education policies and directives are only effective when developed with us, not to us.”

Remember when Reagan fired the Air line Contollers? We thought they were vital too. Turned out, not so much

If we don’t have the money, let’s just home school all these kids. The mismanagement of this crisis may start at the Federal level, but it’s obvious that unions and local governments really have no idea what can practically work. My advice to parents: Step up and help your kids learn from home or get a voucher and send your children to parochial or charter schools. This seems to be a good time to debate school vouchers. #Prochoiceforeducation

PATCO 1981 seeking higher pay for a stressful but already well paid job (it also did create some havoc at the time), Teachers unions (one they’re not going on strike so you can’t fire them) seeking to ensure the safety or their members, students and others…BOEs and Superintendents are running scared from the same people who said this pandemic was a hoax and followed our idiot leader to where we are now.. The same fools who said reopen in April and then patted themselves on the back before the Covid numbers went thru the roof. Bonnie, Teachers Associations aren’t trying to leverage the situation but improve it so that the reopening of schools actually works. I imagine if those BOEs and Superintendents were advised that Workers compensation applied to teachers who got sick, disabled or died they’d put in the proper procedures including properly cohorting

The unions need reform. I am so tired of them standing in the way of our kids education. UNION REFORM. We listened to unions this past spring and it was a disaster. Covid is not going away. We need to learn how to manage it and kids need to go back to school and town hall needs to open. People who don’t want to go back should take a leave of absence.

Nora, I can’t help but notice your constant posts on this site that demand that kids go back to school and teachers suck it up and, if they don’t like it, quit. You even fancy yourself an essential worker in one of these recent articles, but I can’t help but notice that most of your timestamps on posts are between the hours of 9-5. Interesting use of company time. Perhaps YOU should retire, since you regularly peruse news articles and take the time to comment during company time.